We may have to deal with another intrusion of the polar vortex in just a handful of days.

Shown above is the GFS ensemble mean forecast of 500mb height anomalies over North America. We see a situation eerily similar to the one that brought about the severe cold in early January 2014. We see a Rossby Wave pushing north into eastern Alaska and Canada, as the strong positive 500mb height anomalies shows. As a result of this strong high pressure, we see a lobe of the polar vortex dropping to the south from Canada. This lobe of the vortex is illustrated well by the deep greens and low contour numbers superimposed on those deep negative height anomalies.

The GFS Ensemble 850mb level (5,000 feet level) temperature forecast for that same timeframe shows how cold conditions may get if this lobe of the polar vortex decides to scrape the United States just to our north again.

The GFS Ensemble Control 850mb temperature anomaly forecast is even stronger, with anomalies as low as -28.4 degrees Celsius in the core of the lobe of the polar vortex.

There's good reason to be concerned about a second intrusion of a lobe of the polar vortex: The Lezak Recurring Cycle supports it.

The Lezak Recurring Cycle, or LRC, is a tool developed by meteorologist Gary Lezak that, in essence, can enable forecasters to predict the overall weather pattern months in advance. The gist of the LRC involves a cycling weather pattern that develops in October and November of each year; no pattern is the same from year to year. Around mid November, the LRC begins to repeat, meaning we start to see a similar weather pattern in mid November that we saw in early October. This means that the cycling pattern has begun, and it will continue to cycle on a regular, somewhat-unchanging 40-60 day interval for the next ~10 months before it dissipates over the following summer. This season, the length of the LRC has been pegged at 57 days. If we take the January 6th date and move ahead ~57 days, we arrive in the timeframe of late February, a couple of days within the very cold weather the GFS Ensembles showed above. Considering the LRC has been an efficient tool of use in not only this winter season, but in prior winter seasons, this is likely a real threat of a lobe of the vortex coming south once again.

•The atmosphere looks primed for a strong cold blast in late February that will likely produce anomalously cold weather.

A Kelvin Wave currently moving across the eastern Pacific appears to be trying to provoke an El Nino, but the rest of the atmosphere is in disagreement.

The graphic above shows water temperature anomalies across the Equatorial Pacific, with longitude values on the bottom legend and depth values in meters on the left legend. The Kelvin wave is clearly shown by the strong positive water temperature anomalies from the 100 to 200 meter depth in the central/western ENSO monitoring area in the Equatorial Pacific. With a Kelvin Wave, you have a mass of warm water pushing east under the surface, and pushing east across most (if not all) of the Equatorial Pacific. This wave warms the waters below the surface, and if those subsurface waters are mixed to the surface, we can see an El Nino develop. Due to that process, Kelvin Waves are typically associated with El Nino formations, and that is why we are monitoring this event for possible El Nino provocation down the line in spring.

However, the rest of the atmosphere does not agree that we will see an El Nino anytime soon.

One feature we see over the Eastern Pacific is a swath of anomalously strong upper level winds, as the purples and yellows on the attached image denote. Thanks to the Earth System Research Laboratory (ESRL), we can compare these uppr level winds to see what ENSO state the atmosphere is currently in- a La Nina, El Nino, or neutral-ENSO state. 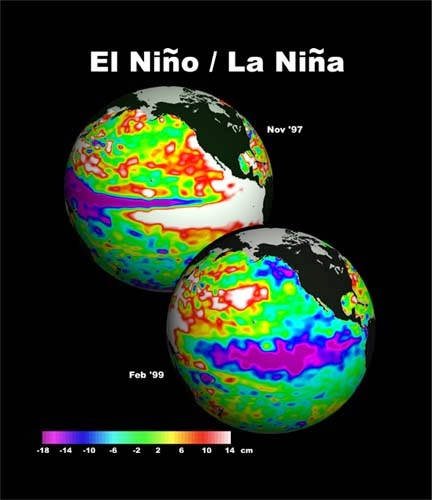 Taking a glance at the latest observed sea level anomalies, it is more apparent that while we aren't in an El Nino, which would show up as a swath of yellows and oranges to indicate higher than normal sea level anomalies, we also aren't in a defined La Nina, which would appear as a swath of deep blues on the right hand side of this chart. We do see some blues in the Equatorial Pacific, which could argue for a weak La Nina if you really want to be picky about it, but I'm not really seeing any defined ENSO state going one way or the other.

This chart, showing the anomalous depth of the 20 degree (C) isotherm over time, gives you a hint at what the progression of a Kelvin Wave looks like, with two clear examples of Kelvin Waves observed in November 2013 into January 2014, and from September 2013 into October 2013. The latest observation of this 20 degree isotherm confirms that we are looking at a Kelvin Wave. with this wave looking to be the strongest out of the last three events. It's possible that this sends us into an El Nino pattern when spring and summer come around, but for now, an El Nino does not look to be on the way, at least for the near future.

Andrew
By Andrew at 4:56 PM No comments: