I got a lot of criticism for releasing my original post on the potential for a New Year's Day storm, but such criticism doesn't deter me. I do these posts in the interests of YOU, so you won't be stranded on a big day like New Year's after a surprise storm comes through.

Above, we see the 24 hour forecast from the Ocean Prediction Center (OPC), the oceanic branch of the National Oceanic and Atmospheric Administration (NOAA). This chart depicts 500 millibar forecasts, with depressions and 'L' signs in the image characterizing low pressure areas, and arcs and/or the letter 'H' signifying high pressure areas. In this forecast, we see not one, not two but THREE separate storm systems in the western Bering Sea. (If you want to get technical about it, there is only one, but eventually the other two will find their way in there.)

This forecast map is valid December 11. If we take that date out 18-21 days, we end up with a timeframe of December 29-January 1: Right in the middle of holiday traffic, potentially right on New Year's Day. If this rule (called the Bering Sea Rule) is put into effect here, and these three storms follow said rule, we could see quite a stormy period in the days leading up to New Year's Day.

There is growing potential for a winter storm during the timeframe of December 18-21. Let's see what the models are saying. 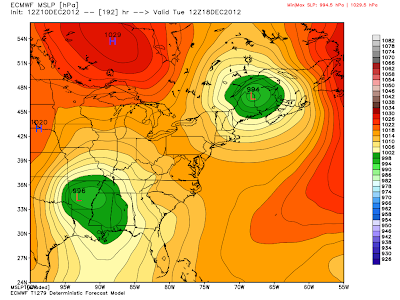 This is the European's ECMWF model, and here we see a storm system coming out of the South Plains with a central minimum pressure of 996 millibars. Looking at the atmospheric set-up surrounding this system, we see a strong high pressure system in south central Canada, so that makes my enthusiasm for an Ohio Valley hit go down slightly. However, watch that extended dark orange color, as we could see a high pressure try to form in that region, which could provoke this storm slightly to the north. 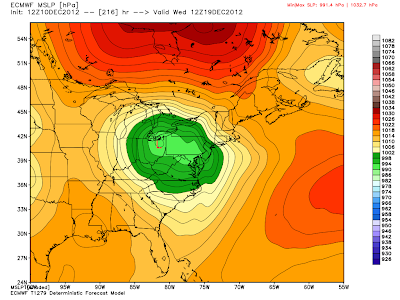 Advancing 24 hours to the morning of December 19, we see that this system has moved north and actually into the Ohio Valley, thanks in part to a developing high pressure system in the Gulf Coast and what appears to be another high pressure system to the east of this system. The storm system in question is now predicted by the ECMWF to be 991 millibars, a pretty strong storm. Notice how it is more elongated than compressed, with those 991mb values trying to push east into the Mid Atlantic. This could be a sign that the system wants to split, but that's too far out for me to be confident in deciphering. 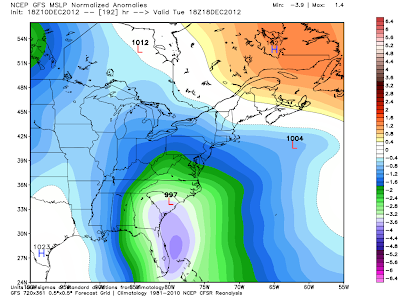 I can't say I'm sure what the GFS forecast for the afternoon of December 18th is showing. It does have a low pressure system in the picture, but the GFS has the system just offshore Florida in a bizarre set-up that could turn into a nasty Nor'easter. I have no idea what the GFS is doing, but to entertain those in a snow drought, let's move on. 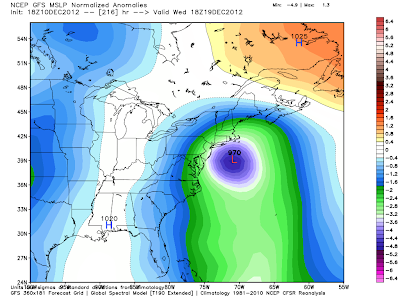 Wow. The GFS bombs out a storm just off the Mid-Atlantic coast on the afternoon of December 19th. Again, this is pretty bizarre. I'm just not even sure what to say about this forecast other than... wow.


(Originally posted Dec. 9, edited slightly) The Lezak Recurring Cycle, or LRC is involved in this situation. Using the 53 day LRC timetable, I traced back December 18th to October 28th, and here is the 500mb pattern observed that day.

Look at that! We see a strong system in the Ohio Valley on this day, as well as a weak high pressure system in the Southwest indicating a possible positive PNA. There is a negative NAO in place, though we can't tell whether it is west or east based. Does this look familiar to the first image shown? You bet. It looks like our 53 day cycle is working.


The models are having some trouble, so let's go a day ahead to October 29th and see what happened.

Our storm system has now moved to the east, wobbling a bit as it did so, and combined with Sandy. Notice we still had our positive PNA showing itself with high pressure in the West US. If we were to follow this system and discount Sandy, I still believe an eastward movement would have prevailed, likely not as fast if Sandy were not present. The lack of Sandy in this potential storm system, combined with a positive PNA and east-based negative NAO leads me to believe that this forecast system should go a little more to the north and east than it did in October.

Looking at this 53 day timetable, I think I know why the GFS is acting so weird. It is trying to imitate Sandy in its forecast, with a strong storm system sliding up the coast. However, I highly doubt such an event will happen- the GFS is likely playing its games.

The models are converging on the potential for a winter storm during the December 14-17 timeframe. 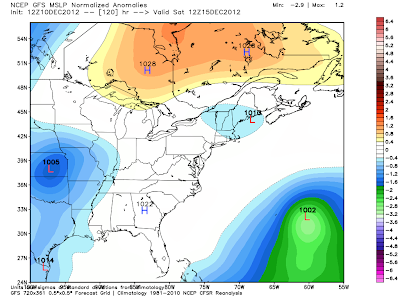 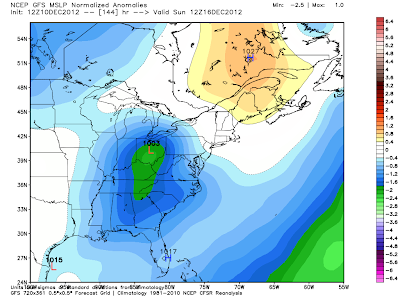 24 hours later, on the morning of December 16th, we see that our system has taken the path it should with two high pressure systems on either side. The storm system has moved into Ohio, with the central minimum pressure now at 1003 millibars, still fairly high for a storm system, indicating it is weak. At this point, it could go one of two ways- out to sea in a due-east path, or shoot north into Canada. It will come down to the placement of this 1027mb high pressure system in Canada. Personally, the more climatologically-favored path would be east and possibly up the New England coast, but we'll have to wait to see what future forecasts say. 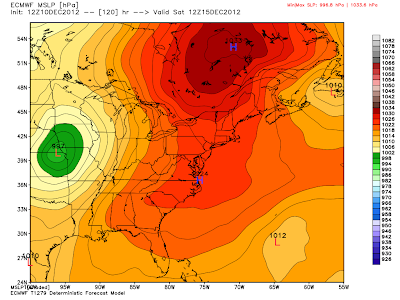 Unlike the GFS model, the European's ECMWF model shows plain values of SLP, rather than anomalies. The ECMWF ejects this system from the West as a pretty strong 997 millibar system. It is also a bit further north than the GFS' 120 hour forecast (this ECMWF forecast is also for 5 days out), but the main issue is strength difference. We see two areas of high pressure to the east, one in the Mid Atlantic and one in Canada. The system has to go somewhere, and that 'somewhere' will be towards the weaker high pressure system. 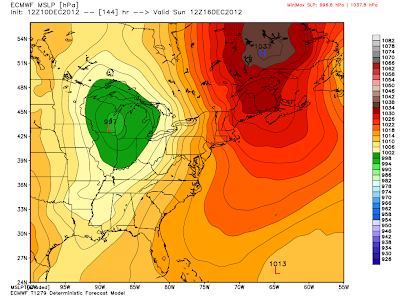 The Hour 144 forecast from the ECMWF model has the system diverted to the northeast, because a storm system won't just hightail it right at the weaker high pressure system- it will still be diverted. This storm is now in southeast Wisconsin, with a minimum central pressure of 997 millibars, unchanged from the previous forecast. Obviously the ECMWF is further north than the GFS, but I don't want to mess with that right now.

Andrew
By Andrew at 5:25 PM No comments: