This is a discussion concerning the latest ENSO conditions.

The latest sea surface temperature anomalies displayed in the image below indicate significant warming has occurred in the eastern and central portions of the ENSO regions of Niño 1+2 and Niño 3. Recently, we have been seeing an increase in temperatures across western portions of the ENSO regions with what appears to be a cooling trend across Niño 1+2 and a bit into Niño 3. Niño 3.4 and Niño 4 appear to be warming, with Niño 3.4 warming more than the other regions, indicating that the incoming El Niño could be more central based to western based.

The GLAAM, shown below, has been tanking negative lately, an increasing sign of an oncoming El Niño. Considering the GLAAM is getting so strong now, some El Niño effects may begin to be shown, with some more precipitation being directed towards the Gulf of Mexico coast and East Coast.

The SOI has been negative as well, signaling an El Niño with a 30 day average of -12. 8 or more defines a La Nina, while a -8 or less shows an El Niño. It is not tremendously negative, indicating that a full blown El Niño is not present just yet, but appears to be on the verge of making its presence known.

The Quasi Biennial Oscillation (QBO) is strongly negative at this time, down to -21. Tropical convection is deeper in a negative QBO, which can indicate an El Niño.

In summary, the atmosphere appears primed to fall into an El Niño state. I will have more information on this in coming days and what this means for winter. 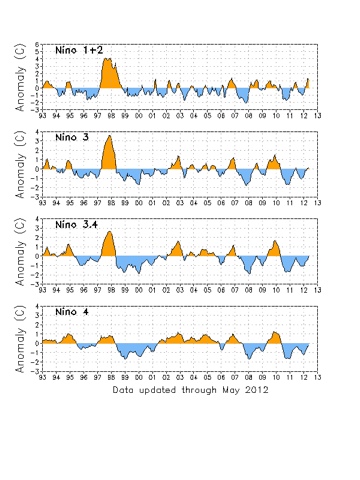 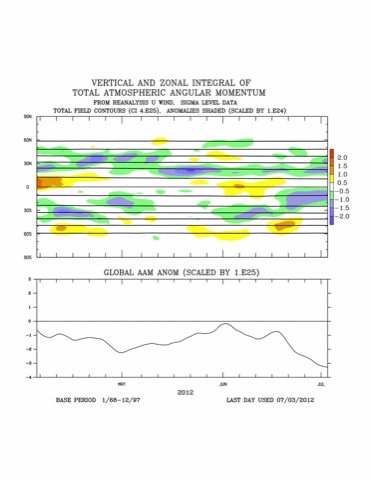 The CFS forecast of the MJO is predicting the MJO to fall back into Phase 8 into 1, which can be supportive of hot conditions across the country. Considering there is such a spectacular high pressure system across the country, if the MJO circles back into Phase 1, as many models are predicting, this would only enhance potentials for more record breaking conditions.
This will have to be watched very closely, as many cities have experience their hottest days ever, and this could continue should the MJO be favorable. 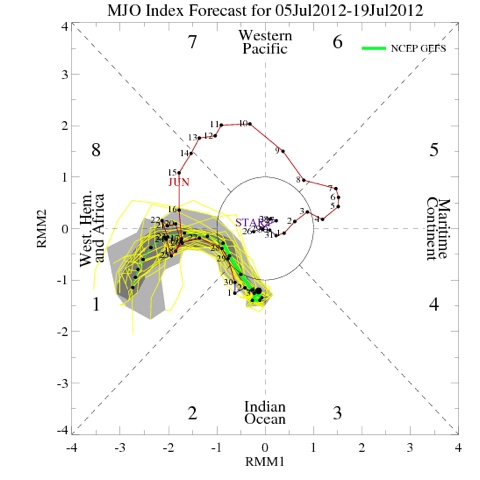 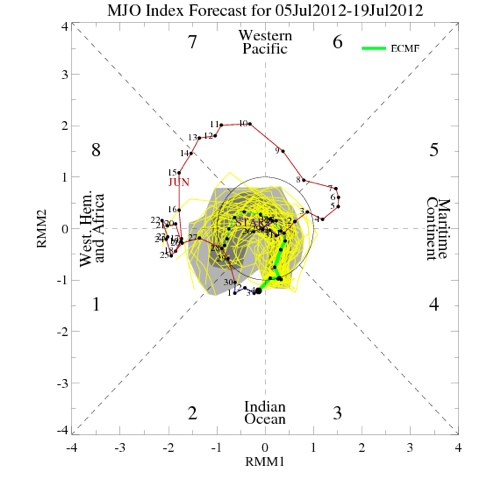 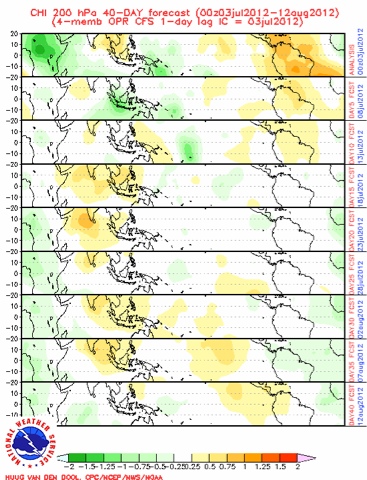 What Will Happen if the Hot Weather Settles In?

Many are wondering when the ridge of high pressure responsible for both drought and high temperatures will move out. Unfortunately, the ensembles are not supporting a regime change anytime soon. So I pose the question: What will happen if this ridge settles in to stay?

-Drought
The drought will worsen as the monster high pressure system keeps storm systems away. The heat will only add to plants wilting and increasing the likelihood of serious crop damage.

-Severe Weather
Storms happen to form on the edge of high pressure systems, and these stow can be severe, like the derecho observed a few days ago and the strong Chicago storm cell. This would continue across generally the Northern states, where the atmosphere is just right for storms to form.

-Short Term Climatic Shift
I find it very possible that the atmosphere has something up it's sleeve. This strong a ridge of high pressure is rarely observed, which tells me something special is happening. I can see a short term (summer-fall 2012) climatic change/shift, where hot weather may become commonplace, or severe weather every day or something along those lines. This ridge will take a lot to move.

The Mid Atlantic is outlooked for a severe weather threat on Sunday.

Discussion
0z GFS model guidance indicates the presence of 3000-4000 j/kg of instability present on Sunday over the Mid Atlantic region. Considering this area resides close to the mountains, any air that is pushed up the mountain slopes could very well ignite a thunderstorm. Lifting oughtn't be an issue due to the presence of these mountains.
Concerning the tornado threat, there looks to be minimal rotation due to the mountainous terrain. With such high instability, I am confident that the main threats will be damaging winds and hail. 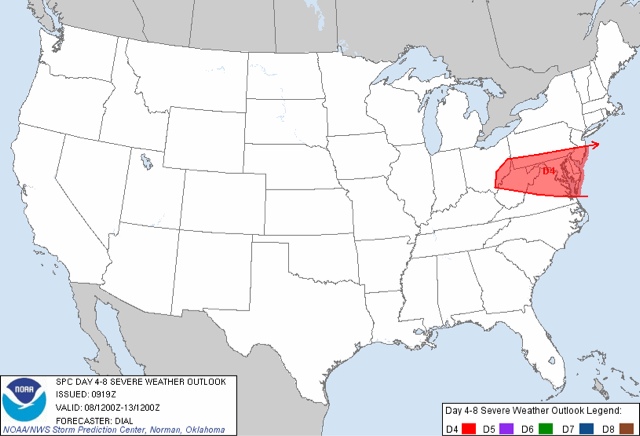