2 Feet of Snow Yet To Fall in WV 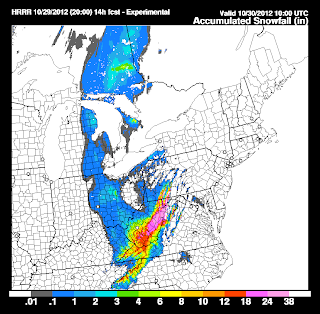 As Superstorm Sandy continues to barrel into the Northeast and Mid-Atlantic, West Virginia is still under the gun for over 24 inches of snow in the next 14 hours.

The HRRR, or Hi-Res Rapid Refresh model, is a short range model used for forecasting events that are in the 0-15 hour timeframe. This is the 14 hour total accumulated snow for the Northeast, and as you can see, West Virginia gets absolutely crushed with another 2 feet of snow yet to fall on top of snow that has already fallen. Should this forecast verify, some isolated locations could be flirting with the 3 foot mark- quite a way to start the winter season.

Also of note is that Ohio and Michigan could get some snow in the next 14 hours. Ohio could get 1-3 inches in the western half of the state, while eastern Michigan could get as much as 2 inches in spotty areas. This is only going to be a major event for West Virginia- all other areas should get minor accumulations.

Andrew
By Andrew at 6:15 PM No comments:

The El Nino, once thought to be gone, has made a sudden reappearance in the face of what could have been a growing threat of a La Nina.

This past week has brought a new body of warmer than normal water over the western ENSO region, and this can only mean one thing: the El Nino has returned. I declared a few months ago that the El Nino was dead, and I stand by that post. What it did was die off on the surface but remain 'dormant' underwater. It is only now that we are seeing this underwater warm pool move towards the surface, and in response we see this new El Nino-style body of water.

Remember when I started saying that there was cooling that resembled a La Nina? Well, it died off. It's still there, and you can see the blue blob off the coast of South America on the image above. However, as it began moving west, there was no sustained cooling in its original formation along the coastline. That said, this scare is over.

So, all is back to normal. The El Nino seems to have returned, and will strengthen if the underwater warm pool continues to move towards the surface. Considering it's west-based this time around, the temperature anomalies favor a warm West US and cool East US, as shown below. 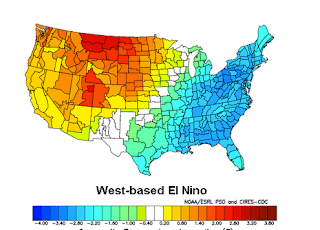 What The LRC Is Saying About This Winter

The above image is of observed precipitation and storm tracks, with the strength of those storms on the bottom of the image. All you might see is lines and colors. But this actually holds the key to deciphering the LRC, or Lezak Recurring Cycle.

But before we sort this all out, what is the LRC?

The Lezak Recurring Cycle is:
•A weather pattern that sets up every year.
•This pattern is NEVER THE SAME from year to year.
•Pattern sets up in late fall-early winter.
•The LRC cycles (repeats) through the winter and spring from the original pattern in the fall.
•Each cycle is 40-60 days.

For example, if a system were to go through the Midwest in mid October and brought a lot of rain to the region, you might see the storm again in December (40-60 days later) in the Midwest again with a lot of precipitation. However, strength and track varies with each cycle.

Looking at the graphic above, we see a lot of lines going through the Plains and Midwest. This correlates well with the precipitation being centered in the southern Plains and Midwest. If we put the LRC to use in this 30 day observation, one would think that the Midwest and Plains will bear the brunt of storms this winter.

And here's the thing- I believe it.

A consistent positive Pacific-North American (PNA) phase makes for a wet and stormy Midwest and Northeast. The PNA was observed to be variable in the last month, but a consistent negative North American Oscillation (NAO) changed the jet stream to give a lot of cold to the East US. If we put these two together, we get a wet, cold East US.

Things are still developing, but this is a great sign for those wishing for a snowy winter in the Midwest and Plains.

Superstorm Sandy Closing In on Northeast

There is a pretty sturdy eyewall surrounding this center, and cloud tops on this infrared imagery are colder than its surrounding convection to the west.

As the storm moves further west, water is expected to rapidly move west as well, likely flooding out beaches and going inland. However, the big concern is high tide. High tide is expected to occur this evening, between the 8-9 PM hour. When this happens, it is likely that the worst flooding of this storm will occur. Storm surge as high as 12 feet, combined with high tide, extreme winds and heavy rain will lead to a perfect combination of a terrible flooding situation. 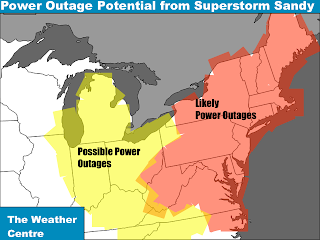 I am expecting widespread power outages across the entire Northeast and Mid-Atlantic as Sandy comes ashore. These outages are most likely along the coast, and that is where outages should be the most widespread. I feel that New York City will also bear quite a brunt, and Long Island will definitely get in the action. However, the worst power outages will be in New Jersey and the Delmarva area.

There is a less likely area of power outages to the west, where cities like Chicago, Detroit and Louisville are at risk. However, the chance of a power outage is less likely than that compared to the Delmarva area. The plain fact is, power will go down across the Northeast. This power will be out for over a day, possibly up to a week in the main impact zone, where Sandy will make landfall. 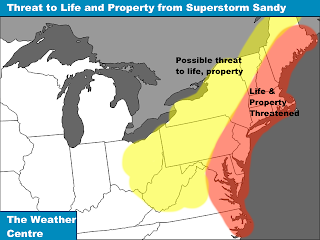 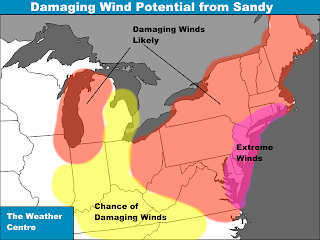 As far as damaging wind potential goes, there is a chance of damaging winds in the western Ohio Valley and Kentucky into Tennessee. These are the areas where winds will be the least damaging, and should not be the biggest deal on the nation. The bigger deal is found in the Great Lakes and most of the Northeast, where damaging winds are likely. I outlined the Lake Michigan coastline, as winds over 60 MPH are likely on the water. In the Northeast, winds rivaling 75 MPH are likely, especially near the coast. For areas right along the coast, including Long island and New Jersey, I outlined an 'Extreme Winds' area, where I expect winds to flirt with 100 MPH. As outrageous as it sounds, this system has SUSTAINED winds close to 100 MPH, to gusts to the triple digit benchmark is definitely within the realm of possibility.

This is dangerous. If you haven't evacuated and you were ordered to, your life is at risk. Those who stay behind and are near the landfall zone are facing a very serious and catastrophic event, where lives are definitely under the gun.

THE FOLLOWING MESSAGE IS TRANSMITTED AT THE REQUEST OF THE
LOUISVILLE METROSAFE.

LOUISVILLE METROSAFE NOW ASKS THAT PEOPLE LIVING WITHIN A TWO AND
A HALF MILE RADIUS OF DIXIE HIGHWAY AND KATHERINE STATION ROAD
SHELTER IN PLACE UNTIL THE ALL CLEAR IS GIVEN. A TRAIN CARRYING
HAZARDOUS CHEMICALS DERAILED NEAR THAT LOCATION EARLIER THIS
MORNING. TO SHELTER IN PLACE...CLOSE ALL DOORS AND WINDOWS AND
TURN OFF ANY SYSTEM THAT PULLS IN OUTSIDE AIR. STAY TUNED FOR
UPDATES.