Mid-level vorticity analysis reveals that the two pieces of energy that will combine to form the Nor'easter are currently moving in their projected directions, and should merge in just a handful of hours.

It is expected that the rather strong piece of energy in Texas will shift eastward, as that system in Canada drops to the southeast. As we go through the next day or two, the two pieces of energy will merge and shift northeast to provoke a heavy rain event and substantial snow event over parts of the Northeast and Mid-Atlantic. 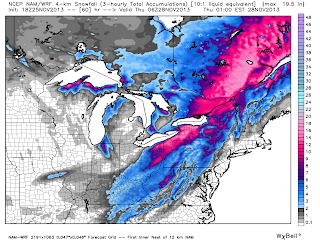 Snowfall forecasts over the next 60 hours have totals either flirting with or above the 12 inch mark along western New York, west Pennsylvania and northeast Ohio. Lighter amounts are anticipated in the higher elevations in the New England area, but will still allow for plowable amounts. Lower elevation areas should receive a couple of inches from this system, while coastal areas will receive some major rain amounts. 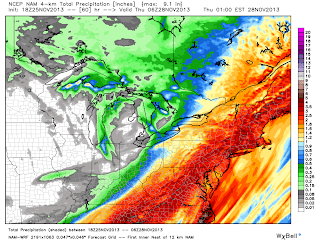 Rain amounts along the coast should push above 2 inches, making this system quite a wet one. I find it possible that some areas will experience flooding, though I'm not sold on a huge flooding event. The more likely scenario is rather heavy rain for most of the Eastern Seaboard in the Northeast and Mid-Atlantic, with lighter amounts inland. Bear in mind that while this forecast shows significant precipitation for the inland areas in line for snow, it's likely that the snow will be heavy, as this is only November, thus light, fluffy snow is rather unlikely. 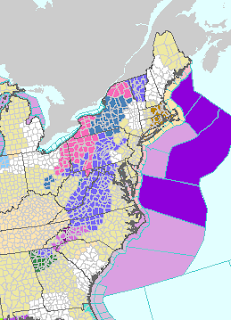 Stay tuned to your local weather service if you are at risk of this winter weather. Winter storm watches (navy blue), advisories (purple) and warnings (pink) have already been hoisted across the Northeast and Mid-Atlantic as this first snow event begins to unfold.