This is a 8-10 day 500mb height anomaly forecast by the ECMWF on the left, and GFS on the right. Both initiated at 12z today.

A weak El nino is characterized by a trough in the Eastern US and a ridge in parts of the Western US. On the right, in the GFS, we see a deep trough in the East Coast, as well as a ridge pushing into the Southwest and Plains. This is very typical of an El Nino, and I do not dispute that the atmosphere is indicating that the El Nino is beginning to take hold.

On the left side, we see the ECMWF. It has a major ridge of high pressure in eastern Canada, with what appears to be a trough pattern in the Southeast. However, note the depression of height anomalies in the Northwest. This is not a sign of an El Nino- a ridge should be in that area.

In this case, I would trust the GFS more. Notice how both models have a ridge near Greenland, known as a negative NAO. Both have the ridge on the western side of the land mass. A negative NAO will typically consist of a stormy pattern in the East, like what the GFS is showing. That said, the GFS appears to have a more reasonable scenario, and that is one I would like to believe at the moment. 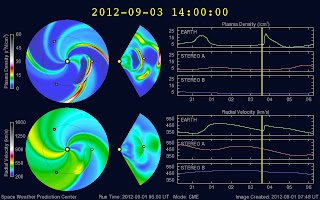 A coronal mass ejection (CME) is heading towards Earth at this hour, with the model above showing the disturbance as a band of colors on the top left image. Earth is the green dot.

A coronal mass ejection, commonly called a CME, is a burst of energy that the Sun spits out in all directions. Sometimes, Earth falls into the path of a CME. Most are very small and don't cause any effects. However, sometimes, there will be a strong CME, that will  hamper radio communications and have effects on the power grids. Again, this depends on strength.

The model above is showing the strike time of this CME on Tomorrow, Labor Day, in the late morning hours. Earth does not appear to be in the direct path, so effects will not be too extreme. Watch for some radio communication issues and slight fluctuations in power grids, especially at northern latitudes. The Aurora Borealis may also extend farther south than normal.

Andrew
By Andrew at 9:40 AM No comments: