The image below is the Planetary K index, which can show of geomagnetic storms that are ongoing here on Earth. As you can see, the anticipated CME (Coronal Mass Ejection) has hit the earth, and will continue through the night. 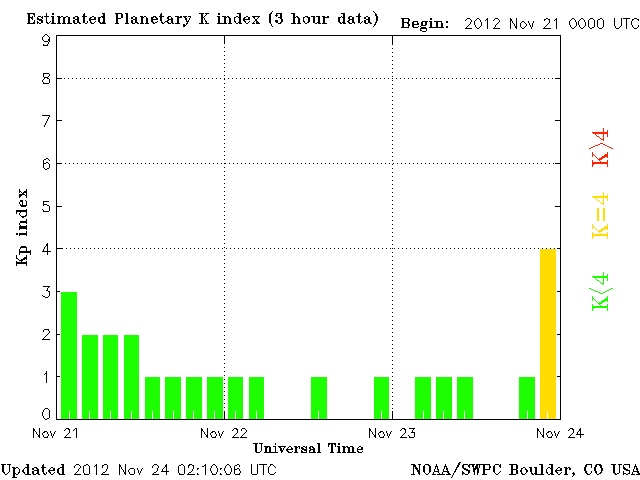 This is the 12z GFS model forecast for 90 hours away, which is in the early morning of November 27th. We can see our low pressure system currently in southeast Arkansas. Considering the incoming pressure of a massive ridge in the Plains, the GFS has this system move off to the east and eventually up the coast. I will discuss more on why and how those two things happen later on. The 850mb temperatures, which are shown as the colors on this image, are pretty warm across the board and would likely only support snowfall in New England if this situation verified.

This is the Canadian's GEM model forecast for 90 hours out, meaning that the GFS and GEM models are forecasting at the same timeframe of November 27th in the early morning. The GEM has this system slightly stronger and faster than the GFS, and also settles the incoming high pressure system further south, hence the quicker pace. However, 850mb temperatures are slightly cooler in the GEM forecast than the GFS. The GEM had been predicting this storm shooting into the Midwest, but this forecast does not allow such a scenario to happen, as the ridge originally predicted to be in the Southeast is now well offshore.

This is the United Kingdom's UKMET model forecast for 96 hours out, meaning that this is the forecast for the morning of November 27th, 6 hours later than the GFS/GEM. The UKMET prefers the placement of the high pressure system in the Plains to be further north than the GEM and more in line with the GFS, however, the GEM's 850mb temperatures appear to be reciprocated in this forecast. The UKMET does not have this system go directly up the coast, which is plausible as I will explain just below.

This is the chart of the NAO from the Climate Prediction Center (CPC) showing the past NAO observations from late summer to now in black, as well as the ensemble forecasts of the North Atlantic Oscillation in red. The CPC's ensembles are predicting the NAO to plummet just around the time that this storm system comes around, but it will be somewhat neutral/slightly negative before the storm system arrives. Considering there is a 4 day lag between when the NAO changes phases and when the effects of the new NAO phase arrive, it is possible that the effects of a neutral/slightly negative NAO could be present as the storm rolls around rather than a strong negative NAO.

In a negative NAO, cold and snow is encouraged to hit the East US, but the placement of where the negative NAO is key. There is an east-based and west-based phase of the NAO. In a west based NAO, the most prevalent sign of a certain NAO phase is to the west of Greenland. For example, if there were a west-based negative NAO, the ridge that produces the negative NAO would be to the west of Greenland. In an east-based NAO, the ridge would then be to the east of Greenland. The NAO will likely be in the east-based phase when this storm rolls around, meaning that the Midwest would be favored for cold and snow rather than the Northeast, hence why I was promoting a north track more than this new south track consensus.

There is also something worth looking at called the Pacific-North American index, or PNA. In a positive PNA, you see storms hitting the Midwest and Ohio Valley and most of the East US, whereas a negative PNA favors the storm track further into the west, near the North Plains. The ensemble forecasts for the PNA have the index to be negative through the time that the storm rolls around, which would not favor a Midwest track. This is why there is that wiggle room for that north track to go bad, and it looks like this, combined with a negative NAO has persuaded the models to have the storm start inland (east-based negative NAO sign) but eventually move offshore and give precipitation to New England (general negative NAO sign). 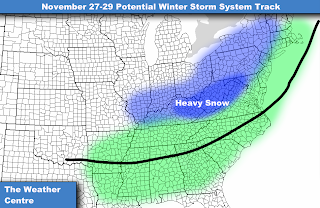 Based on recent model trends and teleconnection forecasts, I expect rain all along the Gulf Coast, Southeast and southern Ohio Valley before the system goes out into the Atlantic Ocean. Snow will likely fall in the southern Midwest, Ohio Valley and Northeast, with heavy snow hitting West Virginia. Rain will fall across the immediate coastline in New England, with possibly heavy snow inland.

Andrew
By Andrew at 2:44 PM No comments:

It appears that a cold and stormy start to December is unfolding. Let's take a look. 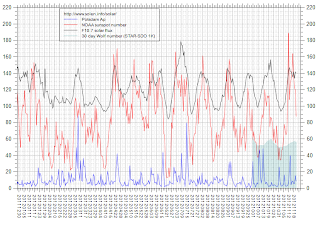 This image depicts the 30 day sunspot cycle. This is not the big solar cycle that lasts several years between each cycle, but a smaller cycle that has a wavelength spanning a good 30 days. As you can see in the image above, we are currently near the maximum of this 30 day sunspot cycle. The sunspot numbers actually had a very high spike not that long ago, but now appear to be going down towards the minimum.

The reason why this is important is because there appears to be a negative correlation (one factor goes up, the other goes down) between the 30 day sunspot cycle and the Pacific North American (PNA) index. For instance, the 30 day sunspot cycle is around its maximum, and the PNA just so happens to be pretty darn negative. This is a negative correlation. In coming days, the sunspots will decrease while the CPC ensemble members begin to bring the PNA towards positive values, as seen in the image below.

For those who don't know what the positive PNA does, it directs the storm track more inland towards the Midwest and Ohio Valley. An example of this is shown as the Chicago Blizzard of 2011 occurred during a positive PNA. So, as we begin to see the sunspot numbers decrease, the PNA is likely to increase. The extent of this increase is unknown, but the likelihood for a pull towards positive territory is likely. Additionally, as the sunspot numbers go down, so will temperatures. The sun is a heating source for our planet. When sunspots are high, it means the sun's energy is high, and the Earth gets a little warmer. In a similar fashion, when the sun has little sunspots, the sun is less energetic, and less heat is released to the Earth.

In conclusion, we can expect an incoming slightly cooler pattern as the sunspot numbers drop gradually. Due to the negative correlation between sunspots and the PNA, the PNA will make a good attempt (and possibly succeed) at going towards positive territory.

What I should also mention is that the tendency for a negative NAO will continue, and thus the chances for Northeast storms will continue.

It is 'Splitsville for the Stratosphere', as the 10 day forecast from the European ECMWF model shows the polar vortex splitting up.

I have circled the two areas of the polar vortex that have been split up. While this may seem like a whole lot of nothing, when the polar vortex is displaced, it can wobble south into the northern hemisphere continents and bring absolutely frigid air to people as far south as the Lower 48. However, because this is the maximum forecast timeframe of the ECMWF, this is as much as we can see. Nonetheless, keep an eye out for a negative Arctic Oscillation (and hence a cold air trend) in the next 10+ days, as the ensembles are already showing below.

Andrew
By Andrew at 9:27 AM No comments: