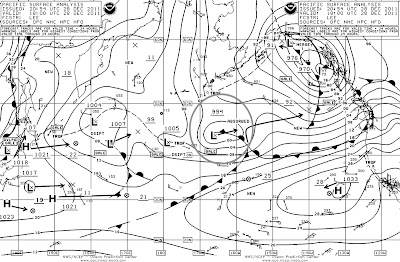 We've got our eye on the storm system that may go into the Northeast, the Midwest, or just move along the US/Canada border. That same storm is outlined in a gray circle above. We will be seeing it move northeast as a ridge offshore the West Coast will pump up the storm northward. This storm should push the disturbance currently on Canada's coast eastward, so both systems can go on land. Because it looks like this system is going into Canada, I'm close to ruling out a Midwest storm solution. The ECMWF/GFS models are probably right with keeping the system in Canada and not going into the Midwest or even the Northeast.
By Andrew at 7:11 PM 20 comments:

Well, the 0z ECMWF was a major disappointment. It kept the system in Canada all together, pretty much leaving the US out of the big snows that were initially possible. But for this update, we are going to say that there is a storm that might affect the Northeast- and why it might trend west instead.

The ensemble forecasts for the NAO are showing a general downturn from the positive phase towards a more neutral phase after New Years. Some ensembles are even going as far to say that the NAO will turn negative. If this were to happen, the chances of an East Coast snowstorm, in my mind, would greatly increase. However, that's a bit too far out to make a definitive prediction on. But what does all this positive NAO (+NAO) and negative NAO (-NAO) mean? 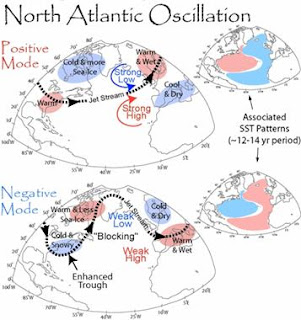 During a +NAO, a low pressure of sorts is over Greenland, which in turn moves the jet stream more north and gives the East Coast some warmer weather. In a negative phase, it is basically the opposite- we see a high pressure over Greenland give the Northeast cold and snowy weather, which is shown as an enhanced trough.
Putting those together indicates that there would be at least some potential for an East Coast snowstorm if the ensembles go as planned and the NAO moves for neutral of even negative territory.

The NAO isn't the only thing that has effects on the US. There is also the MJO. Right now, we're sitting in a moderate Phase 5 stage. We are forecasted to move into a weakening Phase 6, an almost nonexistent Phase 7 and right into the Circle of Death- when the MJO switches phases by moving in a circle in a repetitive pattern, seen by the jagged red circle in Phases 4 and 5. That is what has already happened. As we move into Phases 5, 6, 7, it comes to mind what the effects of each stage are.
The stronger the Phase indicates the more these precipitation anomalies will show themselves. We are going into at least a moderate Phase 6, so let's take a look. Phase 6 includes a wet precipitation anomaly over the Ohio Valley, Southern Plains and Great Lakes, while leaving the East Coast dry. In fact, Phases 6 and 7 (the phases in which the storm will happen) both are discouraging for precipitation in the Northeast. That would provide a sort of building ground that the storm, if it is to come into the US, would affect the Midwest more than the Northeast. However, as a knowledgable weather enthusiast has said, it is a 'marriage of sorts' with the teleconnections. That means, some indices can be favorable for a storm while some are not, and the ones that are not prevail in the end.

For those wondering, the PNA is going to be moving into a very weak positive phase during this storm, per the CPC Ensembles, so I would say it might not be a factor.

As of right now, I am in a wait and see mode, as the models are having trouble with this. I am closely watching the MJO, NAO, among other indices to see if I can find some hints that this storm may or may not happen.
By Andrew at 12:00 PM 19 comments:

An update on the potential East Coast Snowstorm- and why it may shift west- will be out at 12:00 PM CST Today! Be there!
By Andrew at 9:34 AM 3 comments: