Severe Weather: When's it Coming Back?

The atmospheric pattern has been pretty bad as of late, but there's a few things looking up for a rebound by mid to late May.

Just a couple of days ago, a sizable closed low sat itself down in the southern Plains and confirmed what has been a week of waiting and watching to see if this atrocious pattern would actually come to fruition, as models had been saying. Unfortunately for us, the models were spot-on with the development of this closed low, and its presence has declared the beginning of May essentially a dead zone for severe weather. The image above, taken from Saturday, shows the Northern Hemisphere pattern with the closed low in the Southern Plains and massive ridging of high pressure across Canada and into the Northeast Pacific. This ridging created a Pacific pattern that was just oppressive to getting any storm systems into the United States. At this point in time, there is a storm system sliding into the Southwest that could make for a little activity in days to come; I don't see any major opportunities for that storm system, however. 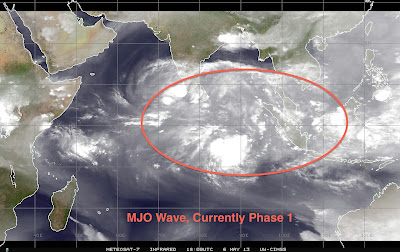 The key to getting out of this bad pattern is what's called the Madden-Julian Oscillation, MJO for short. The MJO has eight phases, each of them centering tropical convection at different locations along the Equatorial Pacific. The above image shows infrared imagery over the Indian Ocean, and we can see the outlined area of enhanced tropical convection stretching from Southern Indian into the waters to the south of South Asia. The location of this convection tells me the Madden Julian Oscillation is most likely in Phase 1, shifting into Phase 2. Typical effects of MJO Phases 1 and 2 on the United States in May include a rather wet pattern over portions of the Plains and Midwest, with below normal temperature anomalies spread across the Central and Eastern United States.

Model guidance sees this MJO wave along the Phase 1 and Phase 2 borderline, with the latest forecast having the MJO extend through Phase 2 before plowing through Phases 3 and 4. Guidance begins to diverge by the time Phase 5 rolls around, but it is Phase 4 we will be looking at for the first opportunity for a severe weather event in some time. The American model suite is looking pretty confident when approached with the idea of a moderately-strong Phase 4 MJO wave. Because there are eight phases, each one is different from the other.

The 500 millibar atmospheric pattern for Phase 4 in the month of May is shown above, provided courtesy of Americanwx. In the typical Phase 4 pattern, we see a low pressure pattern in the waters off the West Coast into the Southwest US. The troughing pattern in these areas indicates the idea of multiple storm systems. If storm systems were to take this route through the Southwest, it would be expected that the severe threat would shift to the Southern Plains. High pressure over portions of the Arctic could open the door for a larger presence of cold air in Canada, which could then aid in the strength of a cold front. However, I am skeptical of the idea- to assume that ridging over the Arctic will automatically provide more cold weather is a dangerous assumption to make, and one I'm not willing to elaborate on.

The thing that is probably the more hopeful indication (outside of the progressively strengthening MJO) for severe weather prospects is the Climate Prediction Center's analog dates for the 8-14 day forecast period. The Climate Prediction Center will take the projected atmospheric flow for the 8-14 day timeframe, find dates with a similar set-up to the forecasted one, and list them on the image above. If you look closely, you can see that the first date of interest is May 2nd, 2009. Of course, 2009 was a year with an unusually active tornado season, and one that many storm chasers would give a lot for. I wouldn't put too much stock into the premise of 2009 being the top analog- many a time I have seen favorable analog dates turn out to be duds. What you should take from this all is that an improvement is on the way. Time will tell if this improvement is small or significant, but it will certainly be better than this absurd closed low in the Plains for days on end.

Some info provided by: Stormgasm.com, AmericanWx
By Andrew at 8:49 PM No comments: Links to this post

The threat for an arctic outbreak of cold air still looms, although forecasts have backed off on its intensity. While intensity is down, the consensus of a cold air shot has risen. 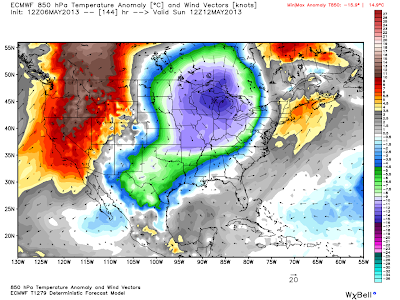 This is the temperature anomaly forecast from the ECMWF model for 5,000 feet off the ground, with wind vectors superimposed on the anomalies. For this image (valid for the morning of May 12th), we see a large swath of cold air exiting Canada and making its way down through the Great Lakes, plowing into the Eastern US after affecting everyone from central Canada down to Mexico. Wind vectors indicate the deepest cold pocket will be shifting southeast from Michigan/Wisconsin, likely moving towards the eastern Great Lakes in the few days following May 12th. Analysis of temperature forecasts from the European model suggest the northern Plains would easily drop below freezing temperatures, while cities like Chicago, Detroit, Des Moines and Milwaukee may be looking at upper 30s. 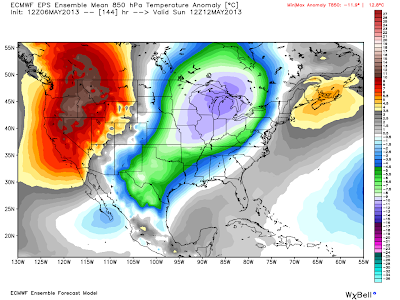 The prestigious ECMWF ensemble set, known as the ECMWF EPS (we'll call it the EPS for short), also sees the evolution of this cold wave. In strikingly similar location, the EPS has the coldest of the cold skirting the Midwest and plunging into the heart of the western Great Lakes. At the same time, abundant cool air flows down into the southern Plains and shifts east to allow for a major cool-down across the Eastern Seaboard. Not all that different from the European model alone, the combination of these two forecasts proves to be one that will be hard to beat.

I posted the other day on how the idea of an arctic shot of cold air was having trouble with the models, and that the chance it happens at that intensity was slim. As expected, models have dialed down the intensity of the cold wave, but model uncertainty has been drastically reduced. We could be looking at a nationwide heavy rain event (I hesitate to say severe weather event, because the pattern has been so poor as of late) if current model forecasts go as planned.

Andrew
By Andrew at 8:49 PM 4 comments: Links to this post