I am watching the timeframe of mid to late February for some wintry weather across parts of the nation.

The reason I post about this long range potential is because of a repeating pattern called the Lezak Recurring Cycle. Every fall, this pattern sets up and repeats itself every 40-60 days. That cycle length varies from year to year. This year's length is 53 days. If we go back from February 18-19, we find ourselves at the very last days of December. Looking at the 500mb map for December 29 (top image), we see a couple bumps in the contour lines, displaying low pressure systems. This could indeed produce some wintry weather within the Midwest and Great Lakes. A day later, on December 30th (bottom image), we see that the storm has shot offshore and is now impacting the Northeast.

This storm will depend on the atmospheric pattern that is in place when the system comes through. Looking at some very long range indicators, I see that this storm would indeed favor the Midwest and Ohio Valley for wintry weather. However, a lack of high pressure over Greenland could make for a more inland track that may promote more wintry weather for the Upper Midwest rather than the lower Midwest, but that is all TBD.

If you're not into repeating patterns, this post is not for you. If you want snow, read on.

I am watching closely for the potential of a winter storm from the 14th of February to the 16th; these dates are very fluid.

The reason I post about this long range potential is because of a repeating pattern called the Lezak Recurring Cycle. Every fall, this pattern sets up and repeats itself every 40-60 days. That cycle length varies from year to year. This year's length if 53 days. If we go back from February 14-16, we arrive around the December 25-26 timeframe. If we take a look at the 500mb chart from December 26th (pictured above), we can see a storm system impacting the southern Midwest, spreading precipitation throughout the region. The Midwest and Ohio Valley would be impacted by this storm if it follows the same track as the December 25 storm did. Looking ahead to the last days of December, this storm then progressed to the Northeast. Could we see that region impacted by this system? That's not clear right now. The reason is that February may not feature as much high latitude blocking as previously thought. If this blocking does not appear near Greenland, the atmospheric pattern would not be favorable for coastal storms, and then this storm track may take a more inland pattern.

But again, this is based off the LRC pattern and does have bust (failure) potential. I post about it because this pattern has fared well this winter, and should perform well as the winter progresses.

Andrew
By Andrew at 5:05 PM No comments: 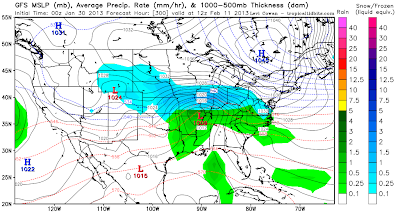 There is increasing potential for a winter storm occurring between the 8th and 12th of February.

The GFS model has been continuously hinting at a storm system ejecting from the Plains around the 9th of February and moving east. As it does so, the storm rides along the freezing line, which is shown above in the southernmost dashed blue line. As the GFS model forecasts above, the storm produces abundant snow across the Plains, Midwest and Ohio Valley. Previous forecasts have shown accumulating snow to occur in these areas, although exact amounts are to be determined.

The reason I post about this long range potential is because of a repeating pattern called the Lezak Recurring Cycle. Every fall, this pattern sets up and repeats itself every 40-60 days. That cycle length varies from year to year. This year's length if 53 days. If we go back 53 to 54 days from February 11th or so, we find ourselves with a very similar piece of energy in the Plains. No doubt that the LRC is indeed behind this, and its support is a big part of why I am posting about it. I find that there could be low pressure along the West Coast, something that could push this storm more towards the Plains, once again shafting the lower Great Lakes in favor of the Upper Midwest. However, if the storm adheres to the LRC pattern, cities like snow-starved Chicago could see some snowfall out of this, but again, the specifics are TBD.