Analysis of October Snow Cover and its Impacts on This Winter

There has been an emerging idea that the amount of change of Eurasian snow cover below 60N in October can give excellent clues on the prediction of the Arctic Oscillation for the following winter. Judah Cohen, who made the Snow Advance Index (or the SAI), says that if snow cover ends up higher at the end of October than at the beginning of the month, the chances of a negative Arctic Oscillation greatly rise. On the other hand, a negative change anomaly from October 1 to November 1 then influences the potential for a positive Arctic Oscillation, and thus warmer weather for the US in winter.

Now that October has passed, let's take a look at the graph of October snow cover for the 35N-55N latitude region. 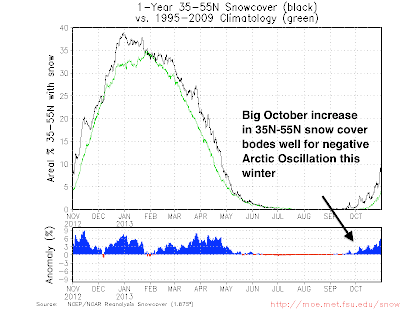 Taking a look at this graph, we see a definitive above normal snow cover trend for the month of October. The graph suggests snow cover began around normal, and ended well above normal. This tells me that the Arctic Oscillation may very well be negative this winter, as Cohen's SAI would deduce.

I'm not fully sold on the idea of a sustained negative Arctic Oscillation for this winter. For one, the Quasi-Biennial Oscillation (a wind-related oscillation that affects the stratospheric and tropospheric weather patterns, particularly in the Arctic) is in a weakening positive state. The positive QBO state means that the polar vortex is more likely to be seen as stronger in the winter, and a stronger polar vortex fits the definition of a positive Arctic Oscillation. If you've seen my Final 2013-2014 Winter Forecast, you also know that Michael Ventrice was able to fit the QBO into eight phases, each of which has different effects on the northern hemisphere. We are currently entering Phase 6 of the QBO, which enhances the strength of the polar vortex, per the QBO phase composite included in that forecast. A ridging pattern in the Southeast also appears possible based on this QBO composite, but the point is that the negative AO that may be induced by this snow cover anomaly may need some time to deal with the unfavorable QBO. I expect we see some down right cold weather in the end half of winter, and this could very well be when the AO is at its lowest points.