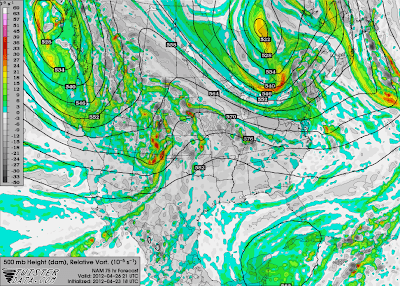 I am monitoring the potential for some hazardous or potentially severe weather in the Plains come Thursday. Looking at the image above, there is a vorticity maximum in northeastern New Mexico, suggesting the presence of a low pressure system. It looks like it will be negatively tilted, with the highest vorticity values pointing towards the southeast. This negative tilt will add to much needed instability if storms want to develop.
A lack of jet stream support and stronger vorticity values is leading me to assume that this will not be a big event. I am not seeing sufficient jet stream winds to indicate that this storm will be strong enough to cause a more large-scale event, and that this may be a slightly more localized event. 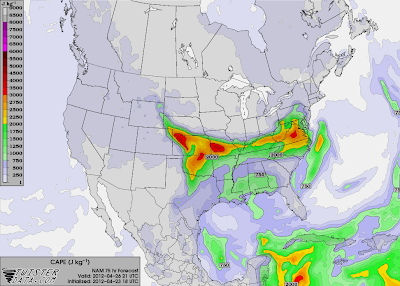 Instability values will be pretty impressive with CAPE values exceeding 3000 j/kg in Kansas and Missouri, as well as parts of Oklahoma. Again, this storm system is not looking too strong, so maximum instability is going to be around what is shown here. Considering the system is in northeastern New Mexico, the system should move in a general east-northeast direction, giving the Oklahoma/Kansas areas the first shots at severe weather potential. 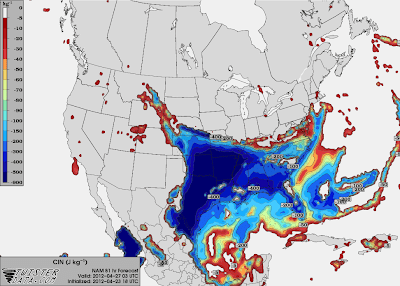 Here is the reason storms may struggle to form. A huge storm-suppressing cap of warm air will be over the darkest shades of blue, meaning that a lot of instability will be needed to break this. As of now, it looks like a good 3000 j/kg of CAPE will be necessary to break the cap and then produce severe storms. This is about the maximum instability being offered by the so-so storm system.

When it comes down to it, the instability will probably cancel out the cap and ignite some storms. The question is, will these storms be severe, and could they be tornadic? I would not go as far as to forecast that, but using these indications, I would say that some severe storms are possible, but lack of major shearing is discouraging for tornado potential.

Andrew
By Andrew at 4:32 PM 3 comments: Links to this post