A trifecta of weather extremes will bombard the United States beginning tomorrow, and continuing on through the weekend. 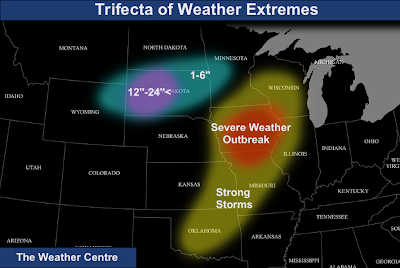 Model guidance has finally come into agreement that a blizzard will develop out of an anomalously strong storm system in the Plains, delivering amounts exceeding the two foot mark. I outlined a 1-6 inch forecast across portions of the Dakotas and Minnesota, with such a large difference in amounts due to how sharp the cutoff may be with this snow event. South Dakota will get slammed the hardest, with 12'' to 24'' amounts possible. Latest model guidance suggests isolated pockets of 30'' totals are possible, but to anticipate any model exaggeration bias, I held down totals to the 12-24'' mark, with higher amounts in the realm of possibility. I'm not sold on anything higher than the 24'' mark due to this possible snowy model bias.

Those in South Dakota (and portions of North Dakota that may get in on these high totals) should prepare for widespread power outages, in large part due to trees that may not have lost all of their leaves yet. Snowfall will build up on trees and leaves, which can easily lead to partial or total destruction of many large tree branches, which can then cause power lines to collapse. This is expected to be a significant weather event, and anyone in line for these significant snows should be aware of the potential of this major storm system.

On the warm side of this major storm system, a severe weather outbreak is expected. Severe thunderstorms are anticipated to fire from Oklahoma to Wisconsin, but supercellular, tornado-producing thunderstorms find the largest potential of formation in Iowa and southern Minnesota. High resolution model data paints a very intense severe weather event, though such forecasts cannot be taken at face value. That said, I do expect a substantial severe weather event tomorrow, on October 4th.

Those in Iowa and southern Minnesota should prepare for the possibility of damaging and life-threatening thunderstorms tomorrow. Any storms that manage to become supercellular will have the ability to produce tornadoes in this environment. With a strong storm system producing what ought to be a tight temperature gradient across the Plains and Midwest, storms should not have too rough of a time forming.

Tropical Storm Karen formed earlier today in the Gulf of Mexico, and is expected to eventually make landfall on the Gulf Coast sometime Saturday. Tropical storm conditions are anticipated across a narrow band of land where Karen hits, and the rainfall amounts could reach the 10'' mark. At this time, it does not look like TS Karen is a significant threat to life and property, but with any tropical cyclone, high winds, heavy rainfall, and the threat of tornadoes does mean anyone in the potential landfall zone should keep a close eye on Karen. Model guidance is not perfect, and the cyclone's track could change.

Andrew
By Andrew at 4:32 PM 4 comments: Links to this post