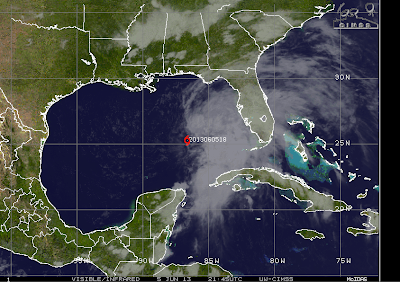 As we hinted at on May 28th, satellite imagery and aircraft reconnaissance  confirms the formation of Tropical Storm Andrea at this hour, allowing the Atlantic tropical season to get off to a fast start. Satellite imagery depicts a strong eastern flank of Andrea but a very quiet western side to this tropical storm. Considering the conditions in the Gulf of Mexico aren't totally primed for tropical formation, the rather unusual build of this cyclone isn't that extraordinary. Satellite imagery also indicates clouds from Andrea have already overspread Florida, and it is in Florida where I expect the primary landfall to occur.

Atmospheric steering winds for this afternoon over the Atlantic basin are shown to be trying to push Andrea due north into Alabama, and the official National Hurricane Center track predicts the tropical storm to move slightly north in coming hours. However, going into the next few days, it is anticipated that these steering winds will begin to gain a more eastward component, allowing Andrea to maintain less of a northward track and more of an eastward track, combining to make for a northeast movement.

I believe the potential landfall zone will extend from the immediate vicinity of Cross City to Sarasota, Florida. This zone is where the models are converging for a landfall. The yellow star indicates where I believe the cyclone will make landfall. This landfall spot would be right around Hudson and New Port Richey. It is expected almost everyone in this potential landfall zone could experience tropical storm force winds and potentially flooding rains. Preparation plans are advised to be activated as the first named system of 2013 becomes the first landfalling system of 2013.

Andrew
By Andrew at 6:07 PM No comments: 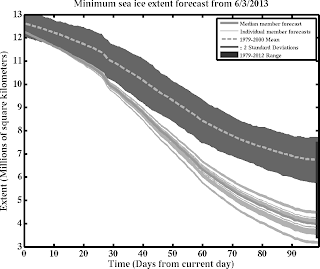 The image above, from Steven Cavallo, shows the latest ensemble forecast of sea ice over the Arctic as far as 100 days out. We see a plot of the average sea ice values over the next 100 days, and the ensemble prediction superimposed on it. The ensembles take the sea ice values at below normal levels in the next month before really dropping off after the 30 day mark. From the beginning of June onwards, it is predicted that the Arctic will have sea ice levels less than half the typical values for that time of year.

In the very long range, this could impact the winter by not being able to hold as much sea ice, and thus allowing the Arctic Circle to be warmer than normal. This could then allow the polar vortex to weaken, which in turn may move to the lower latitudes at points during the winter. Bear in mind a LOT needs to happen before we can get that sequence underway, but this is a good first step for those wanting to see the polar vortex weaken into winter.

Andrew
By Andrew at 2:32 PM No comments: