This is for each day of forecasts released.
By Andrew at 1:30 PM No comments:

Christmas Snowstorm Discussion (12/20)- Battle of the Models and Indices

We have quite a predicament here with this Christmas storm. We have the ECMWF and LRC going up against, among other things, the NAO and the GFS. (To clarify, the ECMWF and GFS are models, the NAO is an index that is monitored in the Atlantic Ocean. The LRC is a reoccurring pattern each winter and spring, which repeats every 45-50 days this winter.)

The ECMWF is putting out forecasts of a big snowstorm to hit the Northeast just after christmas, which would indeed crush travel and bring places to standstills. It is projecting widespread amounts of over 6 inches in the Northeast. And it may hold some truth to it. You see, a system associated with the LRC repeated in the early days of November. What has come to be seen is that the LRC has repeated again with the storm system that is producing a blizzard over the Southwest today and yesterday. Afer comparison, it appears that this new system currently in the Southwest (not associated with the blizzard) may be the ultimate Christmas Day storm maker or breaker. Here's the storm right now.

The storm is right on the Four Corners (Utah, Arizona, New Mexico, Colorado) as of this morning. We can see the blizzard is in Oklahoma. Now, if the LRC proves its point, we may be seeing this storm move into the Midwest very strong and possibly put down some precipitation. However, if the system takes a more southeasterly direction, it would indeed match up with the ECMWF solution of a snowstorm for the Northeast. It is very well possible that the system could go southeast- 45 days ago, we saw a similar situation as today, but with a strong ridge present for both storms (blizzard and 4 corners storms) when the moved eastward. Today, we are not seeing that very strong ridge for the blizzard storm, so it is possible that a big ridge will not build up for the 4 corners storm, and that storm will instead go more southerly into the Northeast.

The GFS is predicting that the storm will eject north-northeast out of the Southwest and then suddenly move eastward offshore into the Atlantic Ocean on Christmas Day, thus leading to no Northeast snowstorm. The idea of this is supported by the NAO. The NAO, in its positive phase, brings calmer and warmer conditions to the east US while all the cold is held up in the northern reaches of Canada. The NAO is forecasted to be positive during that timeframe, as seen in this GFS Ensemble 6z NAO image from Policlimate. 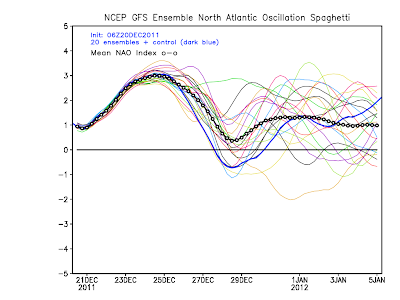 The NAO is forecasted to be positive during the supposed storm (Dec. 26) before dipping negative a couple days before New Years Day. When the NAO dips negative, all the cold air comes flowing southward from Canada into the US. However, if it is only negative for a short period of time, nothing may actually happen due to the too-short time that it was negative. As we have heard a well-known meteorologist say, he has only seen big snows happen for the Northeast when the NAO was negative.

What Do We Prefer?


The ECMWF is a very good model, but it can't win all its battles, so to say. The GFS and NAO may come out in the end, but the ECMWF and LRC team are also holding a good contest. I am not going to give my input, as this looks like a wait-and-see situation for now.
By Andrew at 11:05 AM 6 comments: