Long-Range Forecast (Out to 3 Months)


The next 6-10 days will feature cooler conditions across the Southeast US, where chances of below normal temperatures rise above 60%, investing quite a bit of confidence in this forecast. This cool down will also affect the Midwest, Great Lakes, and Ohio Valley regions. Areas in the South hit hard by the drought will get some relief from this cool down. However, the West Coast will see much above normal temperatures, with areas like Seattle andLos Angeles in this warmer area.
When looking at precipitation anomalies, we see still below normal temperatures likely across the south-central US northward through the Plains. A small area including much of Colorado will be under the chance for above normal precipitation. A similar above normal precipitation region will extend from the Northeast into the Great Lakes regions.
8-14 DAYS OUTLOOK
The next 8-14 day period will feature the cool down in the East US retreating to include Florida in the worst area of cooler temperatures, while the Great Lakes and Plains will ease out of this harsh cold spell, mainly affecting the South. Cooler temperatures will still exist from the Northeast into the Ohio Valley and along the Eastern Seaboard, but with not as intense effects. The warm air mass stationed out west will slowly glide eastward, helping to diminish the colder temperatures.
The Precipitation Outlook includes a huge portion of the country under a below normal precipitation spell for this 8-14 day period. While the Northeast and Northwest will be under some potentially above normal precipitation, it will be a heavy majority of the country that may see more sun than rain.
1 MONTH OUTLOOK
Temperatures will not be as extreme as we saw in the 6-10 day outlooks and the 8-14 day outlooks, but this one month outlook will still include a warmer than normal air mass prevailing over the Plains and Midwest into the Southwest. Florida will have its own little area of below normal precipitation, while the East Coast will end up in a moderated month of temperatures.
The Southern half of the country will be the main areas under a precipitation deficit according to this one month outlook. It is not too surprising, as we enter a La Nina and the trademark precipitation deficit returns for the South. Notice the area in the Ohio Valley with an 'EC' in it. While the 'EC' doesn't matter (it means equal chances for above/below normal precip), notice how the area of EC is set up- it is set up in a way that promotes more precipitation in the Ohio Valley than other areas- another sign of a La Nina.
3 MONTH OUTLOOK

For the 3 month period, let's take a look at precipitation first. Once again, as in the one month outlook, we see the 'EC' present again in the Ohio Valley, but this time with more of a penetrating effect of more precipitation than other areas placed more southerly than usual. It could mean some drought relief for this winter, but let's not get into something like that just yet. We remain a far ways off. Anyways, The South will begin to slip back into a rut of very below normal precipitation anomalies throughout this 3 month period, while the Northern Plains into the Northwest will be in a above average precipitation area.
Temperature wise, the above average temperature will be present in the South Central Plains, extending northwestward into far eastern portions of the Southwest. This isn't horribly surprising- we saw it coming several months ago, but not with confidence. Notice the cooler temperatures at the tip of Florida. It isn't too significant but may end up being something to watch. Also, a small portion of the North Plains is forecast to be under a cooler than normal 3 month average.
By Andrew at 3:52 PM No comments: 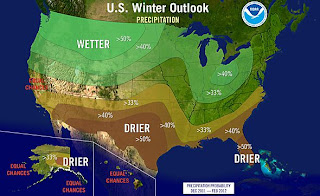 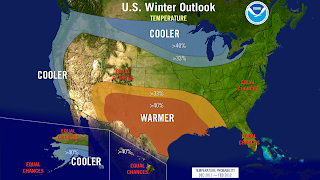 Long-Range Forecast (Next 3 Months) To be Released this Afternoon

A long-range forecast for the US will be released this afternoon that will go out to three months.
Keep in mind this is not the release of the final 2011-2012 Winter Forecast, which will be released November 5th.
We will also try to release a La Nina update if the site we use will update today.
By Andrew at 7:32 AM No comments: