There is rising potential for a winter storm to strike anywhere from the Plains to the Northeast. We'll start off with today's 12z ECMWF model, forecast for the morning of December 15th. Here, we see a good low pressure system on the Illinois/Iowa/Missouri border. It's central pressure above 1000mb tells me that this is not a particularly strong system. Despite this, very cold air based in east Canada is funneling into the Plains in the wake of this system. Such a solution would portray a likelihood of snow in the area, but again, we're a while out.

Moving ahead to the morning of December 16th, we now see our system has moved offshore and is entertaining residents of New England. We now see our cold air still coming down from Canada, but now has moved into the Ohio Valley. I would not be surprised to see some lake effect snow in the Great Lakes if such a solution verified. The continued abundance of very cold air in southeast Canada says that snow is even more likely for the Northeast if the ECMWF forecast were to verify.

As for the GFS, this is the forecast for the evening of December 15th. We see a much stronger storm system in the Ohio Valley, with a very wide precipitation area giving snow to the Midwest and Ohio Valley, with a very very wet Mid Atlantic/New England area. Again, cold air coming south from Canada could bring up the lake effect snow (LES) possibility.

This is the GFS forecast for the morning of December 16th. Here, we see the system has strengthened even more as it moves into New England and feeds off the energy in the Atlantic Ocean. We now see very heavy rain in the Atlantic and towards Nova Scotia, with heavy snow ongoing in the eastern Great Lakes and parts of the Northeast.

Models are hinting at the potential for a system to impact the East US during this timeframe, but as for if this will even happen, no one knows yet. This will certainly be interesting to see how it plays out.

Who Could See A White Christmas?

***This post is dedicated to the Americans who lost their lives in the Attack on Pearl Harbor, including military personnel at the base, first responders, and other assistance crews.***


We are now in the first month of winter, and as the Christmas decorations go up, we begin to wonder: 'Will I have a white Christmas?' While no one can accurately predict such a possibility 18 days away, I can pick out some clues that may tell us who has a chance at having snow on the ground come Christmas Day.

This is the European's weather forecast model, called the ECMWF. It's not the actual model, but it is that model's ensembles; essentially the ECMWF model forecast with its parameters slightly adjusted in each different member (ensembles include several of these forecasts, known as members). The ECMWF Ensemble (ECMWF EPS) forecast for December 17th is depicted above, with cooler colors showing where a stormier and cooler pattern may be found, and warm colors denoting where a quieter and warmer scenario is likely to unfold. There are a few things we need to look at in this image.

Second, check out that ridge of high pressure we previously observed in North Europe. That weakens something we call the polar vortex. The polar vortex (PV) is a low pressure system that sits over the Arctic, with varying strengths. When the PV is weaker than normal (like when high pressure enters the region), we tend to see the Arctic Oscillation (directly related to the PV, also called the AO) go negative. Because of the warming way above the surface, the cold air is forced south and sent to the United States. In a positive AO, the polar vortex is stronger than normal, and the cold air is locked up in the Arctic, and warm air prevails in the US. What we are seeing above appears to be a negative AO. Keep that forecast in mind for this next 2 paragraphs.

The third, and most important thing we need to define is a third index called the Pacific-North American index, or the PNA index (sometimes just the PNA). The PNA covers, as the name implies, the northeastern Pacific Ocean and the western part of North America. When we see a stormy pattern in these regions, we call the PNA negative. In response to such a stormy pattern in the west, it's only natural for a high pressure system to want to form in the East US. In a positive PNA, high pressure prevails in the West US, and storms tend to fill the East US. The ECMWF EPS forecast above favors a negative PNA.

This is the American's weather forecast model GFS, but its ensembles are depicted in the image above. It's the same deal that I described in the ECMWF Ensembles- the ensembles are composed of several GFS forecasts, but each forecast has one or more parameters changed to account for many scenarios. This GFS Ensemble (GFS ENS) forecast is valid for the morning of December 23rd, pretty close to Christmas.

We can see that our negative AO, negative NAO and negative PNA are still ongoing, and now we see a blue shade covering much of the nation. If we take what we know about the cooler colors and the 500mb height anomaly, we should know that this forecast means the GFS ENS believe that the entire nation should be in a generalized stormy (possibly cool) pattern.

By now, you might be yawning because this is all so boring, but believe me, this has a point.

The storm track for the negative NAO brings storms to the Northeast, while the negative PNA brings storms down to the South near the Gulf Coast and into the North Plains and Upper Midwest. We can take these two storm tracks, and, by using multiple forecasts of the Arctic Oscillation, try to pin down how much cold air will be available for any snow potential.


This is the CFS v2 weekly forecasts, where the model can show projections of temperature anomalies and snow depths for a 5 day timeframe. These forecasts include December 22nd through the 27th, with Christmas falling right in that timeframe. Temperature anomalies are shown on the top image with blues and greens across the board, showing a cooler Christmas may be in the cards. As for snow depth, the four CFS v2 ensemble forecast members show different solutions. Let's break them down. 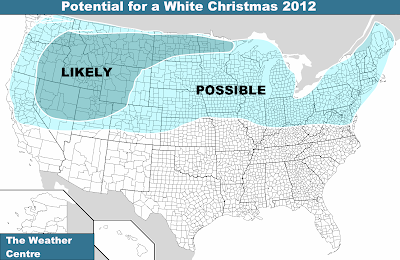 This is a generalized picture of who I believe has the best chance of seeing a white Christmas. Please don't ask if your city will see a white Christmas, because I won't answer- not out of annoyance, but out of a lack of knowledge. Like I said, we're 18 days out.