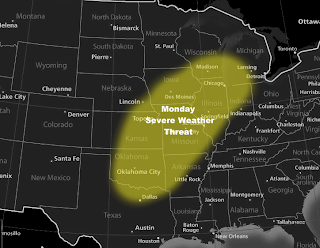 Monday's severe weather threat does not look to be as significant as Sunday, but the uncertainties that currently remain may highlight the dangers that already exist.

Model guidance indicates that after Sunday's big display of severe weather, Monday should hold the severe threat further to the east, although not as intense. It appears that conditions favorable for supercell development will be centered from southern Oklahoma as far north as central Wisconsin, and as far east as the outskirts of Detroit. As of now, the question still remains as to what the main threat will be. It's been back and forth between a tornadic feel and a damaging wind feel for this event, especially in the Midwest, but I'd have to side with the climatologically-favored damaging wind threat. Tornadoes aren't known to be that prevalent east of the Mississippi. However, down south in Oklahoma, the threat stands for all forms of severe weather, which could include extreme hail/damaging winds or even strong tornadoes.

I should know more tomorrow when Sunday's event gets underway, although the details for Monday could very well be unknown until Monday morning when the event is finished. You have to account for things like remnant outflow boundaries that could ignite storms later in the day.

Andrew
By Andrew at 6:09 PM No comments: 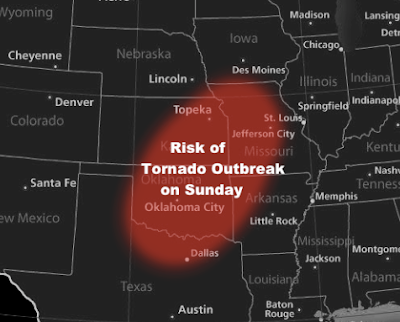 There is a threat for a tornado outbreak episode for Sunday, May 19th.

Decision to call this a significant tornado episode has been in the works for a day or two, although confirmation was only made in the last few hours. Latest analysis of predicted helicity and instability in the nation's heartland tells me that Sunday evening may contain multiple strong tornadoes. It is for this reason that tomorrow is going to be a Critical Storm Action Day (CSAD), which means all resources here at The Weather Centre will be devoted to covering this event.

High resolution models support the idea of scattered rotating supercells developing tomorrow evening in a development that will lead to tornado development. Additional products with a tornado mask indicate that central Oklahoma will have incredible potential for strong, long-lived tornadoes tomorrow. At this point in time, based on predicted reflectivity across the Plains, we should see some spectacular supercells tomorrow evening that are more than likely to produce a very formidable tornado threat in the areas shaded in red in my map above. If you are in the shaded red area above, I highly advise you to be ready to take cover from what could be a strong tornado (EF3 or stronger). However, always heed the words of the National Weather Service over this blog.