The latest sea surface temperature anomalies across the Equatorial Pacific indicate that the El Nino has dropped off and disappeared, temporarily making this El Nino dead.

The reason I say temporarily is because underwater anomalies are still in an El Nino stage. However, these warm waters are not near the surface and are several dozen meters below the surface. As I have been saying for the last week or more, this El Nino is struggling, and this only continues to prove my case that the El Nino is dying off.

I believe that we still are in an El Nino, only because this is the first update that shows no warm SST anomalies. However, if the same scenario is shown next week, the probability of a neutral winter will skyrocket in my eyes.

ENSO monitoring regions are still hovering around positive-neutral temperatures (just below 0.5 degrees above normal), so we know that the El Nino is not completely killed off. However, this is a big step as far as the potential for a neutral winter, possibly hinting at a La Nina into spring or summer.

Weather Watchers: Another Windy Day In The Midwest, South Plains 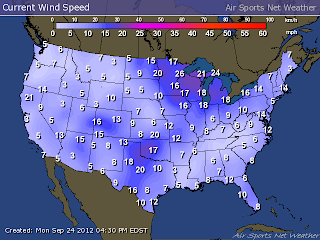 What appears to be a third day of wind has arrived for much of the Midwest, and even a portion of the Southern Plains today.

Wind speeds have been clocked as high as 26 MPH on the northern Minnesota/Wisconsin border this afternoon, while bigger cities like Chicago and Milwaukee only have gotten as high as 18 MPH. Regions closer to the Great Lakes are getting even windier, with the upper portion of Michigan getting as windy as 24 MPH.

Even the Southern Plains are getting in on the fun. Central Oklahoma has maxed out at 17 MPH for the afternoon. However, the northwesterners in Texas can attest to 18 and 20 MPH wind reports, equal to that being observed in the Midwest. The lack of a fairly large body of water brings down the reports in Texas from that of upper Michigan, where water enhances the wind speed, as land does not interrupt the wind.

Andrew
By Andrew at 4:00 PM No comments:

I have been watching the QBO and found that both monitoring levels (30mb and 50mb) have been trending negative. This bodes well for the possibility of a negative NAO this winter.

But first, WHAT IS THE QBO?
QBO (Quasi-Biennial Oscillation): The QBO is an indice measured in two levels of the atmosphere. These two levels are the 30mb and 50mb levels, and are measured by the direction and strength of winds in those levels. For instance, the POSITIVE QBO is found in WESTERLY winds, while the NEGATIVE QBO is composed of EASTERLY winds.

Recent measurements of the QBO at both the 30mb and 50mb levels are negative, indicating easterly winds. The presence of both levels recording negative values tells me this is not a quick change from positive, but a trend.

The QBO has a big impact on the North Atlantic Oscillation. Without getting into the technical stuff, just know that a negative QBO can help enhance the negative phase of the NAO. Let's take a look at what the NAO has been doing recently. 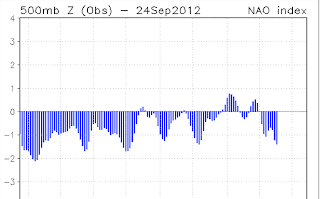 Could the QBO be to blame?
Most certainly! The QBO has been very negative for much of the time the chart above was recording (June 1 to present). But the QBO is not alone. The AMO also helped, the effects of which were seen in this recent post. The presence of a positive AMO has helped to warm the waters in the north Atlantic.

It's like all the pieces are coming together for the Northeast. Will this be the year of winter's revenge? It's certainly shaping up that way.

The presence of a strengthening positive-phase AMO, or Atlantic Multidecadal Oscillation, indicates that the Atlantic is warming up, enhancing prospects for a negative NAO this winter.

The Atlantic Multidecadal Oscillation is an index used for measuring water temperatures in the Atlantic. This AMO can be measured using a sea surface temperature chart like the one above. The chart above is the weekly SST anomaly. You can clearly see the warmer than normal temperatures across waters to the south of Greenland and in the Atlantic Canadian regions.

The NAO, or North Atlantic Oscillation, has a positive and negative state. In the positive, a high pressure forms over a portion of Greenland and blocks the atmospheric flow. This blockage releases cold air south into the US.

The AMO is related to the NAO in how the AMO affects the NAO's stage. Right now, the AMO is positive, providing warm waters to the north Atlantic. However, with these warm waters comes the increased likelihood of a negative NAO. A negative NAO can also be characterized by warm waters in the North Atlantic, and this correlation between the two may help explain the recent streak of negative NAO values.

So, the positive AMO appears to be on the East Coast's good side at the moment. Should this positive AMO continue into the winter, I have no doubt that the probability of a negative phase of the NAO would greatly increase.

It should be noted that last winter, the AMO was mainly neutral, explaining a part of the lack of a negative NAO.

Andrew
By Andrew at 3:39 PM No comments:

Today's Weather Hotspot: Rocky Mountains
A trio of systems will be producing a messy day today, with showers and storms making an organized appearance in the mountains. No significant severe weather is expected, however some small hail and brief heavy downpours are possible.

South Plains
An incoming warm front will produce a windy corridor across the region, particularly from Missouri into Texas. Isolated showers are also possible in the eastern part of the region. No severe weather is expected.

South Florida
Spotty showers and storms will be prevalent across southern Florida, especially later in the day. Brief heavy downpours and small hail are possible. No significant severe weather is expected.

Northeast
Showers are possible across the Northeast, as cool air produces small lake effect showers. Additionally, a system offshore may ignite some moisture in the region.

Andrew
By Andrew at 6:00 AM No comments: