Sorry for the lack of posts on this storm- the models got too confusing during the time period.

The 0z and 12z ECMWF has come back with the storm phasing in this timeframe, as I had expected may happen several days ago when I mentioned how models can revert back to the old track after shifting dramatically.

Here's the 12z ECMWF hour 72. At this point, we are close enough to the timeframe of the storm that this is probably going to happen, unless something dramatically changes (which would be very unexpected).
The ECMWF is showing a large warm sector of air being thrown out ahead of the storm, leading me to assume that this will be a rain to snow event for many just south of the IL/MI/NY border lines.

Since it is close enough, I have decided to bring back the analogues.
The 'best' analogue for this storm was in an El Nino phase, so I ruled that out. The analogue I picked out here has very similar conditions to what is forecast by the GFS. Here is what the 2nd best analogue (March 4th, 1982) had in terms of snowfall. 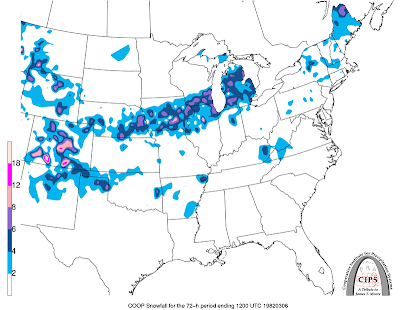 I think these 72 hour amounts are a bit too far south, but do seem reasonable nonetheless. As of now, because I don't have time to make a forecast, I think this is what I will be banking on for right now. It is very much subject to change, as other models do also have a say in this.

Just for kicks, here's what the top analogue (the one I discounted due to the El Nino) showed for snowfall from the February 15, 1992 snowstorm. 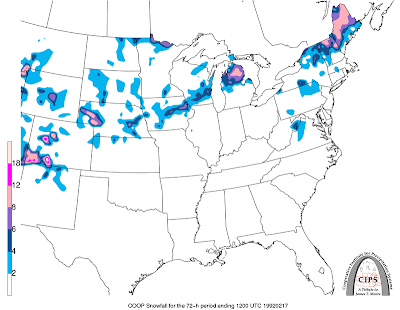 Surface Analysis indicates that much of the country is waking up to a cold morning today, with a strong high pressure system letting the cold air flow across the eastern half of country. The cold air has prompted Hard Freeze Warnings to be issued in Florida, among other cold-related weather bulletins.
There is a weather disturbance now ejecting from the CO/NM border. This system will continue to move eastward, eventually producing snow as it moves along. 2-4 inches of snow are possible in states like Missouri and Iowa, with 1-2 inches likely in Illinois and lower Wisconsin.
There are some scattered fronts and troughs across the Eastern Seaboard but nothing too major going on there.