Tropical Cyclone Generation Likely in Caribbean in A Few Days 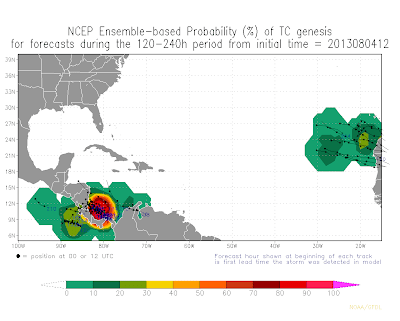 Ensemble forecasts are indicating the chance of tropical cyclone generation in the southern Caribbean is skyrocketing in the next 5-10 days.

The image above shows the probability of a tropical cyclone forming in the timeframe from 5 days' forecast to 10 days from now. As the graphic above shows, there is higher than a 90% probability that we will see tropical cyclone formation in the waters just north of Panama in this timeframe. Based on the tracks listed on the image, it appears any cyclone that does form in the waters immediately near Panama would drift west and cut through Central America before transitioning to the East Pacific basin.

After the medium range development chance, things still look to be trying to get going. It appears tropical waves coming off of Africa may try to make another shot at development, but we're still a good 2 weeks+ away from that potential.