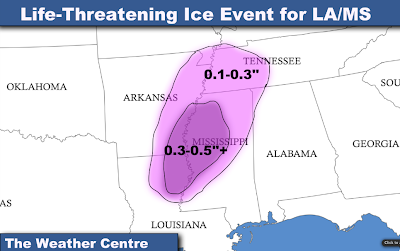 A life-threatening ice event looks to be unfolding for Louisiana and Mississippi in the next 24 to 48 hours.

A departing storm system will bring cooler air behind it. Some of this cooler air appears likely to mix with the already-present warmer air and should infiltrate precipitation. When this happens, freezing rain is expected to occur and accumulate in Louisiana and Mississippi. As a result, many areas may experience life-threatening conditions, especially due to the typical lack of winter in the mentioned states.

If your car begins to spin out, or you plan on traveling during this event, follow these tips:

-Use front-wheel drive. Traction is increased as the weight of the car (including the engine) adds an enhanced grip to the tires.
-If you suddenly start skidding on ice, keep your wheel turned to the direction you want to go. It is not advised you steer towards the direction you are skidding.
-If you are in a skid, slowly lift the accelerator foot off of the accelerator. This lets the car go slower, and thus a smoother skid.
-If your wheels lock up when braking, pump the brakes gently to regain traction and control.

Email ThisBlogThis!Share to TwitterShare to FacebookShare to Pinterest
Related: Southeast 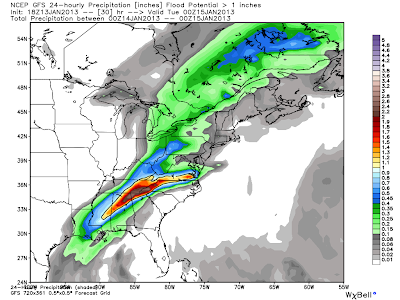 Very heavy rains appear to be in the forecast for the Southeast, including states like Mississippi, Alabama, Georgia, Tennessee and North Carolina tomorrow, January 14th.

A disturbance will be in the area tomorrow, creating the potential for heavy rains. The GFS model is printing upwards of 2 inches of rain in a 24 hour period from tonight to tomorrow evening, with the heaviest rains centered over southeast Tennessee. Such heavy rains in such a short amount of time create a problematic scenario where flooding can arise very quickly, depending on how fast the rain falls. My concern is that some areas in Mississippi and even parts of Louisiana may get some un-needed rain, after a drenching last several days. Luckily, rivers are not agitated in east Tennessee and nearby areas, so any flash flooding is likely to be relatively minor and non life-threatening.

Andrew
By Andrew at 4:21 PM No comments: Links to this post

I expect the worst of this winter's cold to start up in Late January as more moderate cold, and really get going into February.

I want to first analyze the observed snow cover anomalies over the North Hemisphere in the month of October 2012. There has been work done which suggests a negative correlation (Factor A goes up, Factor B goes down) between October snow cover anomalies and the Arctic Oscillation (AO) in the following winter. So, in times of below normal October snow cover, the corresponding part of winter would then be expected to have warmer temperatures across the US. Likewise, above normal snow cover would hint at a negative AO and thus cooler temperatures.

If we take a look back at observed temperatures for the month of December 2012, we find 'Above Normal' to 'Much Above Normal' temperature anomalies in much of the central and east US. This corresponds very well with below normal snow anomalies in the first half of October. This proves that this winter appears to be lead by this Siberian connection, meaning it is a valid hypothesis to say you could use this correlation to forecast the rest of winter. If we jump ahead to today, we find that the first part of January has been fairly warm, once again matching up with Siberia's below normal snowfall near the halfway mark of October.

However, once the cooldown at the end of January hits, we have then reached the equivalent of just after the halfway point of October, where snow cover was slightly above normal, and thus cooler temperatures would be predicted for the US. Moving on towards the end of October, Siberia encountered anomalously high snow cover, meaning that February could very well lead to well below normal temperatures not experienced in years. This happens to coincide with the potential time period that the polar vortex may come crashing down, something we will discuss later on.

Another piece to the puzzle involves something called the Madden-Julian Oscillation, or MJO. The MJO involves the certain location of anomalous precipitation across the Pacific Ocean. The above forecast graph is cut into eight sections, and each section defines a different placement of this precipitation. Phase 1 is the furthest west, with the highest precip centered in the Indian Ocean, while Phases 7-8 are the furthest west, putting the precip in the far east Pacific or even into the Caribbean. Right now, we are in Phase 6, which is known as one of the phases that causes warmth to overrun the nation during the winter months. In order to get back to a pro-cold solution, we want the MJO to cycle around to Phases 7-2. While that does look to happen, the strength of the MJO appears to be dissipating with time, shown as the forecast models' (colorful lines) tendency to go towards the middle circle, where the MJO is too weak to have any profound affect on the weather. If we saw the MJO sustain its strength and head towards Phases 8-1, we would be in a very good place as far as cold weather potential goes. If we did happen to reach Phases 8-1, it would likely be during the first week or two of February, fitting in nicely with the aforementioned Siberia connection. 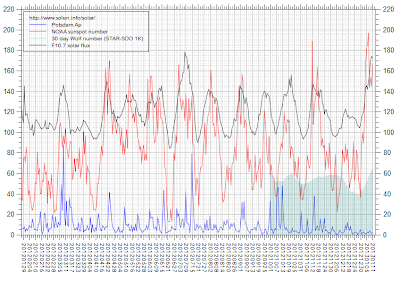 
Both the GFS and ECMWF models - two very respected and accurate forecast models - are showing the polar vortex collapsing into the United States. For those unfamiliar with the term polar vortex, it refers to the low pressure that is stationed over the Arctic, and its varying strength drives the amount of cold air let down to lower latitudes. When it shifts south, frigid air flows with it, and if it comes into the US, you can expect brutally cold air. This collapse is expected to happen around the 22nd - 25th of January. If you look closely at the two models and what timeframe they're forecasted for, you will see significant differences in timing exist between the two models. As small as a 32 hour difference between the two models may be, it is more than enough time for something to happen to possibly prevent this whole thing from occurring. That's why we need the models to match up in order to even see the potential of this happening. 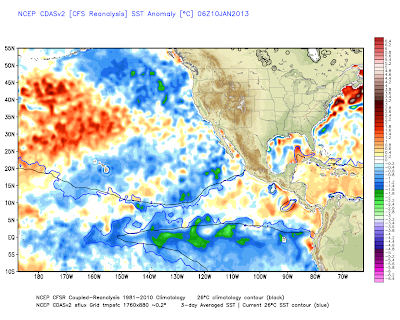 (Post Made on January 10, 2013) The latest sea surface temperature (SST) anomalies across the Equatorial Pacific indicate that a La Nina is beginning to emerge once again, as colder than normal water anomalies begin to show up in a pattern resembling that of the El Nino-Southern Oscillation (ENSO) phenomenon.

The ENSO phenomenon is commonly named as the driver behind winter weather conditions in North America. In a La Nina pattern, stormy conditions overtake the Ohio Valley and interior Northeast, with cold weather prevalent across the North Plains. Warmth is then present across parts of the South and West US, mostly in the South. The La Nina is what provoked the still-ongoing 2011 Drought that ravaged Texas and several other states.

It should be noted that there is a warm body of water about 100-200 meters below the surface that could hamper the development of this La Nina. I will address that when the time comes.

Andrew
By Andrew at 10:56 AM No comments: Links to this post