There is a chance of a major winter storm in the Eastern US around the November 14-16 timeframe.

The ECMWF snowfall forecast is truly remarkable. A swath of accumulating snowfall extends from southern Mississippi to the northern border of Ohio, and from Maine to the Carolinas. Plowable snow is spread from the Northeast to the Mid-Atlantic, but it is West Virginia and the state of Virginia that gets hammered with as much as 36.6'' of snow, per the graphic above. Now, before we elaborate on this graphic further, please know that the chance of this graphic verifying on its own as is is **extremely** low. The chance of this storm happening is low as well, but realize that the 36'' is most likely not going to happen.

The American GFS model is much less enthusiastic with the event, bringing about plowable snow in an area from western Pennsylvania to North Carolina. Obviously this is not as exciting as the ECMWF model, but I'm more supportive for this solution than the European one. I'm not entirely gung-ho on this solution as is, but it's more realistic than the ECMWF projection.

So why don't I think this will be a huge storm? Well, we have to define a few things first.

It is likely that there will be a storm system in the Central or Eastern US during this timeframe. The image above gives an overview of the 500mb height contours and anomalies on the left, as well as cloud cover and sea level pressure contours/markings on the right. This image shows the Northern Hemisphere as of the time of publishing. Take a look over at Japan. If you look closely, you can see a spot of negative height anomalies over the East Asian nation. A rule of thumb in the long range world indicates that stormy times in East Asia correlate to a storm system in the Central/East US approximately 6-10 days later. With the negative height anomalies hitting Japan now, 6-10 days from today would put us in the November 13-17 timeframe, which is when the models project this winter storm to happen. That is a good thing for those of you wanting a snowstorm, but before you get excited, let's continue reading into this possible event.


The GFS model projects the North Atlantic Oscillation to be positive during this timeframe, actually rising to a stronger positive stance as the potential storm unfolds. While there is truth to the idea that Northeast snowstorms can happen when the NAO is changing phases (i.e. positive to negative or vice versa), the NAO is just increasing its already-unfavorable attitude towards this potential snowstorm along the East Coast. I personally find that it would be difficult for this storm to move up the East Coast with such a strong positive NAO in place. Recall that the positive NAO allows a zonal flow (a flat jet stream, not wavy) to set up across North America. It would be pretty tough for a storm system to push north-northeast when the environment favors a west-to-east flow. Lucky for those in the Northeast, there will be a big Canadian high pressure system pushing into the Plains that will help out the chances for a snow event in the Northeast, and I will go more in-depth on that after this NAO discussion.


The European model isn't any better. It agrees with the GFS model in that the North Atlantic Oscillation will be strongly positive during this timeframe, and as I described above, the positive phase of the NAO greatly hampers efforts for this Northeast snowstorm, especially if the storm wants to go north-northeast per the ECMWF if the flow favors nothing close to that. There are always anomalies in the sense that the snowstorm may defy this positive NAO and dart north as a result of the huge high pressure system in the Plains trying to force the jet stream to bend around it, in which case the Northeast would have a decent chance at getting this potential snowstorm. However, the certainty in that proposal is much lower than the idea that the NAO will be moderately to strongly positive during this potential storm's timeframe.

Additionally, if you're one of the weather model junkies who prefer to live by the ensembles rather than the models themselves (a viewpoint that can be accurate when used correctly, but can be detrimental if over-trusted), don't argue the ECMWF and GFS NAO projections- the GFS ensembles and ECMWF ensembles confirm the positive NAO during the November 14-16 timeframe.

Now, the true wild card in those whole potential snow storm is Canada. Well, a Canadian high pressure system, to be exact.

You can clearly see the energy dropping south, right along the contour lines that show a steep ridging across the Western US, and then the downhill slope of contour lines in the Minnesota/Iowa area. This is the potential area of energy that would cause the potential winter storm, and its entrance into the US on the 12th bodes well with the East Asia correlation of a potential cold weather event/storm system between the 13th and 17th. Both the ECMWF and GFS agree on the entrance of this energy into the US around this timeframe, but the question is, how will the energy react when it encounters the rather-zonal flow along the East Coast (to which the positive NAO may be to blame)? Well, as the energy pushes southward, it is expected that some slight ridging will be produced on the waters east of the Southeast states. This would help northeast-ward movement of the storm system, like the ECMWF believes will eventually land it in the Northeast. However, if the ridging is too weak, the system may not move up the coast as eagerly. Or, if the ridging is too strong, it may stay further inland. Per the latest GFS and its ensemble system, the first option would come true, and the energy would meander off into the Atlantic, likely leaving some snow, but not a massive amount. I haven't seen a model call for due-north movement of the system in the event ridging is too strong- it appears to be the ECMWF's north-northeast movement vs. the GFS' eastward motion for this potential storm system.

Let's summarize all of this.

-There will most likely be a storm system in the Central/East US during the November 13-17 timeframe.

-A big Canadian high pressure system will drop down into the Plains to influence this potential storm system.

What we don't know

-The exact strength of high and low pressure systems in the Pacific and West US before and during the aforementioned timeframe.

So what do I expect? 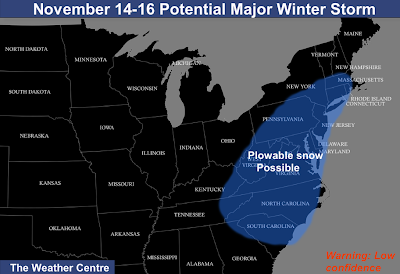 I believe there is a chance of plowable snow (in this case, 2-6 inches) stretching from South Carolina to Massachusetts, but this is a low-confidence outlook. I do think there is a decent chance of snow falling in the outlined area- the question is how much. I prefer to play it safe at the moment and will go with the 2-6'' projection in the Plowable Snow zone, due to GFS/GEFS agreement on such an idea, but if the American models start to side with the pro-snowstorm ECMWF, you may very well see this outlook adjusted accordingly.