There is indeed potential for a winter storm from March 23rd to March 25th.

We will do a model overview today. All models are forecasting Hour 144 (6 days away), and are showing 500 millibar heights in colors with sea level pressure in contour lines. To start, we will analyze the American GFS model. This model takes the storm into the southern tip of Lake Michigan at a minimum pressure of 992 millibars, considered pretty strong for an onshore storm system. Typically, storms will easily exceed that strength offshore in the Pacific or Atlantic, but close to 990 millibars onshore, while not infrequent, is relatively uncommon. Regardless, the storm system is taken through the Great Lakes, allowing significant snow to bury the Midwest and Great Lakes, upwards of one foot in many states west of Lake Michigan and into the Plains.

The general synopsis that is probable to happen is a storm system dropping from the northwest into the Plains, and then moving either east or northeast to bring winter weather to people in the north and severe weather to people in the south. The models are having trouble with grasping how far south the storm will end up dropping into the Plains and what direction the storm will head after encountering the high pressure in the Southeast and East US when the system is in the Plains.

We're going to move onto the foreign models now, and we start that part of this post with the Canadian model. Before I get into this model, know that it is notorious for being unreliable with storms and should not be trusted easily, no matter how amazing the solution is. The Canadian model has this storm system moving through south-central Illinois, dropping over half a foot in cities like Chicago, Gary, maybe even into Iowa (I haven't had an opportunity to see precipitation charts, just a few meteograms). The Canadian model drops this storm to 998 millibars, suprisingly weaker than the American model. The reason it is so surprising is because its usually the Canadian model over-exaggerating a storm's strength and not the other way around. Something to watch for the future? You bet.

We now go onto the United Kingdom's model. Because the phrase United Kingdom is too long to type every time I mention the model, I will refer to this forecasting system as the UKMET, its official model name. The UKMET sees this system weakly progressing in a track from Alabama to Ohio that would bring severe weather to the Southeast and snow to the southern Midwest. This is the weakest model yet of the three we have seen thus far, and its track is the third option of the three models. As you can already tell, the chances of figuring out a track for this system today are quite low.

The last of our foreign models is the European model. While it is typically regarded as the top forecasting model in the world as far as accuracy goes, I have been seeing a recent drop-off in its accuracy, and you may want to note that when taking this forecast into account. The European model doesn't show the system anywhere near the Midwest. If you look closely, you will see it off the coast of the Mid-Atlantic. It has cut across the South and prohibited any major snow event from occurring in the Midwest or Ohio Valley. While it is the fourth different solution from the four models we have seen, the European has been rather consistent with its idea of a storm system offshore the Carolinas for at least two runs. In the other models defense, the American GFS' idea of a major snow event in the Midwest, Great Lakes and Plains has been trending as well. Looks like the traditional American vs European model battle is setting up here, with the other foreign models just doing their own thing. 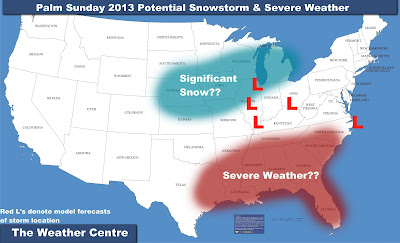 My current thoughts on this system are solid enough for me to show a swath of significant snow potential and a swath of severe weather potential. I am leaning towards the very weak model consensus that there will be the aforementioned types of weather in their respective regions. The red L's show where current model forecasts have this system, and as you can see, the consensus is loose at best.

Stay tuned to The Weather Centre for daily updates on this potential winter storm.
By Andrew at 5:36 PM 9 comments: