Hello everyone. The last 2 days have been dedicated to resting off one of my semi-annual colds, and it looks like i'm on the back end of it at this point. That said, I think it's time for the spring/summer 2012 ENSO forecast to be released.
This post will deal with several models and subsequent examinations of each model.


These are the ECHAMA and ECMAMF models, respectively. They are both based off of ECMWF forecasts which have been re-designated as climate models. I chose these two first as their ensemble members, first off come from the ECMWF and second, are the closest together of the bunch of other ENSO models.
The two ECHAM models are forecasting the Nino areas warming into a neutral phase by April, transitioning into an El Nino in June. I agree with this, as it is typical for the ENSO monitoring regions to warm in Spring and Summer. While the models do show the El Nino starting to fade going into September, I cannot say I am too inclined to believe that. This spring and summer may be a big warming that initiates the El Nino, but it is very possible that this warming keeps the El Nino into winter. It will either be an El Nino or neutral  phase.
The models put together paint a rough consensus of what should happen going into spring and summer. All of the models are agreeing that this La Nina will be fading into summer, but that's when the consensus stops. From there, the infamous CFS v1 and CFS v2 models keep the ENSO at neutral conditions for summer into fall, while the other, more accurate models are going for a neutral/El Nino solution.
We meteorologists use something called 'skill maps' when there are several models like this giving different solutions. A skill map basically outlines areas where the models have higher confidence than other areas. Using a skill map on the ECHAM models shows that the ECHAM models are fairly confident in a neutral/El Nino solution for spring/summer, while the CFSv1 is very insecure on a solution. Its next generation, CFS v2, is more confident in its solution than the CFS v1.

So let's say there is a weak El Nino into this winter (which seems like the likely option of an El Nino were to persist through fall). Here is what the precipitation anomalies would look like based on historical events of weak El Ninos. 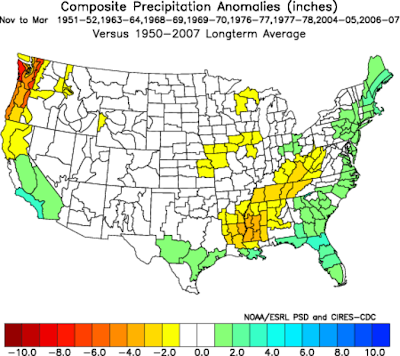 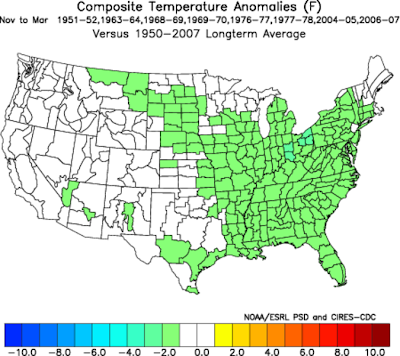 Here's weak El Nino temperatures, which is basically a cool down of the entire eastern half of the US. Again, this is what would happen historically, which hasn't always verified, as Mother Nature has shown this winter. This image of below normal temperatures implies to me that there are constant arctic shots of cold air into the eastern US.

So what am I thinking?
I am feeling pretty confident that the traditional spring/summer warm up of the ENSO region will make for a very weak El Nino in summer/fall. I am also going to say that this El Nino will likely peak mid-late summer and start to move towards the neutral ENSO phase going into winter. The question is if the El Nino will prevail this upcoming winter or weaken into a neutral phase. That I cannot answer- these are just my ideas for spring/summer into fall.

Any questions can be asked below.
Remember, personal spring severe weather forecasts will be issued tomorrow!
-Andrew

(credits for weak El Nino historical temp/precip: Data originally from ESRL, image from GGWeather)
By Andrew at 11:00 AM 7 comments: Links to this post