Good evening everyone, and welcome to the new Tropical Corner, where we discuss tropical weather across the Atlantic and East Pacific. Tonight, we are checking out Invest 92, just to the east of the Caribbean.

Invest 92 currently has a 20% chance of development per the National Hurricane Center, thanks to unfavorable upper level winds. However, as Invest 92 progresses west into the Caribbean, model guidance is suggesting strengthening will occur.

There appears to be a slight consensus of a west-northwest movement, but after that, it all breaks down as far as confidence goes.

This is a brief article, as I am strapped for time. I will revisit Invest 92 tomorrow with much more information. The Tropical Corner should be a regular segment, and I hope you will like it!

Andrew
By Andrew at 8:57 PM No comments: Links to this post

Has A Strong Trough Hit The North US Before, and What Does It Mean For Fall?

Model forecasts are pointing towards a monster trough entering the North Central US in the next couple of weeks. This trough is forecast to sit and be pretty much stationary over the region for a bit. This is not something we see too often, so we look to see if it's happened before. So, have we seen this before?

This is a chart of September 22nd in 1983. It shows 500mb vorticity on the top left, with 1000-500mb thickness and high/low pressure markings in the top right. The bottom two boxes contain different relative humidity values. Specifically, the 700mb RH on the left and 850mb on the right.

Analogs can be pretty powerful. Taking a look a week or two past this date, and here is what I find in the atmosphere after this date:

•Disturbance moves towards the Southwest and rapidly strengthens.
•Heat re-surges into the Plains and Midwest.
•Progressive disturbances move thru the US/Canada border.
•Another strong disturbance brings below-freezing air into the north central US on October 13.

What can one draw from all of this?

If we are to look at the ENSO phase, we see a strong El Nino in early 1983 progressing into a La Nina in the late fall and winter months, so this won't exactly play out. But, should this strong disturbance that is forecast to hit the North Plains and Midwest verify, 1983 could hold some hints. I do not doubt that the heat resurges into the nation, but a more active jet stream is not out of the question.

Time will ultimately tell, but analogs can be one of the most powerful tools forecasters can use.

Andrew
By Andrew at 8:46 PM No comments: Links to this post

Model Data Suggests El Nino Will Not Be Recognized This Winter

New model data is suggesting that the El Nino being so tediously monitored in recent days will not be recognized in time for winter. Before we make any conclusions, let's divide these forecasts into a couple categories to enhance better understanding of the situation.

The first category will consist of the first 3 models- the Australian POAMA, the American CFSv2, and the French ARPEGE model. The crucial thing that must be noted with these models is that they started in early September, giving them an advantage over the other models that were started earlier than this. Also, note that these 3 models have a totally different viewpoint on the next 1-3 months, with all models indicating a neutral 1-3 months in terms of ENSO. More monumental is the 4-6 month forecast that covers the winter months. All 3 models now suggest a NEUTRAL winter is in store. Considering underwater cooling is appearing, at the atmosphere remains very stubborn on accepting this El Nino, I can definitely see this as a possibility.

The second category will hold the American GEOS-5 model, the European System 4 (off the ECMWF), the Japanese JMA/MRI-CGCM, and the United Kingdom's GloSea model. First off, note that all of these models started their forecasts on August 1st, meaning that they are at a disadvantage to the first 3 models. These models may not recognize the possibly-occurring downfall of the El Nino, thus flawing their forecasts. The first 1-3 months of these model's forecasts hold a consistent El Nino, but in the 4-6 month forecast, note that all but 1 of these 4 models are showing an El Nino still sticking around. In comparison to the first 3 models, I find these 4 at a significant disadvantage based mainly off when they started their forecast. While you may not see this as a big deal, a month can make a huge difference, and I feel that that is the situation ongoing here.

These are model forecasts, which I have never been too fond of in comparison to analogs and observed conditions. However, based on these observed conditions, I do not find the first 3 models' forecasts to be totally out of line. They are definitely possibilities come winter. 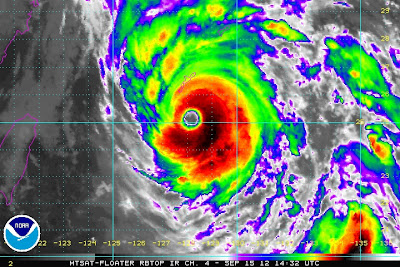 Typhoon Sanba is spinning in the Pacific Ocean, with a very well defined 'stadium-effect eye'.

The stadium effect eye is something only seen with the stronger of many hurricanes. It is pretty much what the name says- the eye looks like that of a circular stadium. If you were to fly a plane into the eye, the idea is that you would be able to see the clouds formed in a stadium-style formation.

Sanba is lashing out with winds of 232 kilometers/hour (144 MPH). The Japanese island of Okinawa is at risk from major and potentially devastating effects from Sanba. This threat appears to be verifying, as the outer eyewall appears to be approaching the island. The island of Okinawa can be seen if you look north of the eye, and is shown as an orange outline.

Andrew
By Andrew at 10:25 AM No comments: Links to this post