The latest GFS forecast has an accumulating snowfall in the forecast from February 1 to February 3rd.

The above image shows the precipitation type, mean sea level pressure (black contour lines) and 1000-500mb thickness (dashed and colored contour lines) for the morning of February 2nd. This would then change the storm title to February 2-3, but the event is likely to put down precipitation beginning on the 1st. It appears a modest storm system will be pushing out of the Rockies, leading to precipitation across the North Plains and into the Midwest. I do not doubt this could be the result of two separate pieces of energy, and such a scenario would result in quite a storm further east. There is high pressure off the Mid-Atlantic, something that would result in the storm track being pushed further north and west, favoring a Great Lakes Cutter storm scenario. 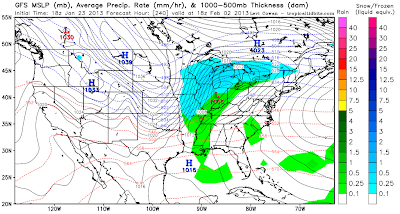 Moving ahead 12 hours, the storm has intensified in the Great Lakes as I expected, and heavy snow is ongoing across the Midwest, Great Lakes and Upper Midwest while a rain event occurs in the Ohio Valley and Gulf Coast regions. Judging by the liquid equivalent snow legend on the right-hand side, it would not surprise me to see upwards of 4 inches of snow in many areas of the Midwest and Great Lakes if this forecast verifies, which isn't that likely at the moment. Strong Arctic high pressure filtering in through the Plains would provoke lake effect snow in the storm's wake.

Another 12 hours into the future, we see the storm has further intensified, and is dropping large amounts of snow across much of the Ohio Valley and Great Lakes into southern Canada. A glance at the liquid equivalent legend for the hardest-hit areas would mean nearly 10 inches of snow could be falling within a 12 hour period if ratios remain the typical 10 inches of snow to 1 inch of rain. Any higher, and we would be talking about over a foot of solid snow on the ground in parts of the Ohio Valley. Rain is overspreading the Northeast area as a result of the warm sector impacting the region with...well, warm air.

So, this is just another fantasy model forecast that won't happen, right?

The Lezak Recurring Cycle (LRC) is involved here. The LRC includes a repeating pattern of weather disturbances and high pressure systems that repeat, or cycle, every 40 to 60 days. The cycle length varies year by year, and no winter's LRC pattern is the same. This winter, thanks to the dedicated folks at the AccuWeather Forums, it has been found that the cycle length is 53 days. If we rewind February 3rd back 53 days, we get December 11th. Now, look below and see the comparison between the forecasted 500mb height anomaly on February 3rd (top) and the observed 500mb height pattern from December 11, 2012 (bottom).


What a coincidence- they are almost a perfect match! You have the deep low pressure in the North Plains in both, slight high pressure in the Pacific Northwest in both, and even high pressure slightly displaced from the Southeast on Dec. 11, but still just offshore on Feb. 3. This proves that the LRC does indeed have a role to play here, and if we look at observed precipitation for that time period in mid December, we find that, should a similar precipitation pattern play out, over half a foot of snow for the Ohio Valley and parts of the Midwest.

The Storm Prediction Center has outlined a risk of severe thunderstorms for January 29, 2013.

Before we get into this, it is worth noting that outlining severe weather risk areas this far out is very rare. The Storm Prediction Center will only do such an outline if confidence is high that a severe weather event (possibly significant) could occur. Some of the worst severe weather outbreaks have been predicted at this same forecast period of 6 days away (although it days Day 7 (D7), it is actually 6 days away because Day 1 is referred to as the present day). I'm not saying this will be an incredible weather event, but such a long range forecast certainly says something. 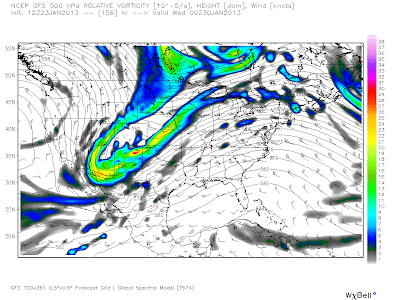 We'll start off with the general synopsis. A strong, positively tilted storm system will be pushing east after coming into contact with the Southwest. The phrase 'positive tilt' refers to the highest vorticity values being positioned towards the southwest. This is good news, as negatively tilted storms (highest vorticity pointing towards the southeast) are known to be more volatile as far as severe weather goes. Nevertheless, this storm system will be pushing east towards Texas. This image is valid for the evening of January 29, which is when we expect this severe weather event to be ongoing. Seeing as how high pressure is in place over the Southeast, I would not be surprised to see the storm system take on a neutral (vorticity maximums pointing to the south) or even negative tilt as it rolls up the hill of high pressure. This could cause more severe weather chances for states in the Southeast in the future, but that remains to be determined. One bone I have to pick with this forecast is I am not comfortable with the storm system being so far from the predicted severe weather zone. I can see a band of vorticity readings in southeast Oklahoma that would attempt to provoke severe weather, but in order to see this risk verify, I would like to see the system further east, closer to the severe weather zone. 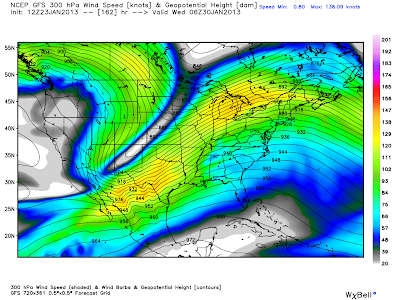 Upper level winds show great strain being inflicted upon the jet stream for the same forecast timeframe of the late hours of January 29th. The storm system is clearly shown by the blade of quiet winds in the Northern Plains into the Rockies. Again, you can see the positioning of this 'blade' depicts a positively-tilted storm system. Winds reaching above 120 knots are forecasted across much of Texas and northern Mexico in response to this great strain, not unlike a rubber band being stretched. As the system moves east, the jet stream should be provoked to tilt this system to a more neutral angle as high pressure tries to push in on the West Coast. Anyhow, strong upper level winds exist in Arkansas at this time, the predicted zone of severe weather. However, again, the strongest winds are centered further west in Texas, making me revisit the question of whether this risk should be moved further west in accordance with more favorable upper level winds in that area. 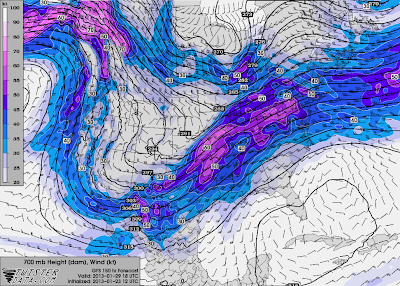 But all that doubt in the placement of the severe weather risk area subsides when you take a look at the 700 millibar forecast map for the same timeframe as the above two maps. This forecast shows wind speeds in the lower levels of the atmosphere, in the domain of the nocturnal lower level jet stream (LLJ). The LLJ is a well-known instigator of severe weather and even tornadoes overnight. So if you're wondering how the atmosphere can sustain that energy when the sun has gone down, there's your answer. There are poised to be strong winds in the lower level jet stream over eastern Kansas and parts of Oklahoma and Arkansas. This does ease many fears about the Storm Prediction Center being wrong in their placement of the severe weather risk, but I'm persuaded to believe that the risk should be pushed a tad west, more in line with west AR, east OK and east KS for the maximum risk areas. 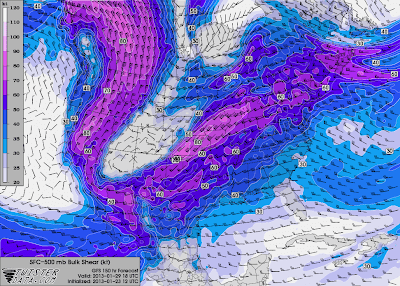 Finally, we take a look at deep layer shear, or DLS values for the same evening of January 29th timeframe. The higher shearing values indicate a more favorable environment for tornadoes in the spring, summer, and any time the climate is prepped for severe weather. If this forecast comes to fruition, I see no reason why a substantial tornado threat would not exist in the aforementioned areas in Kansas, Oklahoma and Arkansas. We see very elevated valies over these same areas, even extending into Illinois and Wisconsin.

Here's my map and discussion for this event, subject to potentially major changes: 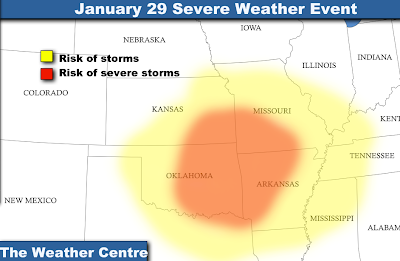 I expect the system to be too far west to comply with the Storm Prediction Center's outlook, and positioned my highest risk area over the regions where highest shearing would occur. I made sure to include where more favorable upper level winds would be positioned to aid in severe thunderstorm development, and lower level winds were also factored into this map. While the dewpoint gradient may be a bit further east than this highest risk I am projecting, I believe this is an accurate depiction of my thoughts at the moment, which are fluid as forecasts continue to come in.

Andrew
By Andrew at 4:18 PM No comments: