This is the ECMWF's Late Fall-Early Winter 2012 Forecast as interpreted by The Weather Centre. I will not provide the actual image out of copyright concerns. 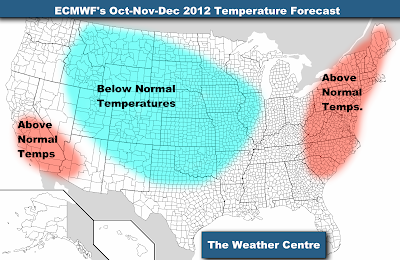 The ECMWF's climate model is projecting a big swath of the Plains, Midwest and Rockies to be in a slightly cooler than normal state in this timeframe. No frigid temperature anomalies are expected to arise, although such a potential would be maximized in the Southwest states (New Mexico into Arizona). The Northeast and Southwest are portrayed as areas with above normal temperatures, the Northeast bearing the warmer brunt of the two. 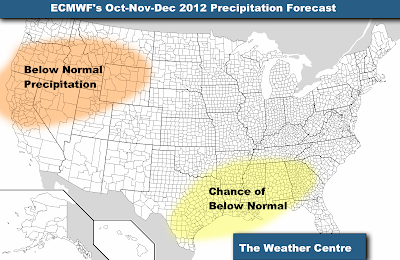 Keep in mind these forecasts are from one model of at least a few dozen- one fish in a never-ending sea, so to speak. So don't lose all hope just because one model says little precipitation is forecasted.

Andrew
By Andrew at 4:11 PM 3 comments: Links to this post

**THERE IS NO HYPE IN THIS ARTICLE**

I now believe Tropical Storm Sandy has real potential to affect the East Coast, whether it be from a tropical viewpoint or on the snowy side. This is indeed a pretty bold statement, so let's decipher why I think this could get serious.

The first thing we must examine is teleconnections. Above is a multi-model display of the 0z models and ensembles' predictions of the North Atlantic Oscillation. The North Atlantic Oscillation, or NAO, has two phases: positive and negative. In the negative phase, a colder and stormier pattern is encouraged over the East US as the jet stream dips south. In the positive phase, warm conditions can be found in the East.

Models are forecasting the NAO to stay well in negative territory, possibly well into November, but that's another story. The key piece is that the NAO will be extremely negative from now until October 27. Because teleconnections observations and their effects are delayed (the atmosphere doesn't work that fast), we want a good 3 day lag of negative NAO values before the storm strikes to show that the NAO would support such a possibility of an East Coast threat. Looking at the NAO forecasts, there is a good consensus on such a negative period through Halloween, which will enable the jet stream to dip in a negative NAO pattern. This provides a base for a theory on an East Coast threat.

This is the ECMWF forecast for hour 96, showing 850mb vorticity, 500mb heights, and MSLP readings. These three combine to give a fairly accurate depiction of where disturbances and high pressure systems are located. 96 hours (4 days) away from now, we see a very strong Sandy sneaking by Florida. However, notice the reds and oranges in the Ohio Valley and Northeast. That is a disturbance. We can now apply the Fujiwhara effect.

As the storm moves north (likely influenced by both the strong cyclone to the northeast and the advancing disturbance to the west), it has two options, which is the key player that is confusing the models. Here is a breakdown of each option.

Option 1: The storm moves north and is coaxed east by the strong disturbance located to the northeast in the image above. The storm keeps moving northeast and does not affect the US mainland.

If we look at the 12z ensembles forecasts for Sandy, we can see that they are showing both potential options happening. However, one can see that the edge is given to Option 2, where Sandy makes landfall on the Mid Atlantic/Northeast. Such a situation could be dangerous- similar to how Nor'easters 'bomb out' (rapidly strengthen) in the wintertime as they go up the East Coast, Sandy could very well do the same, bringing a tropical hurricane to an extratropical (not a hurricane) monster that would likely bring rain, snow, and a severe weather threat to much of the East US. 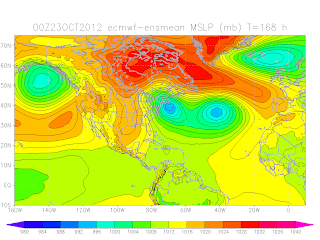 The ECMWF Ensembles (very reliable in my eyes) go as far as to say Sandy will merge with the Ohio Valley disturbance mentioned above and make landfall. Such a merge is called 'phasing', meaning two storms coming together into one. Again, the storms would be attracted to each other and Sandy would be persuaded to move west and retrograde (storms moving west in the North Hemisphere) into the US. 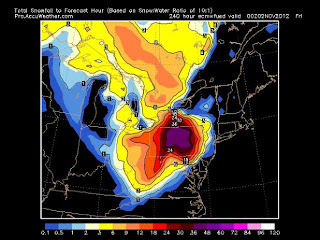 I honestly don't want to even discuss snowfall amounts, but here's some 'eye candy' for you winter weather lovers. This is off the 0z ECMWF and is 240 hour (10 day) snowfall total. This is from AccuWeather Pro and should be referenced as such if you are going to use this image. (Know that the data is not from Accuweather (snowfall forecast), the layout of the image is (color scheme, outline of image, etc.))

In summary: I believe that the East Coast has a threat on their hands. How great this threat actually is has yet to be determined. However, I advise all East Coast residents to keep a close eye on this system. If I lived in the Mid Atlantic, I might want to just keep an eye out at the moment, maybe make sure you have necessary supplies in the event of any evacuation at any time, not just for this event.

Andrew
By Andrew at 3:51 PM 6 comments: Links to this post