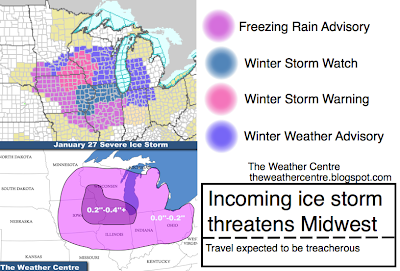 PLEASE Share to get the word out -- this could be a life-threatening event!!

An ice storm is expected to unfold over the Midwest tomorrow, bringing with it accumulating snow as high as half an inch in some places.

Synoptic scale: A storm system will advance towards the Midwest and Great Lakes on Sunday. As it does so, warm air will advect (move) across the region, promoting warm air aloft but leaving a layer of below-freezing air just above the surface. This set-up is favored for freezing rain. It appears the icy part of the storm will strike during the late morning and afternoon hours, well into the evening hours before changing back over to rain near or after midnight on Monday.

Accumulations: Accumulations from the storm are expected to be nothing to 0.2 inches in states like Minnesota, Iowa, Wisconsin, Ohio, and Indiana. Heavier totals are anticipated in northern Illinois, eastern Iowa and southern Wisconsin. Model forecasts have dropped off considerably since yesterday's making of the accumulation graphic, but still remain within my parameters.

Preparations: If you get your power from an above-ground source and you live in the dark purple area, prepare to be without power all of Sunday, possibly into Monday, depending on how fast the ice accumulates and when crews are able to restore power. Travel is considered treacherous during the day tomorrow, and the Sunday rush hour will result in numerous accidents. Avoid travel if necessary.


From the National Weather Service:

THE FOLLOWING MESSAGE IS TRANSMITTED AT THE REQUEST OF MCKENZIE
COUNTY EMERGENCY MANAGEMENT AND IS AN UPDATE TO THE PREVIOUS
STATEMENT.

A WILLISTON BASIN INTERSTATE GAS LINE HAS BEEN CUT APPROXIMATELY 3
MILES EAST OF ALEXANDER. AS A RESULT...THE TOWNS OF ARNEGARD AND
WATFORD CITY WILL BE WITHOUT NATURAL GAS. MONTANA DAKOTA UTILITY
CREWS ARE WORKING TO REPAIR THE LINE WHICH WILL TAKE 6 TO 8 HOURS.
THEREAFTER...MONTANA DAKOTA UTILITY CREWS WILL GO DOOR TO DOOR TO
RE-LITE ALL GAS FURNACES IN ARNEGARD AND WATFORD CITY. SOME
RESIDENTS MAY BE WITHOUT NATURAL GAS UNTIL SUNDAY MORNING BEFORE
CREWS CAN GET TO EACH RESIDENCE.

By Andrew at 5:20 PM No comments: Links to this post

I am seeing that forecasts continue to enhance my much-anticipated suspicion that we will see a full collapse of the polar vortex, and this could be happening in the next two to three weeks.

We'll go image by image. This first image above is the Day 10 forecast of heights and temperatures. Areas of lower pressure are marked with the letter L, and are also shown with decreasing numbers closer to the center. Warmer temperatures are shown in warmer colors. We can clearly see that the polar vortex is nowhere near organization, a result of several sudden stratospheric warmings (SSW), an event that forces warm air into the stratosphere and increases chances for cold air about 2-4 weeks later. Typically, if we were to find a sturdy polar vortex, there would be a single low pressure vortice centered over the Arctic. However, in the above forecast image, we see three separate vortices of the polar vortex, none of which are close enough to the Arctic for me to determine that they are in control of said area. What I can determine is that the polar vortex is beginning its dramatic collapse that could bring a brutally cold February IF, and ONLY IF the atmospheric pattern cooperates.

If you saw the title of this post mentioning North America and Europe, you may be intrigued. However, if you look towards Greenland and then look east, you will see several arching formations. This signifies high pressure in the area, possibly leading to a negative NAO, which would then enhance cold weather over those areas.

The next image shows the same height forecast and temperature outlook, but now for the 30mb region of the stratosphere, typically defined as the middle-upper stratosphere. Again, we can see a very weak polar vortex split into multiple centers and multiple vortices across this layer of the stratosphere, enhancing the case that the stratospheric polar vortex is on its last leg. I have no doubt that, should this forecast verify, this will be an irreversible act that will prevent the polar vortex from fully recovering for the rest of the winter. We just went through a historic sudden stratospheric warming in recent days, that will take some time for the vortex to heal, if that's even possible anymore. In this case, we see the main vortice over western Greenland, which usually would be a concern for the negative NAO. However, the 30mb level does not have the same effect as the 100mb level in that the 30mb level is too high up to bring about any significant weather changes to the troposphere, unlike the 100mb layer.

Our final image is of the ECMWF's potential vorticity forecast. We see a mostly blue chart with a few colored areas. The warmer colors depict areas of higher potential vorticity, which will denote low pressure areas (in this case, the polar vortex). Blues denote higher pressures, which hamper the polar vortex's formation. In the above image, valid for Day 10, we see a very disfigured polar vortex. There are three separate vortices- one if over north Canada, another over Europe and a third in Asia. The Canadian vortice will act to try and push south into more of Canada and possibly into the United States if the atmospheric pattern allows. The second vortice over Europe will act to enhance cold prospects for the continent for February, as I attested to in yesterday's article here. The third vortice over Asia will provoke storm systems to begin making a rebound in the US after a recent dry spell over much of the nation, not helped by an ongoing drought in much of the Plains and Rockies.

I'm seeing good indications that the polar vortex is on its way down, and February should end up nice and cool to round out winter. Just how cold is TBD, but things are looking up.

Andrew
By Andrew at 3:20 PM 8 comments: Links to this post

The Storm Prediction Center has issued two separate areas of severe weather potential, with the 'D4' area outlining the potential for January 29th and the purple outline hinting at January 30 for the threat area that day.

The Storm Prediction Center did issue a smaller area for severe weather about 3 days ago for the same areas in the red outline, and was present up until yesterday. Yesterday, the SPC indicated that confidence was too low to outline a severe weather area, but as you can see today, the SPC is apparently very confident in their outlook, now issuing two separate areas of threats. 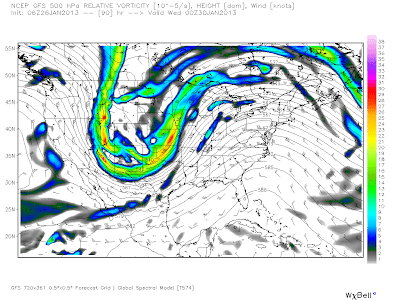 This is the 500mb vorticity forecast for the evening of January 29th. We can see a strong storm system is present in the Southern Rockies at this timeframe, with high vorticity values being found across the mountains and Plains. The system does not appear to be tilting its highest vorticity values in any particular direction, meaning this system has a neutral tilt. This is good news for those who do not welcome severe weather, as negatively tilted systems (highest vorticity values pointing to the southeast) tend to allow enhanced severe weather chances due to cold air flowing aloft, where storms can build and strengthen faster. If you wanted to be really specific, this can be classified as a slightly positively tilted storm system, but I'm not really seeing a difference because of just how slight that positive tilt is. 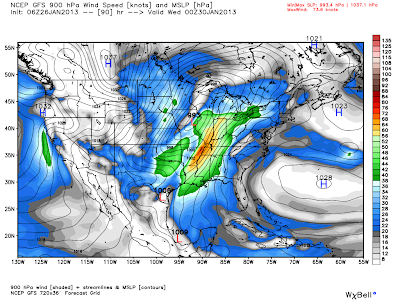 This is the lower level wind speed forecast, again valid for the evening of January 29. These winds are forecasted for the 900mb level, not very high above the ground. We can see very strong winds at this level across the Midwest and South Plains into the Gulf Coast. Lower level winds reach as high as 74 knots in east Arkansas. This enhances my theory that Arkansas will be the center of the January 29th outbreak. For those unfamiliar with the implications of lower level winds, tornado potential is enhanced in areas of stronger lower level winds, as wind shear is increased and thunderstorms are encouraged to form. 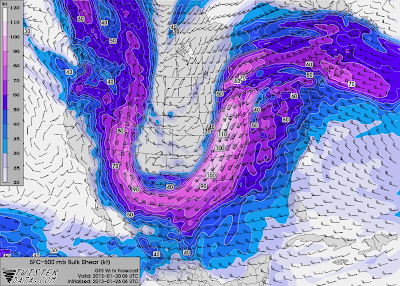 The last image I will show you is something called surface-500mb shear, also known as Deep Layer Shear (DLS). Deep layer shear is looked at during severe weather potential timeframes to evaluate if there really is a tornado potential. The first ingredient for making a tornado (other than having a thunderstorm) is shear. If you don't have shear, you cannot have a solid tornado. However, the deep layer shear forecast calls for shearing above 100 knots in western Arkansas, a significant value for winter. If storm activity maintains an individual cellular formation and blossoms in the areas with high shearing, tornadoes could be strong and widespread.

The first real evaluation of this threat will come tomorrow, when the Storm Prediction Center places this event in either Slight, Moderate or High risk of severe weather. Right now, I think this event will end up as a Moderate Risk event when the time comes, although that's for the SPC to define, not me.

Andrew
By Andrew at 3:20 PM 8 comments: Links to this post