Chance of a White Christmas

This year's chance of a White Christmas is substantially lower than what is climatologically expected for the country. We are expecting a white Christmas to happen in the Rocky Mountains, as well as the Canada/US border. There is also a low 'likely' section in the Northeast, especially by the lake effect snow belt. With no pattern changes expected soon, we believe that this is the best solution right now. Christmas is still a while off, so we will definitely be putting out some more ideas as to if this will verify. This does indeed depend on the Dec. 20 storm and the Christmas storm potential, so this map will be changing.
By Andrew at 1:00 PM 2 comments:

Times for each post for Town's Personal Winter Forecast

This is a set time for each 3 towns for each post for each day to be released.

This is for each day of forecasts released.
Here's the towns that will have winter forecasts made:
By Andrew at 12:50 PM No comments:

Chance of a White Christmas Map will be Out at 1:00 PM CST

Texas Under Winter Storm Watches for Over 12 Inches of Snow 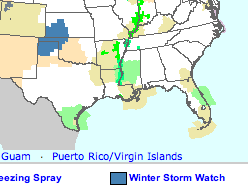 Texas is under a Winter Storm Watch for the December 20th storm (click here for this morning's discussion) as that area is expecting over 12 inches of snow. Here is what the models are saying:


The GFS is going in cautiously compared to the GFS, with maximum accumulations up to 15 inches, which is still a lot of snow.
The 12z NAM is going in, guns blazing, with maximum snow accumulations projected at 21 inches- nearly 2 feet! The NAM has been known to be a little on the heavy side with snow accumulations, so we will be going with the GFS for now, until we see the new 12z GFS, which ought to be similar to the 6z GFS as we are getting into the short range part of forecasting.
This post was just a briefing, and if there is anything else we will notify you.
By Andrew at 10:04 AM 8 comments: 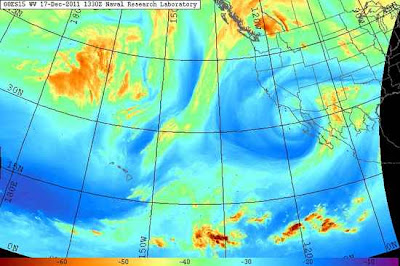 The system we are watching for a potential Christmas snow event is the area of dark blue water vapor to the left of the circle-shaped disturbance. It is the one that looks somewhat like a line. This disturbance will move southeastward and eventually make landfall into the Southwest. From there, the models are indicating the potential for this disturbance to slide eastward in the Southern half of the country and eventually 'bomb out' (strengthen very rapidly) as it comes into contact with the East Coast.
The area affected would be the Northeast if this all panned out. The Relative Predictability measures you may have seen in previous posts are not in a good enough agreement for me to feel confident about posting the image and having to explain possibly false information.
Just for looks, we will bring up the GFS Individual Ensembles (click to enlarge image).
The GFS ensembles are also mixed up right now, but most are coming to grips with it, and that prospect is encouraging. Our confidence level is very low right now because the models are not stable this far out. We will, however, continue to monitor this storm system and keep you informed for a potential white Christmas-bringing storm.
By Andrew at 8:34 AM 2 comments:

We are watching the system that will soon become the December 20 snowstorm spin offshore Baja California right now. It is a cutoff low, characterized by the distinct circular shape- some of its vapor is being transferred east through the jet stream. You can see this from a blue line stretching eastward from the cutoff low. The cutoff low itself will move onto US soil soon by the line of dark blue to the west of the cutoff low. This is another separate disturbance that will push the original cutoff low eastward, through the Southwest, and eject into the Southern Plains.
The cutoff low you see in the water vapor image above does indicate that this system has quite a bit of energy to work with. After moving into the Southern Plains and giving them at least a fair 4 inches of snow, the system will begin to work northward along a ridge in place.
The NCEP Ensembles are showing two things. The disturbance cut-off low, and the ridge of high pressure. The ridge of high pressure is the orange colors with the arcing isobars in the Southeast. Compared to yesterday, it looks like the ensembles are thinking twice about the extent of the ridge's influence in the Midwest. More influence would push the storm track of this disturbance farther north. We will have to closely monitor how the ensembles continue to handle this.
The second feature we see is the disturbance itself. Unlike previous runs, this run of the ensembles is in ally showing confidence that the storm will be present in a strong manner. Confidence is indeed high, with widespread 80%+ colors in the region of the proposed trough. The disturbance is characterized by the isobars taking a dip southward as seen around Texas in the image above.
To recap, we expect the disturbance to come out of the Southwest guns blazing, and likely put down a sizable accumulation in the panhandles of Texas and Oklahoma. After that, the storm system will be weakening as it crosses through the Midwest, with accumulations there topping out at 4 inches. The low will then move into the Northeast and likely strengthen as it is near the oceans, just like coastal storms. That said, some sizable accumulations may also fall in the Northeast. The entire time the storm will have to navigate around the ridge of high pressure in the Southeast, and may have some Gulf Air accompanying it to help strengthen and/or add more precipitation to the storm.
By Andrew at 8:22 AM 15 comments: