There is potential for a significant Nor'easter that would hit the Northeast on Valentine's Day.

The GFS model is predicting a storm system to ride the Southern US and shoot north along the East Coast, gaining strength as it does so from the Atlantic Ocean. This system would most likely be riding on an increasingly-strengthening subtropical jet stream, which does hold its domain in the Southern US and is commonly the preferred jet stream that produces Nor'easters. Global wind observations and torque anomalies tell me that this is indeed a potential significant storm system, if the energy can flow into the subtropical jet stream (STJ) and the stream can cooperate to send the system into the Northeast.

48 hour snowfall forecasts from the same GFS model run show as much as 18 inches of snow hitting central New York as a result of this event. If you do the math, that's just under a fourth of an inch per hour if the snow fell continuously. The more likely scenario would be very heavy snow falling in a relatively short period of time; snow does not tend to keep to a constant track of 'x' inches per hour.

This system has been showing up for a while now, and must be watched very carefully. The presence of an enhanced subtropical jet stream and a more active period incoming as the Rex Block places low pressure in the Southwest does provide chances for possibly significant snow in the US.

Andrew
By Andrew at 5:50 PM 5 comments: Links to this post

A Nor'easter of historic proportions will be setting up for the end of this workweek. 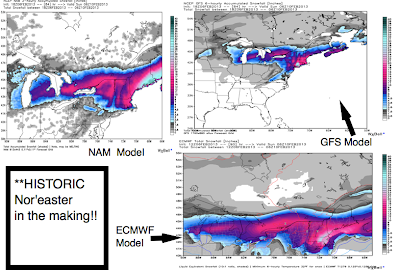 Pictured above are three forecast models- the American (GFS) model, the European (ECMWF) model, and the short range NAM model. All three models have their triumphs and their flaws. Generally, the NAM model is known to exaggerate snowfall totals. The European model is generally regarded as the best forecast model for winter storms, but has recently been faltering.

Regardless, a major Nor'easter coastal storm will be setting up just off the coast of New England to give the region a serious wake up call in the form of extreme snow totals. It appears that two bodies of precipitation will merge in the waters immediately offshore. The basis for this event will come from a storm system that is predicted to plow across the Southeast after originating in the Gulf of Mexico. The fact that it is coming from that region means it will be absolutely soaked with moisture. The second piece of energy will be sliding east from the Great Lakes, where it may drop anywhere from 6-12 inches in some parts of Michigan and even create a freezing rain event in portions of the Lower Great Lakes. This first storm system that comes from the Gulf enhances the potential for heavy snow, and the forecast models realize this. The current forecast is for the combined storm system to reach pressure levels as low as 983 millibars just offshore of Massachusetts. The presence of the Atlantic Ocean does contribute to this, and its formation in the Gulf of Mexico means all the more snow potential for the Northeast.

Andrew
By Andrew at 5:13 PM No comments: Links to this post