Storm Prediction Center has issued a Slight Risk for severe weather on 'Day 3' (2 days away, because Day 1 is today, day 2 is tomorrow, etc.). This Slight Risk includes a 30% risk of severe weather in Arkansas, Southwest Missouri and East Oklahoma, with formidable risks still present in Northeast Texas and the rest of the aforementioned states.

These 500mb winds are also concerning, as the top wind speeds appear to be up to 110 knots, which equates to about 130 MPH. This raises the concern for wind shearing. With high winds at different height levels in the atmosphere, wind shearing can take place. This shearing makes the environment for tornadoes much more conductive than without shearing. Unfortunately, that appears to be what will be happening in this situation. 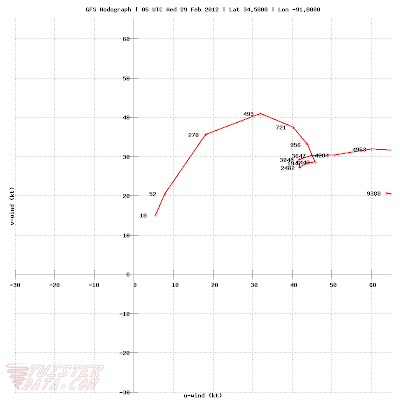 This is what's called a hodograph. Hodographs measure where the radiosonde is being taken by winds in the atmosphere, which are then used to tell if there is rotation in the atmosphere. A radiosonde is what is sent up in those big weather balloons by the National Weather Service. This hodograph is forecast for the time storms are to be present in Arkansas. This hodograph was based near Hughes, Arkansas.

In this hodograph, we see forecast strong lower level winds as the lines are very long from one number to the next. Notice how it begins to form a half circle shape, meaning that there is some form of rotation being detected at that point in Arkansas. Suddenly, the half circle stops and makes a full circle/square shape. This is exactly what no one wants to see.

What this complete shape means is that there is suddenly a very tight area of rotation in the atmosphere that could cause a tornado. No meteorologist ever wants to see that complete shape.

Moving on, the line then goes off the chart, but likely makes another half circle shape, again indicating some form of rotation may be present.

This hodograph tells us that there may be some tornadic activity in the area come February 28-29. I am concerned about that complete circle that was shown in the hodograph, and I believe that will be something to seriously watch. 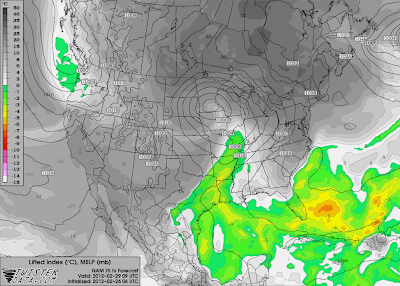 The NAM is showing that there will be a lifting mechanism in place to get the storms going. This image portrays the Lifted Index, or LI. When the LI goes negative, it means that stronger storms are likely. When it is positive, it means that the atmosphere is more stable than not.

The Lifted Index here calculates to about -5 in Arkansas and Texas, which is some pretty good instability that could very well get those storms rocking. 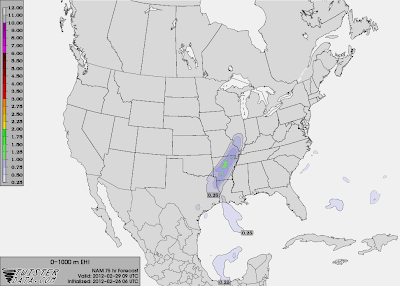 The final index is the Energy Helicity Index (EHI). It calculates rotation + energy (CAPE) in the atmosphere to make one of the better indicators for potential tornadoes. Values over 1 are considered apt for tornadoes.

In this image, we see values of 1 to 1.25 in some scattered spots in Arkansas, leading me to believe that Arkansas will be where the strongest of storms happen and where the best chance for a tornado will be. I find it hard to believe that people in the Lower Great Lakes will get anything big out of this as there will be more limited moisture and atmospheric instability.

All in all, I suggest you keep a sharp eye on this. It could get interesting.