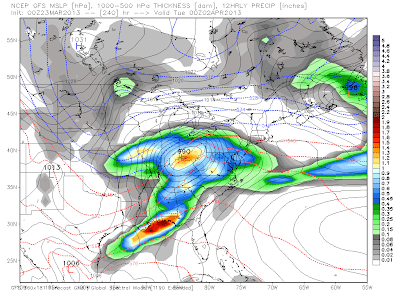 As much as a caveat a storm on April Fool's Day is, the long range American model has been hinting at a major storm in this timeframe for multiple forecasts. The timing of this storm and placement has not been precise in each forecast, but the gist that a storm may be present in the few days surrounding April Fool's Day is present. Above, we have the American model's 12 hour precipitation forecast with mean sea level pressure and 1000-500mb thickness in the dashed colored lines. We see a large swath of heavy precipitation on the Gulf Coast aligned in a slanted formation, and this could indicate a linear thunderstorm formation of sorts, possibly a squall line. However, the possibility of if this storm could even happen remains to be determined. As for the snowy side, we see some blues and oranges just north of the southernmost dashed blue line, and it is this line that is the rain/snow line. If this forecast were to verify, we could see as much as 10 inches of snow in northern Missouri. However, as great as some may see that forecast as, the potential in my eyes is too low for this exact forecast to verify. We will need many more days of model watching to see if any other forecasting systems catch on, or if the storm potential dies out completely (you might think that the premise is obnoxious, but it happens dozens of times per year).