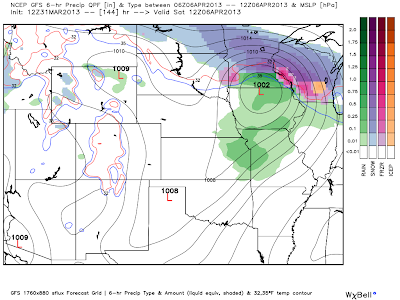 The potential exists for a winter storm to impact the Plains and Midwest between April 5th and 7th.

The GFS American model has a winter storm moving through the Plains and Midwest beginning on April 5th and continuing through April 7th. Current indications are that this system will drop from Canada and progress through the northern Plains and Upper Midwest. As the system takes this path, a snowstorm will likely evolve as cold air produced from the abundant snow cover in Canada and continued high pressure presence over the Arctic. 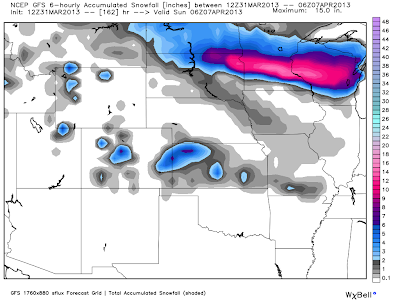 Model guidance suggests snowfall amounts from this system would well exceed half a foot, and many locations would top one foot of snow. The heaviest amounts would be found in west central Wisconsin, central Minnesota, northeast South Dakota and extreme southeast North Dakota. Lesser amounts would be found away from the aforementioned areas, but a sharp cutoff will likely exist south of those areas.

Now, the European model does not believe this will be a winter weather event. The model indicates a rain solution is the more likely scenario, and snow would not be nearly as abundant as the American model indicates. A few notes concerning the models, for those trying to pick out which solution is more likely for themselves: The American model has had recent success with storm systems over the European model. Models do not handle springtime storms well due to the unstable temperature profiles (in the sense that precip. types are more uncertain than in the winter).

I will not pick out a solution right now as too much uncertainty exists for my liking, but this storm does need to be monitored for the possibility of a late-season snowstorm.

Andrew
By Andrew at 4:01 PM No comments: Links to this post

Temperature anomalies from the last week show the lack of spring continuing throughout nearly every region of the nation, save the Southwest. Temperature anomalies, shown in Kelvin, dropped as low as 10 degrees below normal in the Dakotas, with even the Gulf of Mexico experiencing some of this cool weather. This cold weather has been provoked by prominent high pressure over the Arctic Circle and Greenland, as this reanalysis image from March 25th shows:

In response to this extreme high pressure over the Arctic and Greenland, low pressure has been provoked to develop over the central and eastern US, more-so over the latter region. As long as we see that high pressure area over the upper latitudes, chances are more than likely that the tendency for cooler weather will continue to fall upon the central and eastern US. With the cold weather, we also expect a tendency for low pressure in very similar regions, so storm systems moving into the eastern US could be more commonplace than instances of above-normal temperatures. 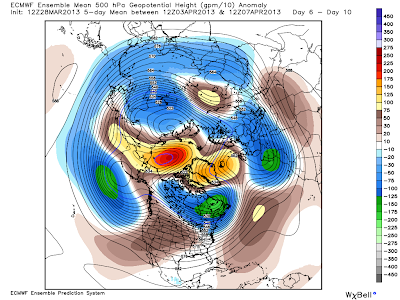 European ensembles predict that this high pressure will remain stagnant over the Arctic and Greenland from now until at least 10 days away. Consequential low pressure will also stay in place north of the Canadian Maritimes and into eastern Canada. New England will also be affected by this relatively stagnant body of low pressure, and these effects may range from below normal temperatures to unusually cloudy days (both of which I consider likely). High pressure attempting to develop over the Western US will enhance cold weather potential south of Canada, possibly encompassing millions east of the Mississippi. 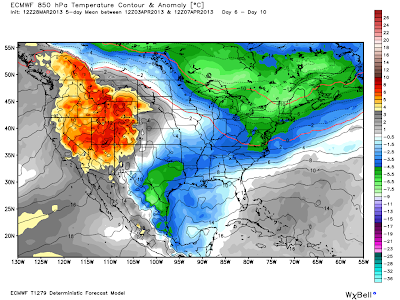 European model temperature anomalies 5000 feet above ground display this cold weather trend, clearer than day in the Northeast. Below normal temperature anomalies resonate well into Canada, sideswiping the Great Lakes and Upper Midwest. Warmer than normal temperatures will assist the skiing season in coming to a close in regions where resorts remain open. This forecast, valid for forecast days 6-10, is pretty likely to turn out when you look at what has been experienced and comparing it to what is being forecast. High pressure will remain favorably positioned over the Arctic to allow cold weather to hit regions of the US previously hit by the cold, and also spread eastward.

Summary
Next 10 days look to remain below normal in temperatures for the central and eastern regions of the United States. Warmer than normal temperatures should persist in the Western US. I feel that best chances for storm systems will be in the northern Gulf Coast (TN/AL/MS/GA) and north, along the Eastern Seaboard and into the New England area. Probably will not see any significant Nor'easters in this timeframe, although a wayward storm system well offshore may allow coastal cities to get a quick bout of precipitation.

Andrew
By Andrew at 4:00 PM No comments: Links to this post 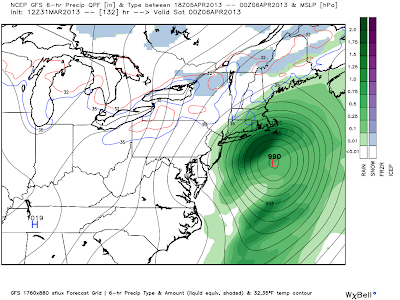 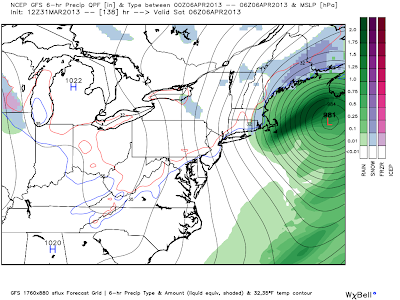 Model guidance remains iffy on the prospect of a potentially wintry storm system between April 5-6 in New England.

Discussion: Previous model guidance indicated this storm would be a mostly rain event, but new model guidance has this storm system producing wintry precipitation in southern Maine and a few other coastal states in the wake of this system. The American model, pictured above, has the system stay in above-freezing temperature territory for the heavy majority of its lifespan, hitting coastal towns with a rain event. As is the case with springtime storms, temperatures are much more marginal with this storm than typical winter storms. There is potential that there will be no snow from this system and it could be all rain. Logical forecast to go with right now is a rain event with weak backend snowfall. Heaviest snowfall (if any) would affect Maine, the state furthest north and thus furthest into the colder temperatures. Light lake effect precipitation is likely to commence when the storm moves off, but as winter draws to a close, we find the potential for massive lake effect snow events rapidly decreasing. American model has snowfall amounts staying at or below 2 inches for select coastal areas, whose locations are to be determined.

Andrew
By Andrew at 4:00 PM No comments: Links to this post