A look at preliminary long range forecasts from several models indicate that there is indeed potential for a La Nina to develop going into the sumer and fall months. The CCA and CA models, used by the Climate Prediction Center, are forecasting similar situations for the ENSO situation in that they both have a weak La Nina ongoing in the JAS (July-August-September) to NDJ (November-December-January) and possibly beyond that.

It should be noted that these two models are practically the same and are two models of several. That said, take these two for what they're worth, which isn't much for this far out.

This is an ensemble set from the CA model that was described above. The ensembles are in color, and the CA is in black. If we see the ensembles, we can see that the ensembles are in a fair spread, with a few heading to a moderate La Nina and a few others are more in the neutral ENSO situation for fall into early winter.

If you look beyond the fall forecast, you can see that DJF (December-January-February) has all ensemble members in a La Nina, which is something you may want to keep in mind...

Andrew
By Andrew at 5:20 PM No comments: Links to this post

What Are The Models Saying This Winter? Part 2

After I saw how much you all enjoyed the first post on what the models are saying for this winter, I figure you might like another post, examining other models and what their take on winter is. 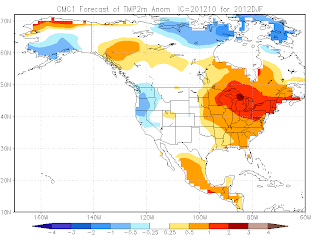 This is the temperature (top) and precipitation (bottom) forecast from what is referred to as the 'CMC1'. This model appears to be based off the CMC model, which doesn't have the best reputation for forecasting. This particular forecast includes a cooler than normal Northwest US, but that's about it as far as below normal temperatures go. Above normal temperatures are found in the entire East US, where anomalies are as high as 3 degrees above normal. As for precipitation, the West Coast is very much below normal, indicating that the storm track wouldn't be too active if this were to verify. The Midwest, Plains and Ohio Valley would be wetter than normal, however, and the Southeast would be below normal. This makes sense, as this resembles a positive PNA scenario and would be very beneficial to the Midwest/Ohio Valley/Plains. However, because the LRC has not taken storms along this path too much, I can't say I'm too confident in it.

I don't really like this forecast because we are about to commence a West-Based El Nino as seen in today's post (click here), and in a West-Based El Nino, you find a warm West US and cool East US. However, when it comes down to it, the El Nino is one of dozens of factors for this winter. 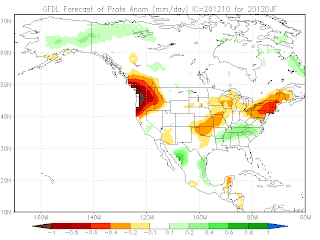 The next forecast of precipitation (top) and temperatures (bottom) comes from the GFDL model, commonly known as one of the hurricane models. The GFDL model shows a very dry Northwest US and below normal Northeast, Great Lakes and Midwest in terms of precipitation. There is a swath of above normal precipitation in the Southeast, however. As for temperatures, a below normal swath of temperatures is found across the Northwest and Northern Plains, while a warmer than normal forecast includes the Plains and Southeast. I can't say I trust this forecast. If you see the warmer than normal water anomalies in the upper right part of the image, you are seeing a negative NAO set-up. This commonly gives the East cool weather. Considering the month of October has been in a negative NAO and Siberia is above normal in snowfall, I disagree with this forecast.

Andrew
By Andrew at 5:18 PM 2 comments: Links to this post