The National Hurricane Center is forecasting Tropical Depression SEVEN to move to the west and eventually northwest along the Caribbean. This goes in line with my estimate on where this system could go. The link to that post is above.

If I were to look extremely long range, I would think that there is a fair chance of entering the Gulf of Mexico. However, this could be another 'Ernesto', and we all know how that turned out when the Gulf appeared at risk.

Caribbean May Be At Risk Over Invest 92

I believe that model guidance may be incorrect in assumptions that Invest 92 will be a threat to the East Coast and skirt the Virgin Islands to the north, as the steering layer chart above differs from the model guidance.

Steering charts are used for storms within a certain boundary of strength. This one is used for systems with central pressures at or above 1000mb, so we will use this chart to determine where Invest 92 will go. While it is not clearly defined, one can find it in the warm colors below the massive ridge in the Atlantic Ocean.

Looking at this steering chart, the models have good reason to be confused on the track- it is just below the ridge of high pressure. If it were to be influenced by this ridge, as many models are saying, the system would keep straight west and fire off towards the East Coast.
However, as a few models are starting to trend to, there is a tight belt of winds just below the ridge that would take the system southwest, through the Caribbean and possibly towards the USA. I find this to be more possible, as the warmest colors are in the belt of higher winds, and thus would have more influence on where the storm goes. Additionally, this is where the NHC indicates the system is, as shown below on the most recent NHC chart. Invest 92 is the one circled in red.

Andrew
By Andrew at 3:27 PM 2 comments: Links to this post 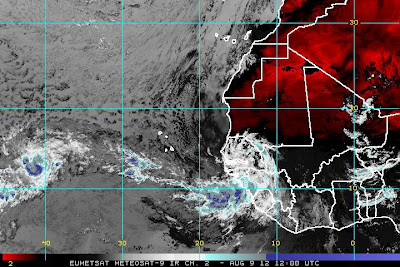 A disturbance is moving off Africa this morning that may eventually produce a threat to the Caribbean islands.

This disturbance is located in the middle of the 10 (degree) north line. Its appearance is disorganized, with the main cluster of showers and storms already offshore and mainly debris clouds in tow. Despite the disorganization, I see a potential tropical system on our hands, and here's why.

Because this system is at the 10 degree north line, I find it reasonable that, should movement continue west, climatologically the system would want to enter the Caribbean in a similar way in which Hurricane Ernesto did.

This steering layer wind map represents possible motions for storm systems with central pressures at or above 1000 mb. According to this map, the disturbance would likely continue to move westward and encounter a possible southward motion in the process, However, should this current pattern hold, an eventual westerly-turning-northwest movement would likely result.
Another possibility is that the system is pushed north and is thrown into the massive high pressure system holding an iron grip over mich of the Atlantic. This high pressure system would either result in an East Coast threat or throwing the disturbance out to sea.

But, even if it moves west towards the Caribbean, will it survive the trip?

This map shows shear tendencies over the Atlantic. At the moment, we have generally light shearing over the area where this disturbance would travel should it move west. This would prove beneficial for additional development. There is an area of about 30 knots of shearing on te lower right-hand corner of the image, which i where the system may run into some trouble. However, should it survive that bout, and low shearing holds up over the 10 degree north line, I believe additional development for the disturbance is likely.

Disclaimer: This is long range, and tropical systems are known to be notorious for long range forecasts. This is based off of what I believe may happen, but is not to be taken seriously until the system is a few days away due to the trickiness that comes with tropical forecasting. If it comes down to it, heed warnings from the National Hurricane Center and not from here at The Weather Centre.

Andrew
By Andrew at 8:11 AM No comments: Links to this post