Have removed the 'Potential' from the storm title, as the event is within the timeframe of reasonable certainty. 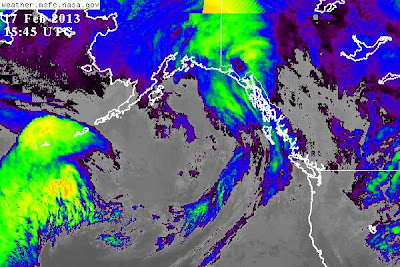 Satellite imagery shows the storm system of interest is in the Gulf of Alaska and nearly onshore in Alaska at this time. Analysis of the infrared field determines that the center of low pressure is on the coast of Alaska, with a very ragged comma shape still present in association with this storm. Surface analysis indicates the storm is in the 990 millibar range, so it is a fairly decent storm at this point in time.

Model uncertainty still remains a priority to deal with at this time, as it does appear there are two possible solutions evolving. Shown above are 500 millibar height anomalies for Hour 120, or 5 days away. Cold colors suggest the presence of low pressure, while warm colors favor areas of high pressure. The bottom image shows 850 millibar temperatures and mean sea level pressure for Hour 132, meaning it is 5 days and 12 hours away. This model is the North American Ensemble Forecasting System (NAEFS), a set of ensembles which I understand is derived from the Canadian and American ensemble forecasting systems. The NAEFS has done very well in the past two years for predicting temperature anomalies during the winter, this will be my first time seeing how it fares with storm systems. The NAEFS is predicting the storm system to ride east-northeast through the Plains and into the Midwest. This is not what recent model trends have been showing- the latest forecast models have taken it further north.

I can understand why there have been trends north. Shown above are 500 millibar heights (not anomalies, just the regular values) valid for Hour 96 (4 days away). We can see our low pressure system just beginning to emerge from the Rockies. The issue from here is where it comes out of the Rockies. The NAEFS forecast in this image has the low pressure system in far southeast Colorado. When you get storms coming from that area, there is a decent possibility that high pressure could push it north, and I believe this is where the European model is getting the idea of a northward trend from. Additionally, the storm will be reaching what's called a negative tilt by the time it is exiting Colorado. A negative tilt implies that a storm system's highest vorticity values are pointing towards the southeast, and this is where we find the big difference between the southern solution (NAEFS forecast) and the northern solution (European model). 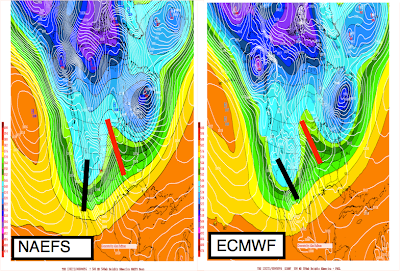 I put together the NAEFS and ECMWF (European) models together for the same timeframe. They are both forecasting 500 millibar values for 4 days away. The black line illustrates the tilt of our storm system, while the red line illustrates the tilt of the high pressure system in the Central US that is preceding this storm. The issue between the northern and southern solutions is that the European model wants to bring the system to a negative tilt faster than the NAEFS ensembles do. This is shown by the ECMWF image's black line tilted to the southeast, while the NAEFS is more neutral-tilted, meaning the highest vorticity centers are not tilted in any particular direction. In response to the negative tilt by the European model, the storm system digs to the Southeast more. This situation then responds similar to if you were to push some form of a wedge (shovel, for example) into the ground- the shovel (storm system) tries to dig down further south, but the ground (high pressure system) is provoked to move north in response, and this is how the European model gets its northern solution. 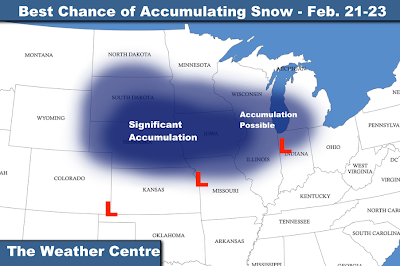 Despite this, I am willing to stick with my prediction that was made yesterday for this system. To me, there are three stages of the models. The first is the Long Range track, where the models get a consensus roughly 10 days away from the event. The second stage is what I like to call the '60 Hours of Chaos', where the storm gets within 8 to 5 days away (Hours 180-120 on the models) and the models go in every which way. The third and final stage is the final track, where the models converge on a solution within 5 days of the storm. This final track can sometimes be nearly the same as the first Long Range track. We already observed the first stage, and are now clearly in the second stage. The system will get on land in the next few days, so model solutions should clear up as the time comes closer. I should mention that the Chicagoland area into southern Wisconsin and north Indiana and southwest Michigan may see that 'Accumulation Possible' dropped if dry air manages to start that region with virga (precipitation is being produced, but evaporates in a dry layer of air before it hits the ground) as some sources are suggesting. There will be a lot of dry air in place just a day or two before the event, and this could very well hinder the already-lowered totals. I will most likely have my first accumulation map out either tomorrow or Tuesday; confidence remains low.