Stratospheric warming that was observed earlier in January now appears to be trying to propagate down to lower levels of the stratosphere, a development that would enhance potentials for a polar vortex breakdown.

The image above shows observed temperature readings (in Celsius) of the stratosphere and the troposphere for January through March of this year. However, because we are in January, that's all that has been filled in thus far. If you look at the colored portion of the image and see the encircled section, you will notice deep reds. This is the sudden stratospheric warming (SSW) phenomenon I have been discussing for days on end. When there is a SSW, warm air is forced into the stratosphere, weakening the semi-permanent Arctic polar vortex and permitting cold air to make a run at lower latitudes.

Usually, sudden stratospheric warmings will come and go, and their effects will come and go as well. Warm air pushed skywards will typically dissipate when the warming event has ceased. However, this time around, warming from recent SSW's is making its way downwards, filtering through the upper stratosphere down into the lower levels of the stratosphere. This, as previously mentioned, should coerce the polar vortex into at least a small degree of weakening; the extent of which is unknown at the moment.

If this warming filtration can persist, the polar vortex will continue to sustain very heavy damage, continuing to open the door wider for a colder back-end of winter in coming weeks.

Andrew
By Andrew at 5:01 PM 2 comments: Links to this post

This sudden stratospheric warming (SSW) was predicted a while in advance by The Weather Centre, but the magnitude of this warming was severely underestimated. Records have been shattered across the board, especially at the 70 millibar level, as shown above. The red line of observed temperatures has passed above the thin gray line, which is the record stratospheric temperature for that day. It is safe to say this winter will go down as a historic one, as far as the stratosphere goes.

So we have a very much historic SSW happening. As I have explained, there is a 2-4 week lag between the warming event and cold weather reaching the surface. If we saw a record-breaking warming like this, one can only imagine the potential there is for severe cold to hit the United States. The reason I say potential is because the cold's path will be determined by the atmospheric pattern at the time, something that will take another several days to determine.

Andrew
By Andrew at 5:01 PM No comments: Links to this post 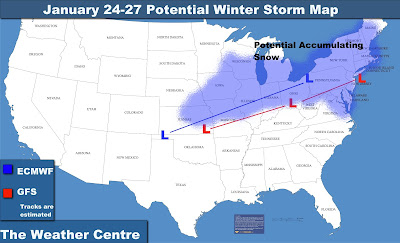 This is the current situation unfolding with the potential winter storm that would fall within the timeframe of January 24-27. I have displayed the two most reliable weather models' ESTIMATED tracks (I say estimated because I believe the ECMWF is actually a bit further south) for this storm system. There is a very messy agreement that the storm will happen, but that's where the line is drawn. While the ECMWF projects widespread accumulations, much of which falls within the blue 'Potential Accumulating Snow' area, the GFS is much more restricted on snow, with only parts of the Ohio Valley and Northeast benefitting.

At the moment, out of consistency, lower cyclone track error and overall better verification in recent runs than the GFS, I'm feeling much better siding with the ECMWF than the GFS. I feel that the GFS is just too wobbly for my liking, while the ECMWF has a swath of accumulating snow down pat in a situation much more fit to happen with frigid Arctic air to the immediate north. Additionally, the ECMWF's ensemble system is in good agreement with the blue ECMWF track, greatly enhancing the credibility of such a track. On the contrary, the GFS' ensemble system is disorganized with this system and should not be taken at face value- it faces some of the same issues as the GFS model itself.

At the moment, I will side with the blue track, but I will not map out accumulations due to model disagreement that I am not comfortable deciphering for the time being.

Exciting times ahead for many in this nation!

Andrew
By Andrew at 4:58 PM 3 comments: Links to this post

There is potential for a winter storm from January 24th to January 27th across much of the nation east of the Rockies. Let's do a model analysis and see what the latest forecasts hold. 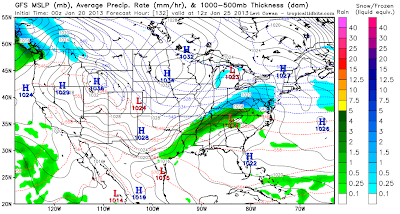 Shown above is the GFS forecast, valid for the morning of January 25th. We can see the storm system is centered in eastern Tennessee, with precipitation also shown. Snow is shown in blue, and rain is forecasted in the traditional green colors. We see the system is moving relatively eastward towards the Mid-Atlantic, dropping some accumulating snow as it goes. This snow would most likely accumulate in the northern Mid-Atlantic, with cold air still in place following this weekend's cold outbreak and additional cold air following in the wake of this system.

It should be noted that the GFS model has been swaying from a north track (snow hits the Midwest and northern Ohio Valley) to a south track (snow impacts the areas shown above), reducing my trust in its credibility. Now that we have seen the southern track, let's take a glance at the north track.

The highly-respected ECMWF model and its ensemble system (commonly called the EPS) are supporters of the northern track at this time. The ECMWF takes the system a bit north of its ensembles, putting the storm system in south central Indiana. Enough cold air would be in place to theoretically give snow to many of the areas described in the small paragraph above these images, like the Midwest, Ohio Valley and into the Lower Great Lakes. The EPS takes the storm system just a few hairs south of the operational ECMWF model, but nonetheless would keep accumulating snow within the same relative realm of the ECMWF model itself. A quick glance at ECMWF snow accumulations on a pay-to-view site agrees with my above thoughts in a swath of accumulating snow in Illinois, Indiana, Michigan and Ohio, to name a few states.

The Canadian GGEM model, usually not one to be in sync with other models, appears to be lining up relatively well with the ECMWF model, The low pressure system is a bit further north on the GGEM model, and temperatures are warmer than the ECMWF model, but the Canadian model can still theoretically be defined as in the north track. Although I don't really care for the GGEM on account of its messy track record, it's in one of the tracks at this time, and thus deserves to be noticed.

At the moment, looking at various teleconnections, I am seeing the Pacific-North American index go negative during this timeframe. This means negative pressure anomalies (low pressure) on the West Coast (hence negative PNA), which causes high pressure to build in the East. This would most likely prevent suppression of this storm, giving some strength to the North Camp. The Madden-Julian Oscillation (MJO) will be in a phase favorable for making storms stay away from the Deep South and instead taking a more northern route like the ECMWF/EPS are suggesting. The North Atlantic Oscillation (NAO), which, in its negative phase can cause Nor'easters, will be too weak to help this situation out.