Model guidance is beginning to converge on the idea of a potentially significant severe weather event over the February 20-22 period.

The Storm Prediction Center has already outlined a large area of severe weather potential for February 20th, centered from northern Louisiana into eastern Arkansas, eastern Missouri, a large portion of Illinois, and eastward into Ohio. States like Indiana, Kentucky, Tennessee, Mississippi and Alabama may be affected the most by this severe weather event.

For February 21st, the Storm Prediction Center then outlines an area of Georgia to southern New Jersey for an enhanced severe weather risk as the frontal boundary associated with this dynamic storm system moves to the east. In this post, because the threat area is a little more specific, we will focus on the February 20th severe weather risk.

Model guidance indicates we will see a strong storm system lift into the upper Plains, tilting negatively as it heads towards the upper Midwest on February 20th. The jet stream projection above for the evening of February 20th shows the highly dynamic situation at hand here. We have a jet streak in the range of roughly 110 knots to 130 knots, centered over the southern Midwest and Central/Southern Plains. Analysis of upper level divergence suggests strong values located over those same areas, and for that reason we are looking for the strongest storms to hit the area of southern Illinois, southern Indiana into western KY/TN, and Missouri into Arkansas.

A forecast image of the 850mb level, located about 5,000 feet above the ground, gives us the full picture for the evening of February 20th. We see a strong moisture fetch from the Gulf of Mexico, shown by not only the northbound wind barbs from the Gulf Coast, but also the swath of high relative humidity values along the frontal boundary. We see a sharp gradient in theta-e values along that frontal boundary, denoted by the dashed pink values, and this also spells out the potential for at least a decent severe weather event. Enhancing this event's potential even further is the 50 to 60 knot lower level wind speeds right over the severe weather threat areas we discussed above, and these lower level winds ought to really help out with storm development. However, the lack of directional wind shear (changing of wind direction with height) means any storms that form are unlikely to contain a vast number of tornadoes. I expect tornado reports from this event, but not that of an outbreak level.

A forecast graphic for the 700mb vertical velocity on the evening of February 20th shows intense lifting located over the same regions we discussed above, and this lifting will lead to the development of strong thunderstorms. Precipitable water values exceeding 1" will ensure that this will be a heavy rain system, and model guidance (as well as the SPC) seems to agree on the idea that this will be a squall line event, rather than multiple tornadic supercells. The squall line lowers the tornado threat, but greatly raises the damaging wind threat. It appears that the damaging wind threat will really maximize this severe weather potential. 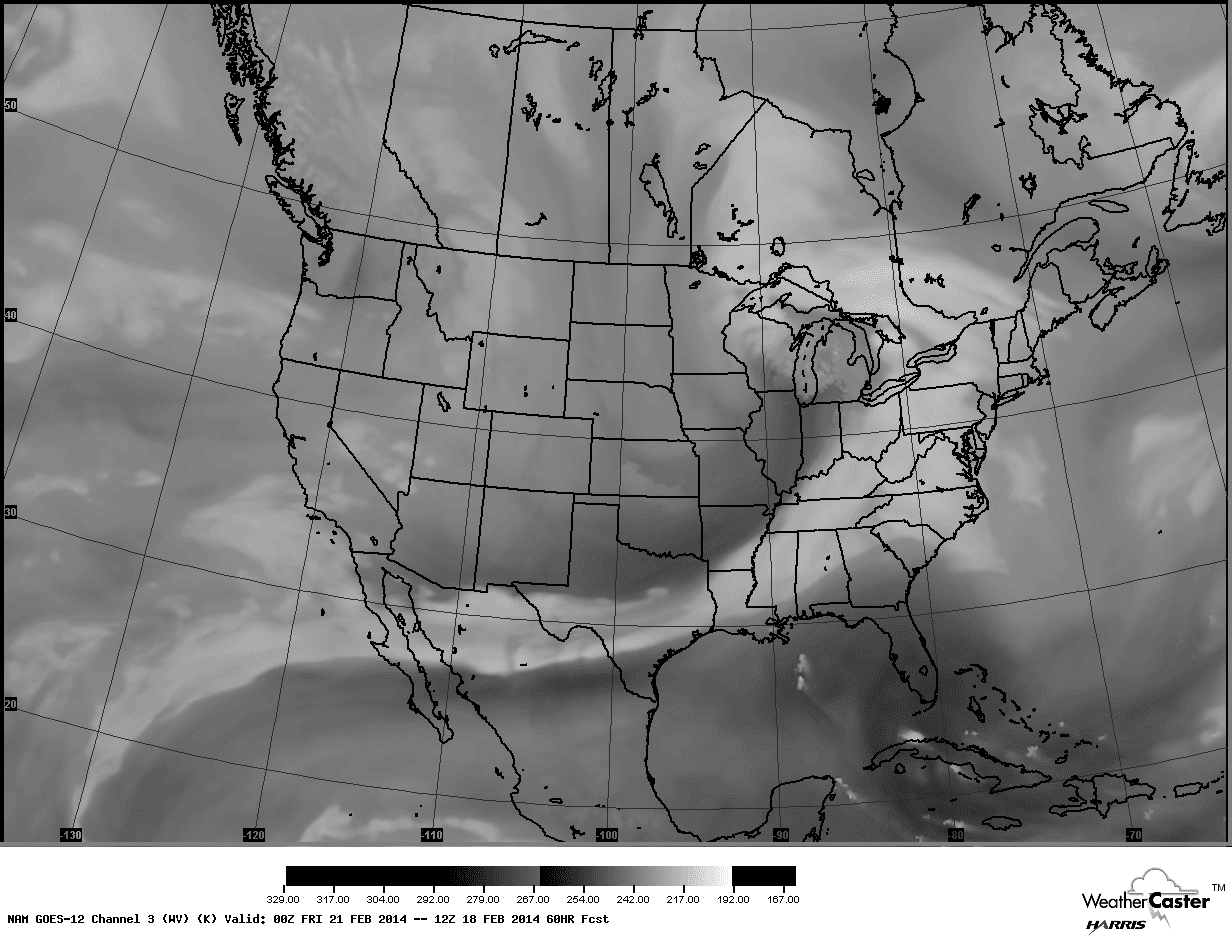 Adding fuel to the fire is how the subtropical jet stream will really help this severe weather event become the beast I expect it to be. See that long string of water vapor extending from the Central US all the way down towards Hawaii? That is a classic mark of the subtropical jet stream, close relative of the polar jet stream. During the springtime, the subtropical jet stream acts on storm systems crossing the US, and pumps warm, humid air into the warm sector of storm systems to enhance severe weather prospects. Additionally, we typically see stronger wind speeds as a result of the STJ, and this can enhance both directional wind shear and vertical speed shear (the change of wind speed with height).

All in all, I've got a feeling the Storm Prediction Center will nail its current outlook for the February 20th period. Model guidance seems to agree on a squall line event which will likely produce damaging winds, as well as an isolated tornado report.

Andrew
By Andrew at 8:28 PM 5 comments: Links to this post