**This post is dedicated to Madeleine Hsu, age 6, a victim of the Connecticut shootings.**

The Storm Prediction Center has outlined a Moderate Risk of severe weather for Christmas Day, including a 45% chance of severe weather in the pink area on the bottom image. It is not often you see a storm system produce a moderate risk in December, so let's look at the set up. 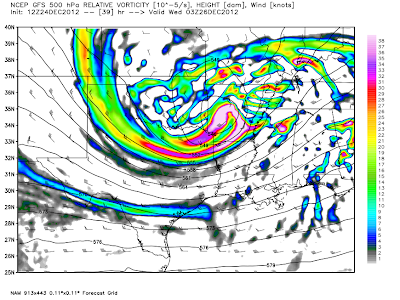 The 500mb forecast from the NAM model shows high vorticity values digging into Arkansas in the late night hours of Christmas Day. If you look closely, you can see the highest vorticity values tilting to the southeast. This signifies a negatively tilted storm system, meaning cold air is more prevalent aloft, and thus enhancing severe weather potential. 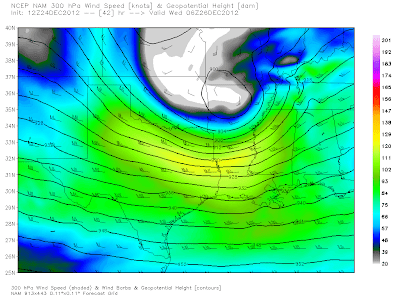 The jet stream forecast going into the day after Christmas shows this strong storm system pushing down on the jet stream, bringing about very high winds, as high as 130 knots. Again, not a common sight to see in December. The fact that there are such high winds aloft tells me that we will definitely have enough energy to provoke strong thunderstorms on the evening of Christmas Day. I am especially concerned for Louisiana and Mississippi, as the highest deep layer shear will be located in those states as shown below: 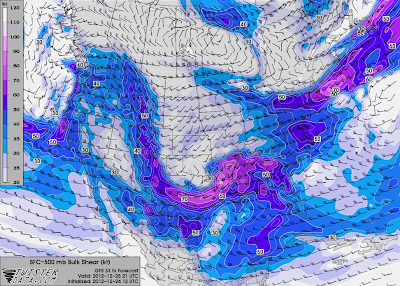 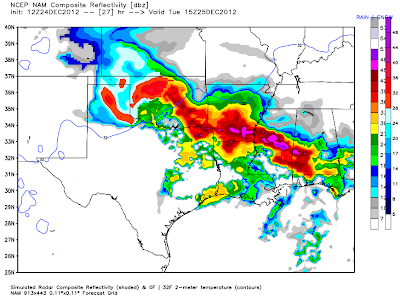 The simulated reflectivity for the late morning hours of Christmas shows very strong storms over Arkansas, Louisiana and Mississippi in response to this instability and favorable tornado dynamics. I have a feeling that individual cells will arise in LA/south MS to start the event, before the situation shifts to a more linear threat, thus higher risks for damaging winds and hail.

Be VERY careful tomorrow if you are in the outlined area by the SPC. There are going to be relatives visiting the Gulf Coast who may not be familiar with the area (weather-wise), and thus may not know how to appropriately handle such a severe weather risk.

Andrew
By Andrew at 11:49 AM No comments: Links to this post

**This post is dedicated to Madeleine Hsu, age 6, a victim of the Connecticut shootings.**

The next few weeks looks to be dominated by one of two patterns in the atmosphere, and both can have significant effects on who gets the most cold and snow. Let's take a look. 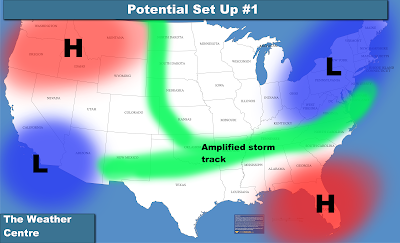 Set up #1 involves your average Rex Block forming on the West Coast. High pressure would be in place over the Pacific Northwest, with low pressure in place over the Southwest. However, the Rex Block would extend its high pressure more east than what a 'typical' Rex Block would do. In response to that, the northern jet stream (as it will be referred to in this post, a.k.a. the one coming from Canada) will be tightened and stretched further east, giving storms a more meridional pattern and a good basis for strengthening. Low pressure stationed in the Southwest would shed pieces of energy again and again, which would then move into the combined storm track in the South. Now, from here, things get tricky. We have high pressure stationed in the Southeast, a.k.a. a Southeast ridge, but also low pressure in much of the Northeast and Ohio Valley. I would think that storm systems would be provoked to take the path shown in green, which would favor the Midwest, Ohio Valley and some parts of the Northeast for the best snows. The lack of a good negative NAO tells me that not all of the Northeast could see this pattern as the jackpot, but nonetheless it will be interesting for all involved. 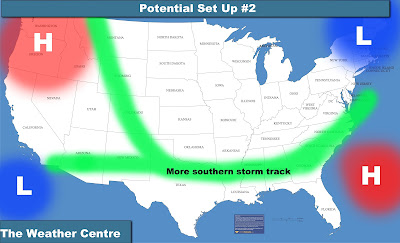 Potential set up #2 is a more moderated Rex Block pattern. The Pacific Northwest high pressure system is more confined to its aforementioned domain, thus the corresponding low pressure system is located slightly offshore of the Southwest. While this does result in a slightly less meridional pattern, the jet stream is pushed further south, good news for those along the East Coast. That Southeast Ridge is now slightly offshore of the Southeast, meaning that the Midwest and northern Ohio Valley is no longer in the sweet spot for the best snows. However, because that high pressure system is still present, storm systems will be diverted north, but will have done so just offshore the East Coast. A large depression of cold air present in New England would certainly enhance the probabilities that any storm system that follows this track to produce snowfall. It is also possible that the Southeast is too far offshore to have any effect, so the low pressure in New England covers the entire Eastern Seaboard. This would still have the desired effect of storm systems going up the Coast.

This dual-image forecast from the ECMWF (left) and the GFS (right) shows 500mb height anomalies across the globe, with blues showing low pressure areas, and reds depicting high pressure areas. The ECMWF seems to set up that Rex Block in a similar situation to Set-up #1, but the low pressure anomaly in the Northeast is too overwhelming to give any for-sure signs that the Midwest and Ohio Valley would receive decent snows from this pattern. This morning's 0z ECMWF model shows that the North Jet stream would also be amplified in a pattern similar to the Set-up #1, but the Southern Jet stream is cut off by the Rex Block. Such a scenario is certainly possible, but I would expect to see more gusto in the Southern Jet stream than is being forecasted. It appears that the GFS moderates the Rex Block, meaning it is abiding by Set Up #2.