There is potential for an accumulating snow event from March 9th to the 11th.

Forecasts have been consistently labeling this timeframe as one to watch for a snowstorm in the Nebraska/general Plains area. Shown above is a four-panel forecast from the American model detailing the potential for this snowstorm. We see that the storm system would be in Kansas for this forecast hour, and the precipitation on the bottom right image to the north of a solid black line is all snow. If we use that black line rule, we see that there would be scattered swaths of possibly significant snow. The exact placement of these swaths is to be determined, but model guidance consistency has me thinking that this snowstorm has a solid chance of happening. I will have more information tomorrow when new data becomes available.

Andrew
By Andrew at 5:03 PM No comments:

Pattern Change Around The Corner

There is reason to believe that a pattern change is around the corner- one that could delay the onset of spring weather in the Central and East US.

The pattern will begin to change with the aforementioned dominant high pressure formation in the Arctic Circle and Greenland into the Bering Sea. Persistent low pressure in East Asia is the byproduct of the polar vortex being forced out of the Arctic as this high pressure takes over. The 6-10 day gap between East Asian storm systems and East US storm systems suggests a stormy period may be in store for this part of the nation. Strong high pressure remaining stagnant over Greenland would suggest a track favorable for a storm threat along the Eastern Seaboard, with an accompanying severe weather threat in the South US in response to the high pressure over Greenland and thus an enhanced subtropical jet stream. 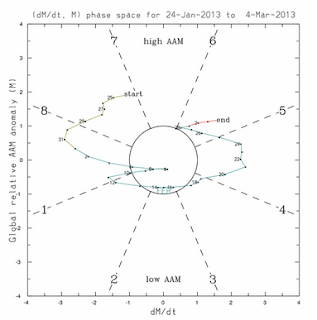 Reasoning for preference of a stormy East US and enhanced blocking over Greenland is shown above in the Global Wind Oscillation (GWO). In the sectors marked 'High AAM' (top half of the graphic), the weather pattern tends to be tilted more towards an El Nino pattern. In a similar fashion, the bottom half of the graphic labeled 'Low AAM' signifies a preference for a La Nina pattern when the GWO is in these phases. Most recent observations of the GWO indicate we are in a neutral/slight El Nino pattern. Expectation based on the past few months of observing the GWO tell me that we will see a more El Nino pattern favored from the evolution of the GWO to higher magnitudes. In response to this projected increase in the GWO, blocking high pressure over Greenland is likely to become further stagnant, and the threat for East Coast weather storms would be expected to continue. Chances for progression of GWO further into the later phases would be even more favorable for chillier weather and storms in the Eastern US, however the extent of this still-unsure progression is yet to be determined.

Recent animation of upper stratospheric temperatures suggest sudden warming is taking place over the Himalayan Mountain Range and is beginning to push northeast into the Bering Sea. The progression of this large swath of warming north and east towards the Bering Sea tells me that a sudden stratospheric warming is now unstoppable. We are seeing this large mass of warmth really push into the upper latitudes, and when it detaches from the Himalayan mountains like it most recently has, this means that the mass of warming must go elsewhere. I believe that we will see this mass of warming push into the Bering Sea and blow open into the Arctic. As a result of this warming in the Bering Sea, high pressure formation would be expected to occur in this body of water. This high pressure formation would most likely occur in the next 2-5 weeks and persist through the same timeframe as a direct byproduct of this sudden stratospheric warming. Personal feeling on this potential is more hesitant than the above paragraph may tell, as this is the upper stratosphere and not the surface. Downwelling of these high pressure tendencies will take time and could very well encounter numerous obstacles as they push down to the surface. Nonetheless, some effect is likely to occur. The most probable effect is this high pressure formation and persistence across the Bering Sea and even into the Arctic Circle if/when this warming event is able to penetrate into that region.

European ensemble forecasts confirm my suspicions of an incoming pattern favorable for those in the East US. This image portrays 500 millibar height anomalies over the next 6 to 10 days across North America. Dominant high pressure over Greenland makes for a solid negative North American Oscillation (NAO) that is necessary when looking for the famous Nor'easters. High pressure in the Bering Sea possibly enhanced by the GWO sets off a low pressure anomaly in the Gulf of Alaska, leading to high pressure in the West US, the textbook example of a positive Pacific North American (PNA) index. The positive PNA is commonly found in El Nino's and helps storm development in the East US.

In summary, here are my projections for the next couple of weeks.

My 2013 Official Severe Weather Outlook will be released at 12:00 PM Central time on SATURDAY, March 9, 2013. This new outlook is much more in-depth with many new factors to help decipher and accurately forecast this season's severe weather outlook.