"It's never too early to prepare. Now is the time."

Todays new model forecasts brought in a wide array of solutions, many now hitting the Florida Panhandle rather than affecting the East Coast head-on. What you see above is the European's ECMWF model, recognized as one of the, if not the best, forecasting models out there. Today's forecast off the ECMWF model proved interesting, with a 963 millibar major hurricane slamming into southwest Louisiana/far east Texas. I am not saying it will happen, nor am I saying it will not happen. However, the potential appears to be there.

We are watching a disturbance push its way to the east off the coast of the eastern United States. As you can see, the arrows on the lines show a northeast movement, and this could very well enhance Isaac's track. However, note that the disturbance is largely over the Atlantic and far from Isaac, reducing the potential for a sudden northeast turn that would possibly landfall upon the East Coast.
I want to make it clear that, should the current model consensus hold up, the system would landfall on the Florida Panhandle, move north (and possibly east), and may re-emerge into the Atlantic, where additional landfalling on the East Coast states may occur. However, at that point, Isaac will have dramatically weakened. 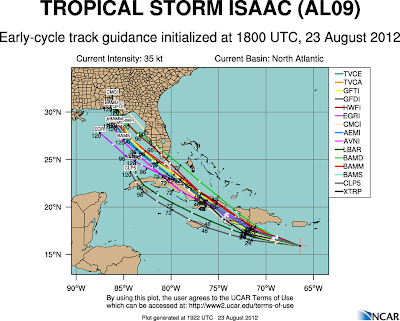 The most recent model guidance as of 18z today shows a general consensus taking Isaac into the Gulf of Mexico and hitting either in the Panhandle of Florida, or more into the central Gulf Coast. Because I don't know these models as well as I do the global ones (GFS, ECMWF), I am not confident giving an assessment on the track. However, if I were to speculate, I would say that the continued westward progression with little north progression is edging the models west, as they should.

As of roughly 20z today, the center of Isaac was observed at roughly 16N longitude and 67W latitude. What I care more about is the longitude. Because Isaac remains in the general 15-17N realm, I cannot see any East Coast forecast models working out. Even a scrape with western Florida is edging out of the question. It is now up to Isaac to either strengthen and get going, or remain weak and disorganized and possibly not make it up to the status the ECMWF is projecting.