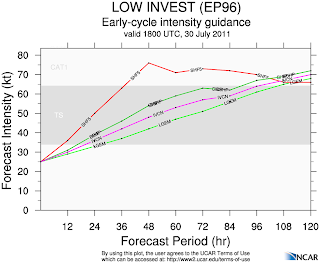 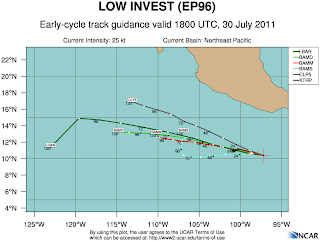 We are tracking a tropical system that may strengthen to hurricane status.
The Weather Centre has detected a tropical area in the Pacific Ocean that will not threaten land, but could turn into a Category 1 hurricane.
Intensity plots at the top indicate the storm will make it minimally to Category 1 strength. However, there are so few models that there can't really be a consensus yet.
Regardless of strength, this storm system will stay far away from land and move Northwest towards the Central Pacific region of responsibility.
By Andrew at 10:10 PM No comments: Links to this post 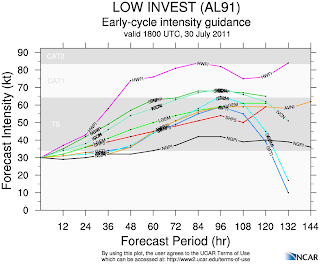 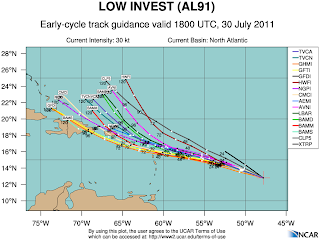 We are tracking a system that may eventually threaten the East Coast.
A tropical system is currently located to the east of the Caribbean region. This system is projected to form into Tropical Storm Emily, and may strengthen from there.
Spaghetti models just above show the storm going towards the East Coast. Additionally, looking at the intensity plots at the top of the page, it looks like the maximum strength for Emily will be Tropical Storm status, as per the model consensus.
By Andrew at 10:00 PM No comments: Links to this post

We will be taking some time off in the next week.
Don't fret- we will update our facebook page daily
and post things on the blog likely daily as we may have a new tropical system in the works.
By Andrew at 8:12 PM No comments: Links to this post

There is a tropical system in the Atlantic Ocean with an 80% chance of becoming a tropical cyclone over the next 48 hours.
Should the storm develop, its name would be Emily. However, for now the system is just an invest, or a pre-tropical cyclone of sorts.

Regardless of if Emily develops, we will se the system make its way through the Caribbean area and head straight for Florida. This is where it gets tricky. There are mainly two options at that stage. Either head for Florida or ride up the East Coast. As of right now, longer range models are bringing Emily up the East Coast. 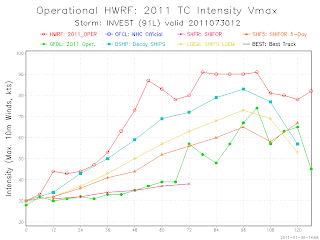 Intensity forecasts favor a tropical storm Emily instead of a hurricane, but there is still that option. The Weather Centre believes Emily will become a weak-moderate Category 1 hurricane at best, and swoop up the East Coast, bringing waves along the shoreline.
By Andrew at 2:00 PM No comments: Links to this post