My winter analog set I presented in my preliminary winter forecast a few months back is doing very well at this point in time after success in the summer month of June, and indications are its success will continue into the winter.

I bring up the analogs' success because of recent developments in the past couple of months. Data shows that the Pacific Decadal Oscillation (PDO), a major driver in the seasonal climate around the world (including North America), spiked to positive levels for the first time this year. Previously, we had been in a solid negative PDO state. I did a little research to find other years that had a quick spike to positive PDO values before dropping back to negative territory, like we had in May and June, and I only found one year- 1951. If you recall, the winter of 1951-1952 is one of my two analog years, the other being 1962-1963. To have one of my analog years already accounting for this quick spike to a positive PDO greatly enhances its chances of working out come winter.

Since the analog set has had recent success this summer, let's see what it is telling for this winter. 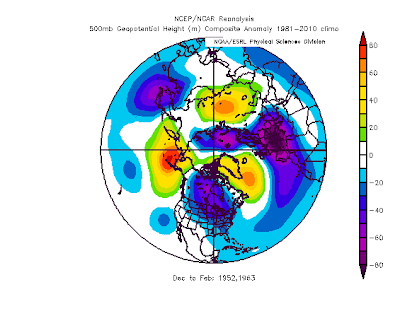 The mid-level atmospheric pattern for the winters of 1951-1952 and 1962-1963 included low pressure across nearly all of Canada into much of the United States. This depression in heights was extended into the Northeast by the presence of a negative North Atlantic Oscillation, depicted as above normal height anomalies in and just south of Greenland. This negative NAO also assisted in below normal temperatures, which I will show a bit later in this post. Anomalous high pressure was also observed in the Bering Sea, which then enhanced the probability of lower heights in North America. You'll notice these two areas of enhanced above normal heights are positioned in key areas. I already discussed why the Greenland height anomaly was important, but the Bering Sea anomaly is also key to the winter. If we see persistent above normal heights in that region for the winter, it greatly enhances the chances of sudden stratospheric warmings, which can then lead to a dismantling of the polar vortex, and that delivers us into our next subject. 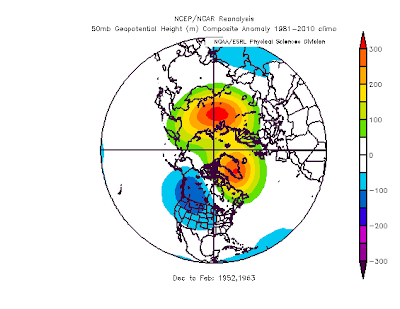 The 50mb level, usually acknowledged as the middle of the stratosphere, is shown to be overtaken by massive above normal height anomalies across the upper latitudes. Typically, one would expect to see the polar vortex over the Arctic Circle, but it has been drastically weakened and forced south into the western North America region. These two large domes of above normal heights tell me the polar vortex did not have an easy time between these two analog years, and if all goes as planned, this winter's polar vortex will not have an easy time either. As I told of in the 500mb paragraph, the Bering Sea high pressure anomaly very well could have played a role, as it typically does with breaking down the polar vortex. 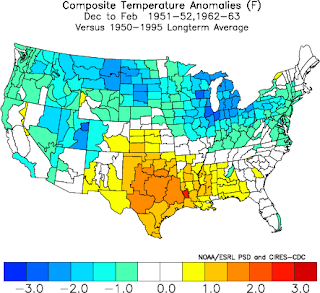 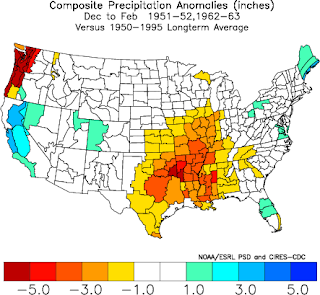 Precipitation wise, the average of the two winters was rather dry across the Southern Plains into the Midwest, especially hitting the Pacific Northwest hard. Areas including the Mid-Atlantic and New England areas had limited success in the above normal precipitation department, but the Southwest ended up as the wettest in the nation. An analysis of the two years contrasted greatly, with a very wet Ohio Valley and southern Midwest in 1951-1952, but a very dry Central US for 1962-1963. It is for this reason that I am skeptical about the precipitation idea for this winter. I feel it will not be as dry as this image indicates, but it could end up a tad below normal in portions of the Plains and Midwest. I'll reveal the whole story in my official winter forecast in September.

Overall, I'm feeling very good about the analog set I have going right now. No problems appear to be arising, and I plan on using these same years for my official winter forecast.

Andrew
By Andrew at 5:09 PM 9 comments: Links to this post

Tropical Storm Dorian has formed overnight in the eastern Atlantic as a result of the vigorous tropical wave I discussed a few days ago getting its act together at sea.

The latest model suite for Dorian has the system placed directly east of St. Lucia in the Caribbean, moving at a generally west-northwest path over coming days. The model guidance above does appear to have a consensus with taking Dorian along the open Atlantic waters towards Hispaniola and Cuba. This is where things get iffy. Some models begin to curve Dorian to the north to allow the system to make a u-turn and move away from the US Mainland and out to sea again. Some other models attempt to push Dorian towards Florida, possibly as a bid for a landfall on the Sunshine State. Still other models (not shown on this image) would appear to want to push Dorian through Cuba and into the Gulf of Mexico, while our last category of models would try to do a re-curve out to sea, but would curve north too late and pose a real landfalling threat to the Carolinas.

The latest depiction of the atmospheric flow for a system of Dorian's strength (1000 millibars or higher) is rather straightforward, but has no model support. Going by this image, Dorian (shown as the 'L' on the bottom right corner of the picture) would go with the flow in a west-northwest pattern, in similar fashion as the model suite. From there, it falls apart. While the atmospheric flow will certainly change in 48 hours, Dorian would likely encounter two options of this overall pattern in the above image were to remain intact:

1) It sees the gap between the two anticyclones in the open Atlantic and pushes through, recurving well out to sea and posing no threat to land.

2) The gap between the anticyclones closes and Dorian is forced south, which could lead to a threat to some northern Caribbean regions, including Hispaniola, Cuba and some other land masses in that area.

As of now, after analyzing the full model suite and some other factors, I would be more inclined to believe the second option, mainly out of both model agreement on a more WNW track over a NW track, and also the tendency for weaker systems to maintain a more westward track.

I bring up the topic of weaker systems because we will see Dorian go through more ups than downs in the next 120 hours. Shown above is a chart of current wind shear values. Dorian is not shown here, but you can see approximately where the system is, shown by a sudden drop in shear values in the bottom right corner of the image.

If we look ahead on this chart and follow the track proposed by the model guidance at the top of this post, we see Dorian heading directly into 40-50 knots of wind shear. That's a lot of wind shear, folks. Dorian will have a very rough time battling this, and we will likely see the system struggle. No matter the track, Dorian is likely to enter that large swath of 40 knots of wind shear extending from the northern fringes of South America well out to the eastern Atlantic.

As of now, I prefer the current model suite in the top image to the extent of when it begins to approach the waters north of Hispaniola. Beyond that time frame, the models become too muddled and uncertainty grows to a point I believe a forecast will be unsuccessful.