It's looking very likely that there will be a snowstorm for the nation between December 13 and 16, and there is a decent possibility that it will be significant.


The operational ECMWF model projects the event to be a result of two separate pieces of energy- one from Canada, and one from the Southwest. You can see the Canadian energy shown as the white streak pointing southwest-ward into Kansas, and the Southwestern energy depicted as the dip in the contour lines in far southern Missouri. It is expected that these two systems will bring the potential for anything from a winter storm, to a monster of a winter storm. But that isn't shown here because of some disagreements.

Model guidance is in disagreement on the track of this system, as well as the question to if it will phase (merge). The idea here is that if the two pieces of energy are able to emerge from Canada and the Southwest, respectively, at the right times, then they may combine to form a potentially significant winter storm system. However, some model guidance prefers to either phase the systems further to the east, giving the northern Ohio Valley some very heavy snows, or not even phase them at all. I'm not sold on this non-phasing idea, and to be honest, I think the systems will actually phase further west than what is being shown. Why? I'm glad you asked. 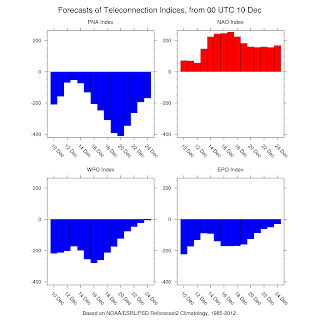 Teleconnection projections for the Pacific-North American index (top left), the North Atlantic Oscillation (top right), the West Pacific Oscillation (bottom left), and the East Pacific Oscillation (bottom right) are shown in the image above, composed by the Earth System Research Laboratory, or ESRL. Taking a look at the PNA forecast for the December 13-16 timeframe, we see the index moving towards positive territory, but not really getting there in time to flip the Pacific North American index from negative (unfavorable for a huge East US snowstorm) to positive (favorable for a East US snowstorm).

Now, the negative PNA means that high pressure will be present off of the West Coast, so the mid-latitude jet stream will be able to dive south to deliver storms to the Rockies. An additional jet stream system (you weather junkies know it as the subtropical jet stream) that tends to stay around the Deep South is pushed northward due to the emergence of high pressure in the Southeast. If you look towards the middle of the nation, we see those two jet stream systems pairing up and moving northeast. You guessed right; such a development would support the earlier phasing (or at least some form of phasing) idea I illustrated earlier. But we've only scratched the surface.

Going back to the ESRL teleconnection forecast, we see that the NAO is projected to be positive throughout this timeframe. This positive NAO will keep the overall weather pattern quite progressive, meaning the probability of stagnating high and/or low pressure systems is lowered. Usually, this would go against the idea of the two pieces of energy phasing, but if the progressive flow can limit the ridging in the Southeast provoked by the negative PNA, it's possible we see a very ideal set-up for the phasing of these two storm systems.


There is also the idea from model guidance that a secondary low pressure system may form over the waters off the Northeast to produce a very snowy situation for much of the Northeast. I am skeptical of this idea for a few reasons, one of the more pronounced ones being the presence of that positive NAO. Usually, a positive North Atlantic Oscillation is progressive and does not support the formation of these coastal Nor'easters. Adding to my skepticism is how models are doing really poorly with the conditions in the Pacific right now, where the energy for the main storm and possible secondary low is. Thus, model guidance for both events isn't really being viewed as entirely trustworthy. I'd like to wait for the models to work themselves out on this initial storm first before we open the idea of a secondary low forming in the Northeast. I'm not completely shutting the door on the idea, but I'm also not exactly in favor of it just yet.

Adding to my thinking that these two pieces of energy may very well phase more east than is currently projected is because of a very prevalent model bias among global modeling systems.

It has been determined by meteorologists who carefully analyze and work with the models that there is a tendency for models to eject energy coming out of the Southwest too quickly than how it actually ends up unfolding. This means that it's very possible (some would even say likely) that the two pieces of energy I pointed out at the top of this post may look very different- the energy coming from the Southwest may end up further west than the current solution shows for the timeframe above, which is early on Saturday morning. I do think that the models are displaying this bias yet again, and the trouble in the Pacific doesn't help a bit, as I'll explain below. If we do see a slowing down in the model solutions with that Southwestern energy, expect the chances of a phasing solution to be on the rise, and the possibility of an even bigger storm rises as a result.

The issue with the Pacific is that we don't have nearly the amount of sampling in the Pacific like we do in the United States. What's sampling? It's what happens when the National Weather Service offices send up the big weather balloons twice a day, with monitors attached to them. Unfortunately, we don't have any of these NWS offices in the middle of the Pacific- we only have buoys, commercial aircraft, and satellite measurements to give us a rather mediocre depiction of what's happening in the Pacific, as is explained by Cliff Mass in his blog post. I say mediocre, because while those buoys, satellites and commercial aircraft do help in giving the models some data to work with, they are nothing compared to the radiosondes that go up with the weather balloons. That said, I expect models to be dicey with this storm for the next couple of days, before the energy gets into the network of radiosondes, which should greatly help model accuracy.

Speaking of model accuracy, take a gander at this discussion of the models from the Weather Prediction Center on this storm:


A PROGRESSIVE TROUGH OF SHORT TO MEDIUM WAVELENGTH WILL ARRIVE
ALONG THE WA/OR/NORTHERN CA COASTS BY 13/00Z. THE CHARACTER OF
THIS SYSTEM...COMBINED WITH ITS INITIAL POSITION OVER THE DATA
VOID IN THE PACIFIC...IS CAUSING SOME DIFFICULTY IN THE MODELS.
THE GFS AND NAM ARE CERTAINLY FLATTER...GIVING THEIR SOLUTIONS A
LITTLE EARLIER ARRIVAL TIME ON THE COAST. THEY ALSO TAKE HEIGHT
FALLS EASTWARD INTO UTAH WITH LESSER HEIGHT FALLS GRAZING NORTHERN
ARIZONA. MEANWHILE...THE ECMWF AND CANADIAN INDICATE A MUCH MORE
PRONOUNCED SPLIT OF THE UPPER ENERGY BEGINNING LATE ON DAY
2...ALLOWING A ROBUST SHORTWAVE TO DIG FARTHER SOUTH. SOLUTIONS
FROM THE CANADIAN ARE RELATIVELY CONSISTENT...AND DIG THIS TROUGH
TOWARD WESTERN ARIZONA...AN IDEA THAT HAS SUPPORT FROM SEVERAL OF
THE 00Z ECMWF ENSEMBLE MEMBERS. THE OPERATIONAL ECMWF SHOWS MORE
RUN TO RUN VARIABILITY...THOUGH...AND HAS BEEN ONE OF THE
DEEPEST/FARTHER WEST SOLUTIONS. THE 12Z RUN...IN FACT...CLOSES A
CIRCULATION BACK OFFSHORE OF SOUTHERN CALIFORNIA BY 14/00Z. ONE
COULD SAY THAT THE 12Z UKMET SUPPORTS THE ECMWF...BUT ONLY
LOOSELY...WITH THE UK SOLUTION BEING EVEN FARTHER WEST AND COMING
ON THE HEELS OF A 00Z RUN THAT WAS LESS THAN INSPIRING/WAS A SLOW
OUTLIER/. GIVEN THE AMOUNT OF UNCERTAINTY...WE RECOMMEND A BLEND
THAT GETS TOWARD A MIDDLE GROUND SOLUTION. IN OUR FINAL PREFERENCE
WE REPLACED THE GFS WITH THE CANADIAN...AS THE GFS NOW APPEARS TOO
FLAT/PROGRESSIVE VERSUS THE FULL 12Z SUITE.


The consensus does appear to be that models are really having trouble here, and the WPC recommends going with today's GEM (Canadian) model, as well as last night's ECMWF ensemble grouping. Because I'm always a bit suspicious of the GEM model, we'll take a look at what last night's 0z ECMWF ensembles say.


The 0z ECMWF Ensemble set has this storm system traveling from Arkansas to Ohio, as I outlined with the yellow arrow. Such a set-up is very conducive to heavy snows in the Lower Great Lakes, Midwest and Ohio Valley, though the ensembles only drop a handful of inches of snow from Illinois to Indiana before the system really gets cranking further east. Again, that southwest bias is still in play here, so I'm skeptical about this solution (and all others) as well.

Here's my preliminary outlook on this system, subject to potentially drastic change. 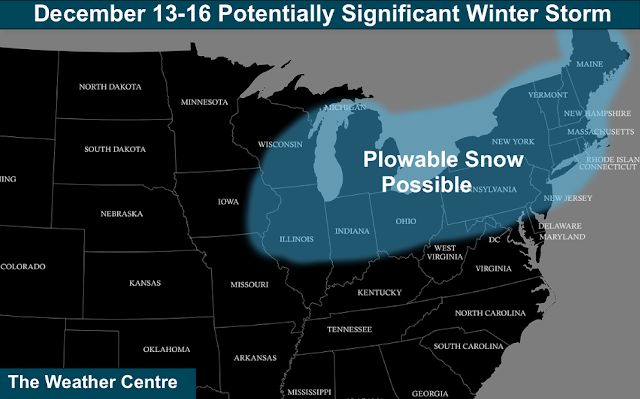 Andrew
By Andrew at 6:41 PM 6 comments: Links to this post