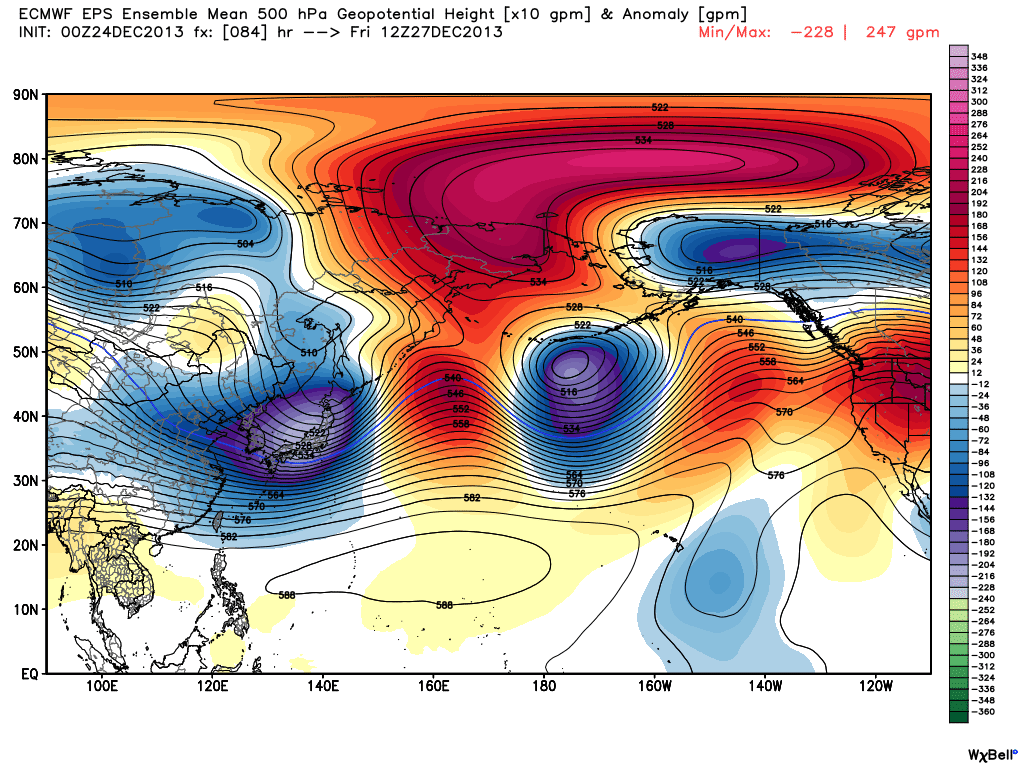 I'm still keeping an eye on the January 2-6 time frame for a potentially significant winter storm.

In a similar set-up to this past weekend's winter and severe storm event, we see a strong storm system passing over East Asia on December 27th. Using the correlation that states weather in East Asia is reciprocated over the United States 6-10 days later, it is logical to believe that the January 2-6 period may see a winter storm. The reason I say it is potentially significant is because this same instance happened 6-10 days before this past weekend's storm, where a strong system hit Japan. Then, this past weekend, we saw the severe weather and significant snow/ice that qualified the event as a significant storm system. The strength of that Japanese trough only tells me that we are in for another potentially big storm system come January 2-6. 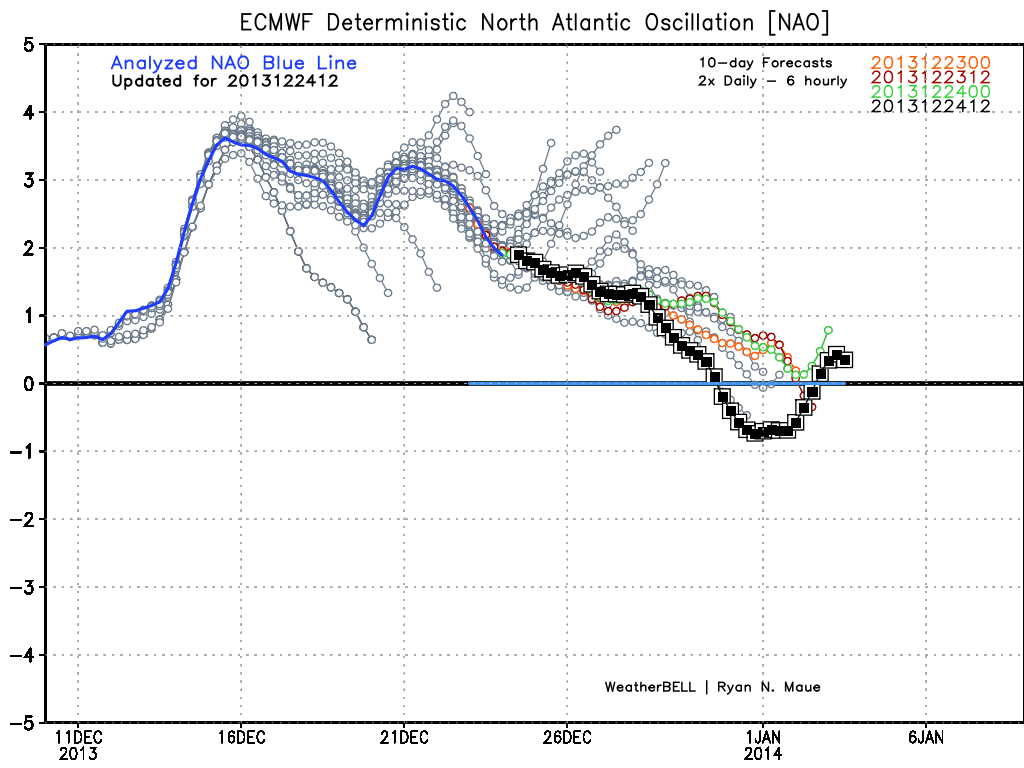 The atmospheric set up for this potential storm is looking pretty interesting. The North Atlantic Oscillation (NAO), whose forecast is shown above by the ECMWF model, is projected to continue a recent weakening trend to negative territory by the time New Year's Day comes around. This means that the high pressure that has been dominating the Southeast will finally be gone. This also means that the door for East Coast storm systems will be open for once in the last while. And despite the NAO then projected to rise again (which is very possible (even likely)), the risk of East Coast storms will remain in place, albeit diminished. 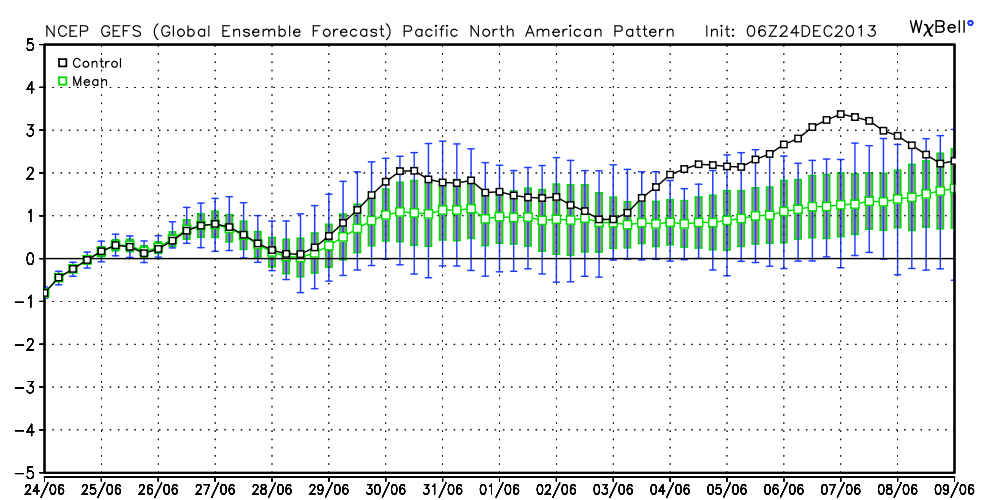 The reason the door for East Coast storms will remain open is because the Pacific North American (PNA) index is projected to be positive in the long term, especially during this timeframe. The GFS Ensembles predict that the PNA will remain positive through January 2-6, meaning the Southeast ridge should be suppressed. Thus, storms will be able to cross through the Southeast, and possibly even make their way up the coast. Because of this +PNA forecast, the track for this potentially significant storm is still up in the air. Right now, I would outline the Ohio Valley and East Coast for potential areas in line for this storm. I say the Ohio Valley because that possibly-positive NAO may not allow for an East Coast storm, and I say the East Coast because the PNA will be positive, which will allow for suppression of the dreaded Southeast ridge that has fended off East Coast snowstorm chances for a while now.

Still a lot of items to be figured out, but I feel comfortable saying that there is potential for a significant winter storm around the January 2-6 timeframe, and that this storm may affect the Ohio Valley or East Coast (with other locations also still in the mix).

This will most likely be my last post for the day, so a Merry Christmas & Happy Holidays to everyone!

Andrew
By Andrew at 2:15 PM 2 comments: Links to this post

The new run of the ECMWF Weeklies sends the polar vortex crashing down into the United States -- twice.


The forecast from the European weeklies above shows a lobe of the polar vortex plummeting from the upper latitudes to the Eastern US, bringing extreme cold weather along with it. The 850mb temperature anomaly forecast above shows anomalies as low as 26.3 degrees Celsius below normal. Converting Celsius to Fahrenheit tells us that 26.3 degrees below normal is the equivalent of 47.34 degrees Fahrenheit below normal! Considering average highs across Georgia range from the 50s to the 60s, we would be talking about highs in the single digits in southeast Georgia if this forecast verifies.


The scene is repeated again nearly a week later, as the ECMWF Weeklies take another polar vortex lobe and drop it down into the Northeast, bringing another bout of frigid temperatures along. Temperature anomalies are not as intense, but the message of anomalously cold weather hitting the East still gets through loud and clear.

So, could this happen?

Yes, but it probably won't. The polar vortex is projected to be split up into two vortices (one in southern Canada, one towards Eurasia) as ridging takes over across the Arctic Circle. And while anomalously cold weather is possible as the vortex stationed in Canada is moved closer to the United States, I can't foresee a massive breakdown in temperatures involving a polar vortex lobe collapsing into the United States. It's a possibility, yes, but a very small one.