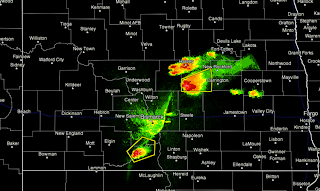 We are closely watching erupting thunderstorms over North Dakota at this time.
Tornado Watch #649 is in effect for Central/East North Dakota as well as Northwest Minnesota.

Synopsis... Over the last while, thunderstorms have been erupting in North Dakota with vigor. One storm went tornado warned, but has since weakened.
We have identified an area near Bowdon, ND where VIL's are particularly high, indicative of very large hail.

We will have more updates
By Andrew at 7:11 PM No comments:

Using patterns over the last several years associated with the Nino 3.4 index (the index that determines La Nina/El Nino), we were able to map out 3 examples over the past several years.
All these examples have at least one thing in common:

•La Nina conditions either completely faded away or deteriorated in the summer, then made a resurgence in the winer months.

What does all this data mean to me?
It is a good indicator of what could come this winter. The above two images are probably the best two indicators of what could happen this winter, so it would be wise to use these as a reference at this time.
By Andrew at 1:28 PM No comments: