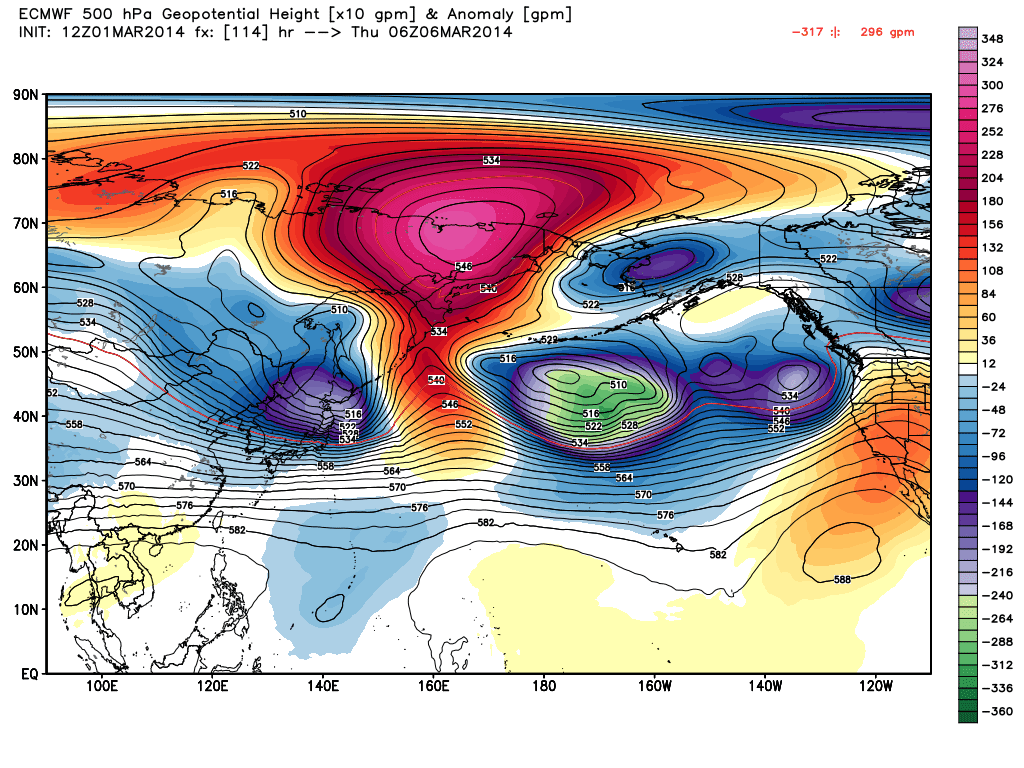 Shown above are ECMWF model projected 500mb height anomalies over the North Pacific, valid on March 6th. We want to take a look at Japan in this image, which is on the left-hand side of this graphic. If we look at Japan, we see deep purples over the island nation, indicating the presence of anomalously low heights. This tells us there is a storm system afoot; the purples indicate the storm is of the stronger variety when compared to other systems. How can weather in Japan relate to weather here in the US? If we use the 6-10 day correlation, explained by Joe Renken, which states that a storm system in Japan can affect the United States 6-10 days later, we find that this storm system would be expected to create a storm in the United States during a March 12-16 time period.

There is something I'm watching in this time period and on model forecasts. If you were to animate the maps over the North Pacific, you would find that it almost seems like two separate systems impacting Japan over the March 6th time period, but the proximity to one another makes it seem like one big storm. It might take a little while to determine if this really is one strong system or two moderate systems, but until then, it's better to err on the side of caution and discuss how a single, strong storm system could impact us.

We can actually figure out the projected track for this storm as well, by using a tool titled the Lezak Recurring Cycle. The Lezak Recurring Cycle, or LRC, is a tool developed by meteorologist Gary Lezak that, in essence, can enable forecasters to predict the overall weather pattern months in advance. The gist of the LRC involves a cycling weather pattern that develops in October and November of each year; no pattern is the same from year to year. Around mid November, the LRC begins to repeat, meaning we start to see a similar weather pattern in mid November that we saw in early October. This means that the cycling pattern has begun, and it will continue to cycle on a regular, unchanging 40-60 day interval for the next ~10 months before it dissipates over the following summer. Since this season's cycle has been holding at around 57 days, we can go back from the March 12-17 period and arrive around the  January 16-20 time period. The image above shows observed 500mb height anomalies from the January 16-20 timeframe, where North America is located on the upper right portion of the image. If we look at what the atmosphere was like in that mid-January period, we find a defined northwest flow scenario, with strong ridging over the West Coast leading to deep negative height anomalies across the East Coast. The jet stream below for the same January 16-20 period reflects this northwest flow.

If you're a weather buff, you probably know where I'm going with this. If not, pay close attention. The northwest flow scenario involves the jet stream shooting north into Alaska due to that massive ridge of high pressure, before plummeting south into the Southeast and then north again across the East Coast. In the January 16-20 period, we also saw support from the subtropical jet stream, which helped to enhance wind speeds and phase the two jet streams. If a storm were to come along during this northwest flow scenario, it would most likely become enveloped in the jet stream, and become a coastal storm. To sum up, if the LRC cycles again to be even somewhat close to what we saw in mid-January, I would anticipate a Nor'easter or some sort of coastal storm for this March 12-16 period. Lots of time for this to play out, but historically, the East Asian correlation and LRC have been doing very well, and I see no reason to discount them now.

Andrew
By Andrew at 3:01 PM 4 comments: Links to this post