There is increasing potential for a winter storm in the February 1-5 period. 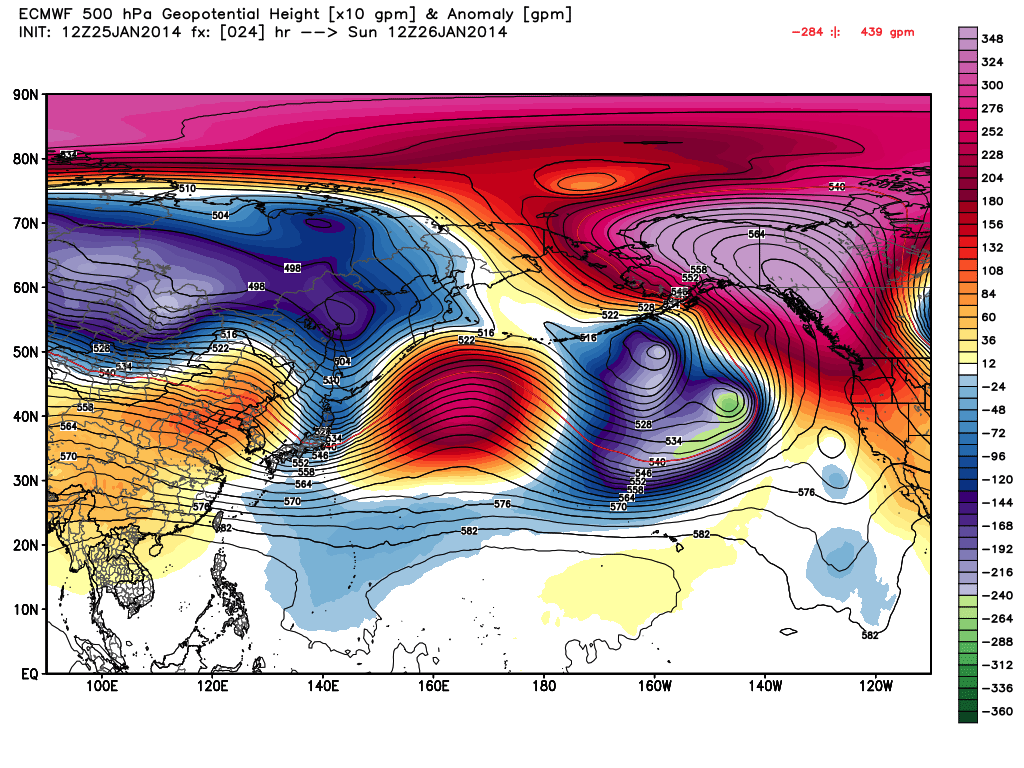 Shown above is the 500mb anomaly forecast off the ECMWF model, valid on the morning of January 26th. If you've followed this blog for a while, you know that we can use that area of negative height anomalies over Japan to forecast a storm in the United States. As Joe Renken states, we can extrapolate a storm over East Asia out 6-10 days to arrive at the timeframe for a storm here in the United States. Going that length past January 26th gives us a storm timeframe of February 1-5. That's not the only thing we can take away from this predictor, however. Looping the ECMWF forecast tells me that the storm system will be moving essentially due east as it passes through central Japan. This tells me that we could (keyword here is could) see our February 1-5 storm system also moving on a west-to-east track, not really curving north or dropping south too much. The 12z and 18z GFS models caught on to that idea of a west-to-east storm, but had the storm hitting the US on January 31st to February 1st, which is just outside the timeframe presented here. We'll discuss the models a bit later on in this post.

Adding to the evidence of a possible storm in the early February timeframe is what we saw happen in the Bering Sea on January 18th. The image above shows contoured 500mb height anomalies over the north Pacific on January 18th. We see a storm system moving east from far northeast Russia, which is the westernmost 'X' on the image above. The next day, we saw the storm move nearly due east to the second 'X' in the image, only moving just a bit north in the process. Going back to that link I posted above, there is also something called the Bering Sea Rule, developed by Joe Renken. The Bering Sea Rule states that a storm in the Bering Sea can result in a storm over the United States 17-21 days later. If we extrapolate the January 16th date out using the 17-21 day timeframe, we arrive at a potential storm in the February 2-6 timeframe. This fits well in the February 1-5 timeframe we got from the East Asian correlation, and the nearly west-to-east movement in the Bering Sea tells us the storm in the US may be west-to-east as well, like we saw in the ECMWF forecast.

Now, model guidance is pretty iffy on the timing of this storm, and that is to be expected. The GFS model wants to bring a zonal (west to east) track storm through the US, but on the January 31-February 1 timeframe rather than the early February time periods established by the East Asian correlation and the Bering Sea Rule. The ECMWF model brings a west-to-east track storm system through the US on February 2-3, which fits right into the two time periods we established above. However, the ECMWF is much less robust on snow totals; the GFS allows significant snow in the January 31 forecast above, while the ECMWF only lays down a handful of inches from the Plains to the Great Lakes.

I think we'll end up seeing a compromise, where the GFS slows down the storm to the ECMWF's timeframe of the first days of February, but we see increased precipitation amounts like the 0z ECMWF and 12z + 18z GFS put down, rather than the weak amounts put down by the 12z ECMWF model.

Andrew
By Andrew at 8:36 PM 4 comments: Links to this post

Arctic air not seen since the early January outbreak is set to arrive on Monday in the Plains before flooding the northern US into Tuesday and Wednesday. Let's break down who will get the cold weather, and when.

The ECMWF indicates we will see the core of the cold start out in states like Minnesota, North Dakota and Iowa on Monday, as this temperature forecast image for Monday morning shows. Below zero temperatures are expected from central Indiana back northwest, with temperatures below -20 degrees F anticipated in the aforementioned northern Plains states. We are likely to see school closings throughout the upper Plains on Monday as this cold filters in, with widespread cancellations possible. 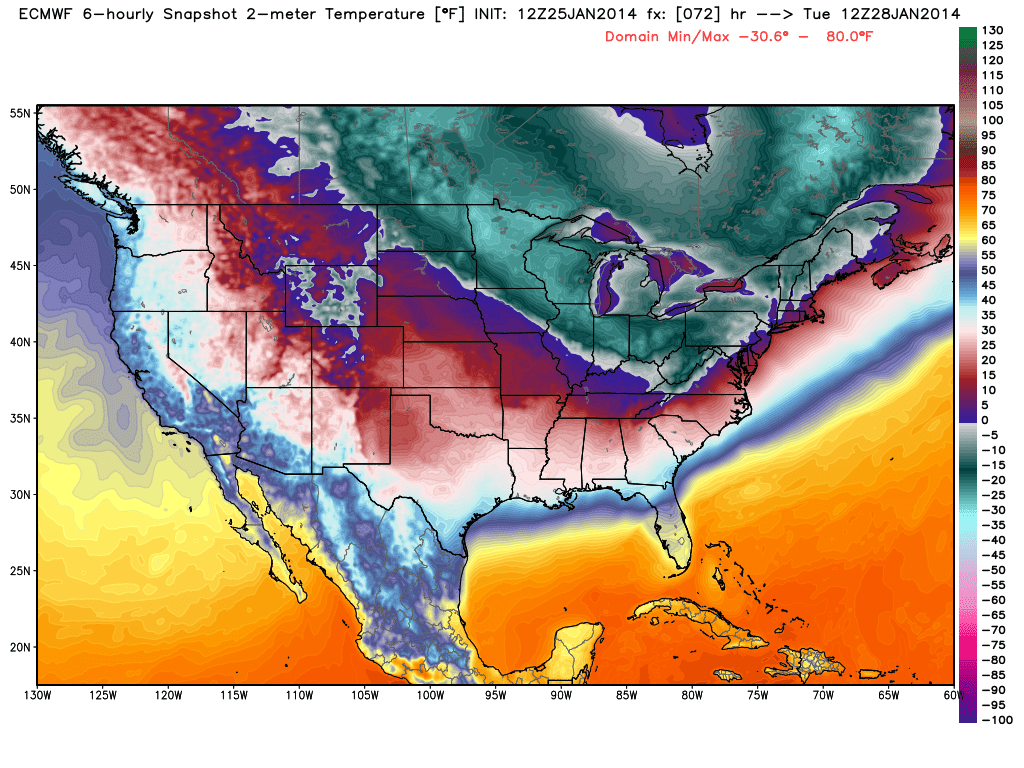 Tuesday morning is when the Arctic air really flexes its muscles. We see the ECMWF model taking temperatures as low as -30 degrees F to Minnesota and Wisconsin, while giving cities like Indianapolis, Madison and Chicago severe cold that could easily flirt with -20 degrees F. The Northeast will begin to encounter these frigid conditions, as below-zero temperatures are forecasted to hit the entire region, except for areas immediately near the coast. I expect widespread school cancellations across Minnesota, Wisconsin, North Dakota, Illinois, Michigan, Indiana, Ohio, West Virginia, and additional closures throughout nearly each state in the Northeast. The Great Lakes will work to warm up those to the east of the bodies of water, as you can see in western Michigan and western New York. 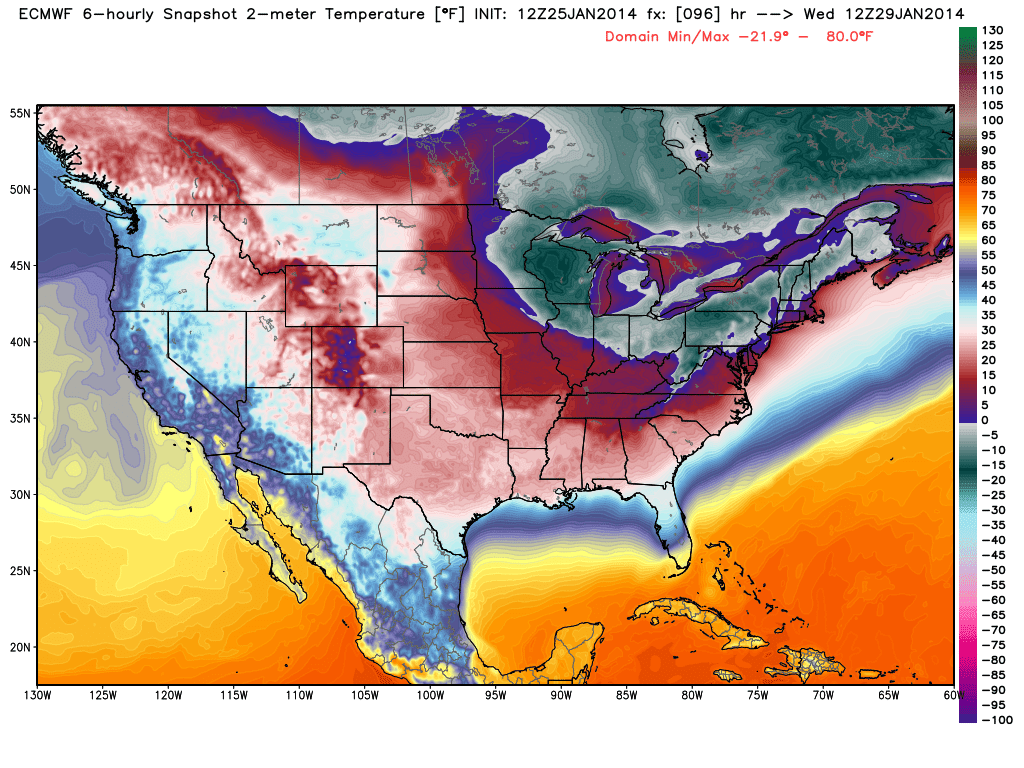 The cold weather will begin moving out of the Plains on Wednesday, but not before another frigid morning brings well below-zero temperatures to Wisconsin, with other negative temperature values found in Minnesota, Iowa, Michigan, Illinois, Indiana, Ohio, and across New England. School cancellations should be considered a possibility in Wisconsin, Minnesota and western Pennsylvania. Cancellation prospects are a bit more iffy in the other states I mentioned.

A few tips for the upcoming cold blast:

If you absolutely have to go outside, make sure to follow these tips:

-Minimize time spent outdoors. Even if you have heavy winter clothing on, this weather means you must be indoors as much as possible.

-Load up on clothing. Any and all coats, jackets, hats, gloves, mittens... this is extremely dangerous cold weather that is not to be taken lightly. This isn't your average winter cold spell- this is the kind of weather that is more typical of the Arctic tundra.

-Protect your pets. Fur isn't going to suffice this time around- keep your pets indoors at all times. This is just as dangerous to them (if not more dangerous) as it is to you. If you have to take them outside for a walk, put some clothes on them. As silly as it sounds, it might just save their life.

-Stay indoors. As obvious as this tip may seem, some people need that extra reminder that they aren't invincible to all cold weather, even with heavy coats and jackets.

Andrew
By Andrew at 1:48 PM 4 comments: Links to this post