East Coast May Be Threatened By 'Sandy'

Models are going crazy over the potential for both a snowstorm and a hurricane to hit the northeastern quadrant of the US (Ohio Valley, Northeast, Mid-Atlantic). Let's jump right into this.

First, I will discuss the tropical aspect of this system. Then, I will hone in on the snowfall aspect.

This is the little invest that could cause a very extreme Halloween on the weather spectrum. Invest 99 currently resides in the Caribbean, with a 70% chance of development in the next 48 hours as declared by the National Hurricane Center. The system is expected to stay stationary before moving north. During this time, strengthening into a named tropical system may very well occur, and models are favoring such an idea. Here's a gathering of the models for 48 hours out. If the invest strengthens to a named storm, it will be called 'Sandy'. 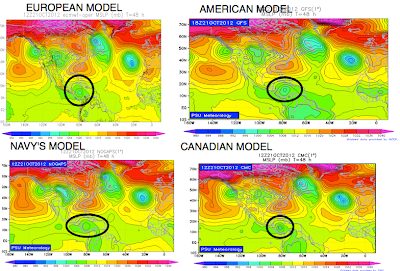 All the models are in pretty good agreement that the system will likely strengthen into a tropical storm or something of similar strength. At this point, we can pretty much say that the next 48 hours will not threaten the US mainland.

But there's a different story later on...

The models begin to change forecasts and vary on strengths past the 5 day mark. Let's look at a gathering of the models as far out as they can go. TIP: To see the number of hours this forecast goes out to, look for a 'T = (number of hours) h' on top of each image.

Let's do a model-by-model breakdown of each forecast. Note, confidence levels do not add up to 100% in the end.

NAVY'S Model (NOGAPS):
This model keeps Sandy modest and only moderately strong as it gets dangerously close to Florida. While this seems the most realistic in comparison to stronger forecasts, the NOGAPS does not have a good track record. Confidence level: 15%

European Model (ECMWF):
The ECMWF is an amazing model and commonly claims the best forecasting record when it goes up against other models. It is showing a very strong landfall in the Northeast/Mid-Atlantic, which could seriously hurt the cities closest to the coastline. Despite the ECMWF's great track record, this is the long range forecast, and that must be factored in to my confidence level. Confidence level: 40%

Canadian Model (CMC/GGEM):
The Canadian model is horrible at long range forecasting, and is absolutely terrible at tropical cyclone forecasting. I'm not even going to think about this model's forecast for the time being. However, the fact that it holds some similarities to the ECMWF and GFS is slightly encouraging. Confidence level: 5%

American Model (GFS):
The GFS claims second place in the best model race right behind the ECMWF. A recent update to the GFS has drastically improved its forecasting abilities, threatening the ECMWF for the title of best model. The ECMWF and GFS are fairly similar, but the ECMWF goes inland while the GFS does a 'drive by' on the East Coast, where it hits the region and goes back out to sea. I'll need some more runs of the GFS to be more confident in this one. Confidence level: 30%

All in all, I believe the East Coast should definitely be prepared. It's always better safe than sorry, and the fact that so many models are even thinking of threatening the East Coast is worrying. Watch for more information coming in the next few days.

This is the part many of you have been waiting for. So, without any further ado, let's check out the snowfall forecasts.

This is the ECMWF snowfall forecast for 240 hours, of 10 days away. As you can see, the effect on Sandy going inland is huge- over 20 inches of snow hits Michigan and even more in southern Canada! Several inches of snow are also found in Mid-Atlantic states and parts of the Ohio Valley and Northeast.

This is indeed big, as it is from the ECMWF model. However, one must remember that there are many models out there, each with their own possibilities. So, take the above for what you think it's worth (I don't think it's worth much at the moment), and let's move on to the GFS.

The GFS is much less enthusiastic, and it should be. This forecast of the GFS has the hurricane get dangerously close to the coast before turning back and heading off into the ocean. Again, it's much different than the ECMWF, as the latter goes inland into Canada. Also, both models are in the long range, and all long range forecasts don't have the best chances of verifying, no matter the model.

It will depend on where the system ends up to determine just what (if any) snow falls on the eastern part of the nation. One slight movement in any direction could drastically alter Sandy's course and thus the effects it will have.

'Sandy' May Pose Threat To Northeast

There is a disturbance brewing in the Caribbean that may very well become 'Sandy', the next name for a tropical system in the Atlantic.

Satellite imagery indicates a fairly disorganized area of a few clusters of defined thunderstorms and a pretty barren western flank of the system. However, it does appear that convection has been increasing in recent hours in association with this system, indicating that this tropical wave's potential to develop is increasing. Let's look at some of the model forecasts on this system. 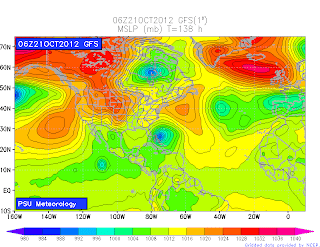 The 6z GFS takes the system north, to the point that it is just east of Florida by the time the next full week passes. At that point, low surface pressure tells me that Sandy would have already developed and been named.

If we keep looking at what lies ahead of the tropical system, we see a ridge of high pressure just off the East Coast, with another one in the Western US. This puts the disturbance in a difficult spot. I could see Sandy moving west and actually hitting the Mid-Atlantic, but we'll have to go further into the model's forecast to see what happens. 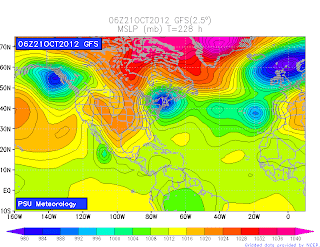 The Long Range GFS ends bringing an even stronger GFS well into the Northeastern US as what could be a very strong hurricane. At the moment, considering this is the long range, I'm not too worried, but the presence of even the notion of such a strong system hitting the Northeast is concerning in itself. Again, this is in the long range, so take it for what it's worth.

It should be noted that, as the system makes landfall, temperatures as low as 15 degrees (F) may hit much of the central US and Midwest. 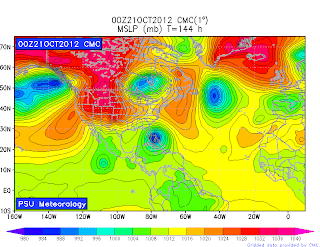 The CMC is even stronger with this system, but remember that the CMC vastly exaggerates tropical systems to the point of absolute insanity. That said, I won't show any further forecasts of the CMC, but will leave you with this image and let your own imaginations take over.

I urge the East Coast to closely watch this system as it may have future implications on where Sandy eventually landfalls.

Models are indicating that a cooler and stormier pattern will emerge following the warm up that will strike in the first half of this week.

Above is the ECMWF and GFS 8-10 day 500mb height anomaly forecasts. Blue areas show stormy areas, while red portions of the charts indicate the presence of a high pressure system. The deeper a color is, the stronger its respective apparatus is.

The GFS and ECMWF are different in their forecasts of the 8-10 day period, with the GFS keeping a very stormy pattern ongoing across the northern US. The ECMWF is stormy in the East, but holds a ridge in the West. I believe that the ECMWF is underestimating its forecast- a positive PNA pattern like the one shown on the left creates multiple disturbances across the East, something the ECMWF is showing in its regular forecasts but not here. I think the GFS is on track with a stormy pattern in the East, but is not including the positive PNA that will likely develop after this warm up.

Temperatures will likely plummet towards the end of the week as models are showing what could be a very strong disturbance bringing very cold weather into the heart of the nation.